The dreaded chicken wing swing can make your ball striking lack speed and consistency. This most recent RST student success story, finally allowed him to overcome an issue that has plagued his game for years. I'll show you a simple and effective drill that will allow you to get into a much more powerful impact position and give you that awesome extension you have always been wanting. Understanding the cause of your problem and having a drill like the one in this video, will get you playing your best golf ever! 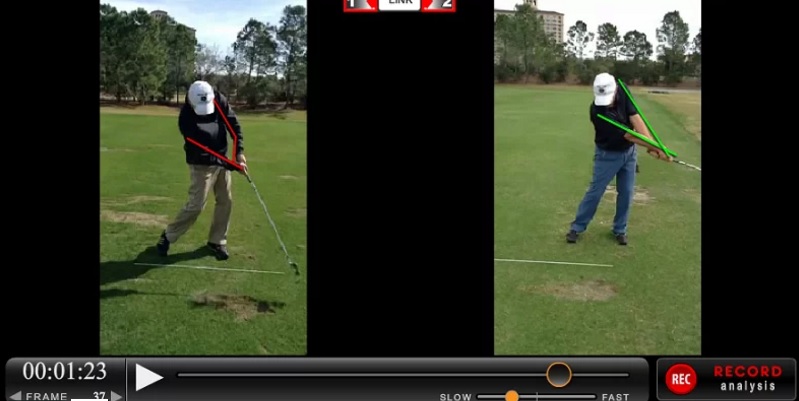 . If you've been struggling with that ugly, dreaded chicken wing look and never really had a solution on how to get rid of it, I'm going to show you this really simple and effective drill that we were able to do with a RST student here that actually cured his impact position and got him into a much more extension through the hitting area. Let's go ahead and take a look at this.

Okay, guys. This is Kevin. Kevin has been a member of Rotary Swing for a number of months now and has been battling and been struggling with an issue known as the chicken wing. A lot of us have really encompassed that particular move in our golf swings and it's really coming from an overpowering mode from your trail side of your body.

I want to show you a good drill that we were able to work through and get him going into a good position where he's got a much better impact position now. He's got much more extension through the hitting area. Now, his ultimate goal is going to be ramping up his speed the more he becomes comfortable with the movements of the body. He's doing an absolutely fantastic job. I want to show you the processes that we work through here.

If you pay attention to over here on the left hand side of the screen, this was our starting point, where you can see at the top of the swing we've got our spine now leaning more towards the target. Very dangerous position here on the lower part of your back here, the lumbar spine.

We want to make sure that we got him into a position where he wasn't going to have to use just his hands and his arms and his shoulders on the downswing move. If you look over here on the right hand side of the screen, we worked on getting him into a much more loaded position here at the top.

We're going to continue to try and get more rotation out of this move. The more we start to load this trail side up, this is still a work in progress, but at least we've got it into a position where we haven't over rotated the spine here. We've got some ability to be able to use the lower half.

Now, because we don't have anything else really loaded up in the swing except for the hands and the arms and the spine now, leaning the other way it wants to actually start to fire and get out of there really quickly. Now, the arms, the right side is going to push really hard through the hitting area here. You're going to see this is where we start to get a lot of separation between the forearms and the right arm is really pushed here through the hitting area. Let me back up just a few frames.

Most of his release was all done from the right hand. All right? He was slamming the door shut really hard with the right, club was coming in just a fraction on the steep side. In turn, he was actually having to squeeze really hard with the left hand, which was slowing the club face down.

Now that we've got a good load into that trail side, now we can use the lower body to start to drive the downward move here. You're going to see that he's going to make this small, squat shift move over to the lead side. Then, from here he's clearing the hips out and then releasing the club through and getting a lot of extension through the hitting area. He's done an absolutely fantastic job of ridding himself of this problem.

If you've been battling with getting into a poor impact position and trying to figure out what the ultimate solution is, it's caused from a lack of prioritizing your downswing properly. It's caused by your trail side really trying to do way too much through the hitting area. The order of business that we tried to work through his particular issue was, is we started off with the flagpole concept to just try to create some understanding of what we're going to be trying to do with downswing sequence and where we need to go to be able to get into a position to sequence properly.

Then, we worked on a drill that was from the release for clubhead speed video. That was where we had Cory Cooper come into town, who is a golf professional, who is having some issues with bringing too much lag down into the hitting area. Obviously, not the case here with Kevin, but we still were able to chunk up a drill like that. Then, we worked on a lose the right hand drill, incorporated that with a nine to three drill.

All of those things really took shape together. In turn, we were able to overcome the really big issue that's been nagging him for quite some time. Now, his job is just to continue to build more rotation to the back, start to ramp up the speed to this and he'll be well on his way to be playing some of his best golf.

All right, guys, let's take a look at those videos. If you've been struggling with any of these areas like that dreaded chicken wing or getting into a bad impact position, really take a look at these videos and make sure that you understand that there is a process. Take your time and you'll be well on your way to playing great golf just like Kevin. Let's make it a great day.


JOIN OUR 396,337 MEMBERS AND GET INSTANT FREE ACCESS TO DOZENS OF VIDEOS!