Discover the release that is best for you and your swing that will give you the fastest results and most consistent shots. 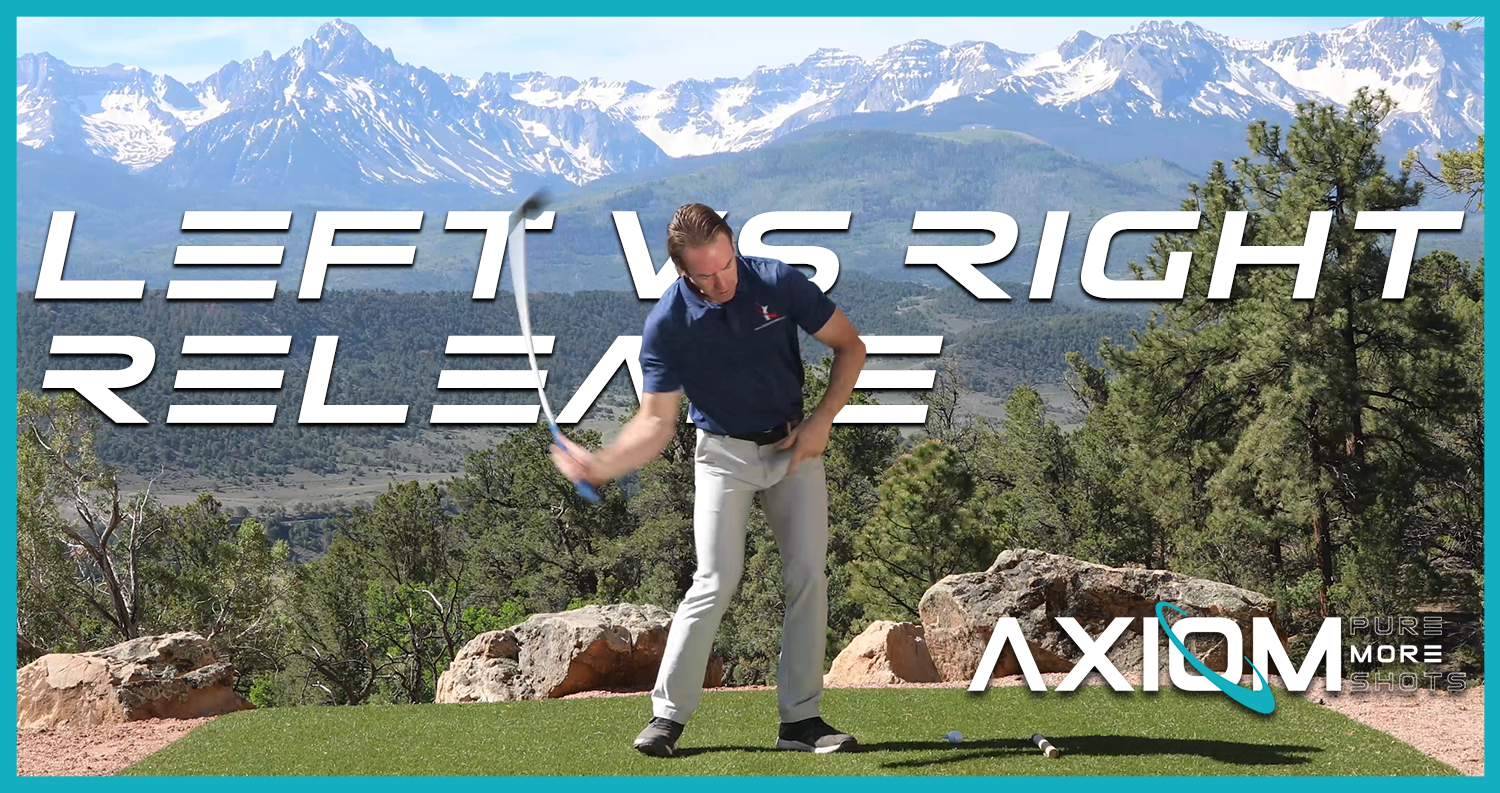 Now that you know, that there are two very different feeling, ways to swing the club, be their lead arm, dominant or trail arm dominant. Let's talk about how that applies directly to the release. And I've got two little tools to help me feel this and demonstrate it to you that you can also use at home to feel for yourself. The first one is a little homemade flail. I made it's just a stick with a string with a ball attached to the end of it. And you'll see how I use this in just a moment because it makes it really, really easy to feel the Braddock differences in these two motions. And then we also have a G-Force club, which is just a club with a very flexible shaft that we sell at our training aid store. That helps you feel this as well, but let me show you what it looks like and feels like with the lead, our motion only first, because this is the one that a lot of people associate with the golf swing.

It's more of a, I hate to say the word old school phrase, old school, but that's kind of how the swing has always been thought of over time is this very gradual lead arm motion. And a lot of the best players of all time have swung this way. But of course, as the golf swing has changed and more athletic golfers have become into the game. It's tended to start to shift, to be more of a trail side dominant, but both produce the same results, but they're two very different feelings. And I'll talk about the differences in just a moment. So let's first talk about this lead arm field. Really what you're doing here

Is using your lead arm

To be a passive conduit, to transfer energy from your trunk. The lead arm is not applying power by itself. It can't, there's very little muscle in order to be able to generate speed in the swing. So you're not trying to swing your lead arm fast. You're trying to let your lead arm be soft so that it can be propelled by your pivot to swing the club fast. And when you have something like this, it becomes very easy to feel this because if you try to release the club hard, the timing of it would feel very weird. It was still very uncoordinated off balance. So instead I'm going to make a nice long gradual swing. And then I can feel as I come down, I can feel the ball just whip through the hitting area, but I'm not trying to do it. And putting sir Isaac Newton in the driver's seat and letting that ball release passively on its own.

If you find yourself hitting it thin or hitting blocks, it's super common because you're trying to propel the, the speed with your arm instead of your body pivot. So take a look at the faults and fixes section where we talk about some of the common misses. Now, if you grab a G-Force club or any club with a flexible shaft, you can feel this and actually hit balls with it as well. So I'm going to take my club. You can see, I'm just kind of making a really smooth mellow swing. And there's just a little burst of speed right at the bottom, rather than me trying to force it. And so this feels as a very passive, effortless golf swing. So if you want that kind of feeling in your swing, then lead arm is the way to go for you. One thing I'll caution you about is check your grips.

If you see a wear spot underneath your thumb, where the pad of your thumb sits, it means you're trying to power the swing with your thumb. You're trying to force the release instead of letting the release happen. So make sure you take the last three fingers, your club. You can even take your thumb forefinger off the club and make swings. So you can feel that passive release feeling. Now let's talk about what it feels like with the trail arm, with the trail arm. We have a totally different paradigm in our swing, even though they can look very similar, the way they're going to feel is radically different. And here's why in your lead arm dominant swing, you're really trying to create a wide swing arc. So there's lots of time for the club to accelerate. And you're taking advantage of physics, the law, the wider, your swing arc, the bigger the radius of the swing, the more free speed you're getting. That's why your driver is always going to be swung much faster than your wedge. It's just a longer shaft, which leads to a wider radius. You're trying to create that same feeling with your lead arm, with a trail arm. It's the opposite. We actually have three levers in our trail arm. I'm elevating my shoulder in the back swing. I'm bending my arm at my elbow and my backswing and I'm setting

My wrist and my back swing. These can all be actively used to

Help propel the club and a very short period of time. So as you saw on the left versus right video trail arm, swingers tend to have a much shorter, more compact swing. Think John rom versus Ernie ELs, very big difference, both produce phenomenal results. They can get the same distance, the same power, but one is going to look a lot more aggressive than the other. And you can certainly see that in Ernie ELs classical smooth finish. And then you look at John rom and it's a very short, aggressive swing, both work, but the way that you're going to do them is radically different. So apart from these three levers that we have in this trail arm, we also have that clockwise rotation or the pressure or the, the Axiom movement as you're feeling this clockwise rotation. And I put the flail in my hand. Now I've got all of these levers and what I'm trying to feel now is as I rotate my wrist around, you can imagine if I was slinging a straight a rock on the end of a string, I would have that same feeling of how I would sling that rock into the ball.

That's very similar to how you're going to feel when you're trail arm dominant. So now I can make a very short, compact swing cause I have all of these levers in this rotation that I can use to swing the club through. So I don't have to make a real long back swing. I can make a very compact swing and get the same amount of speed, but just more physical exertion, both work, both produce the same results at the end of the day. The only thing that matters is finding which works best for you. The best way to do that is to go out and play with it. Spend a week or two swinging lead arm. Only get that long, nice, smooth syrupy Smith, feeling to your swing, and then spend a week saying, you know what? I'm going to try going a little bit shorter, more compact, a little bit of rotation.

I'm going to sling that club and impact both again, can produce the same results, go out and feel what feels best to you. You will undoubtedly feel that one feels a little bit easier than the other, but you may just not know all the pieces to make it work. Or you may just still be uncertain after spending a couple of weeks with it. If that's the case, get a swinger view because our coaches are trained to recognize movement patterns that tend to lead to making one easier and faster to learn than the other. And at the end of the day, that's what it's all about. How do we get you hitting the ball your best, the fastest way humanly possible and make it feel comfortable and natural for you. So take some time, try right arm only try lead arm only and see which works best. And if you're not sure, let us help you out.