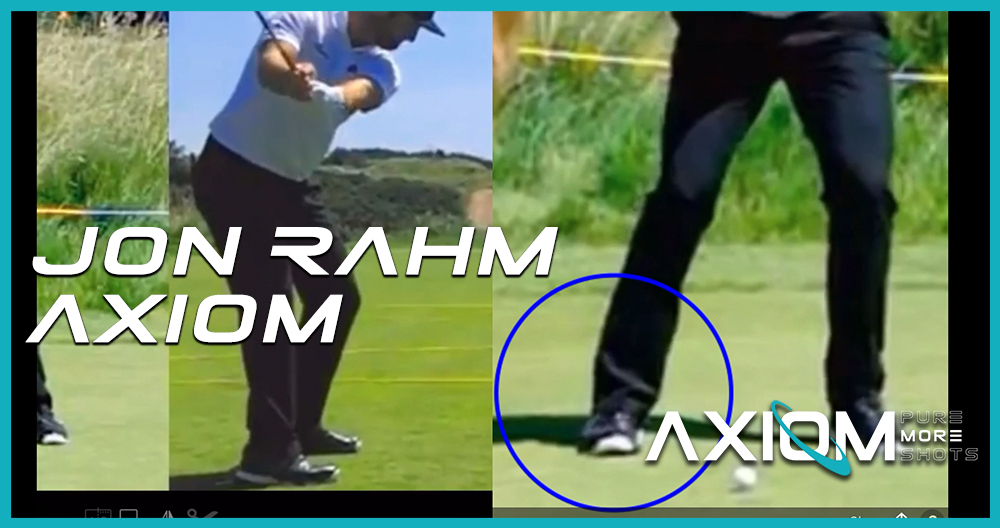 The swing of John Rahm. John is a phenomenal boss striker. He's obviously one of the best golfers in the world right now. And what's great about John is that you can see very clearly the principles that I've taught you in this video, very, very well in his golf swing. So let's first look at hand path. Now at first, when we start doing this and you're doing your air guitar, you're your best Eddie van Halen impression. And you're making that big strumming motion. It's a big exaggeration to get the clockwise feeling initiated, but then of course it has to be much smaller. It doesn't have to be, of course, as Matthew Wolf has proven, but in general, most golfers will feel more comfortable making a little bit smaller move. And so John Rahm you can see this hand path, this clockwise motion very clearly. And even though it's a little bit more obvious than other pros, it's still relatively subtle. So I've drawn a line here on the left, the blue line

That more or less

All the way up there

Up through the center of his hand, all the way up to the top of his swing. So it's a pretty good representation from a, you know, down the line 2d perspective of where his hands are now as he starts down,

First. You'll notice that the shaft changes angles. It's shallowing out now. How would

You do that? Clockwise rotation either

The lead arm or right arm, of course we're focusing on, right? Cause it's much easier to learn the overall movement, but either one can create the same effect to get the club shaft to shallow. The important thing is it's clockwise. As he

Continues down, watch what happens to his hands.

Notice that the center of his right hand is now well behind that line. And he's actually already begin to rotate a lot. If we look at him from face on, at the same point in the swing, you'll notice that as he starts down, he begins to a lot of rotation. Watch how much his left shoulder moves out from under his chin. So he's turned a lot, which would make his hands, want to look like they're moving out toward

The ball. And yet he still has a very

Obvious shallowing of those hands through that clockwise rotation of the right arm, the right shoulder, the right wrist and the club. And that's what brings the club down right through his forum on plane. And now you can see, we go back over here and we move him to roughly the same spot in the back swing. There's a pretty significant difference when his hands are at about the same height, same position

To where he is in the downswing.

You have to do to get the club

To shallow out like this, come down on plane and get into this nice little concentric circle path

Is clockwise rotation. If you do that, the club

Will shallow out. Now, if he didn't turn at all and he just did this motion that he's actually doing with his arms, you would see his hands going way back. Let me grab a pencil. His hands would be way back over here. If there was no rotation, that's how much of a clockwise circling motion that John has in his golf swing. So it's very easy to see. So I hope that helps illustrate

That point. Now let's look at his actual

Feet movement that we've focused on so much. So

We're just going to focus in on his feet. So we're going to zoom in here and in this video, it's very, very easy to see this motion. So first thing you're going to notice, look at the right foot again. So I'll draw a circle here, draw your attention to it.

Toe of a shoe, the white part at the front there is lifting. He's obviously on the outside of his foot, although not severely. So like many amateurs

There's would be much, much more severe than that. And you don't want to roll that far to the outside. Remember, we're just thinking about shifting pressure around the perimeter of the foot, which is very easy

To see in John's case because he's, his shoe is actually

Lifting. You can see it lifting and flexing and torquing there. And then as he starts down, obviously he's back on the heel we know is that we're back on the heel. That hand is shallow, and we're going to quickly move back to the insight into the toe,

Which is very easy to see there.

So pretty clear to see how he

Moves his body, that the actual movement, the underlying movement patterns that you can't see, but you have to deduce. What's actually happening through the clockwise movement that we've talked about with the Axiom. This is very easy to see in John's swing. If we go up the chain, you'll note the knee

A little tiny move. Not a lot. Now he's shifted

Back past seven, eight. O'clock he's getting off the merry-go-round posting up same thing with the right hip. If we go up another step, you'll see. Now that hip is beginning to rotate around, back toward the target. He's rotating clockwise with that hip. Now it's back past 6, 7, 8, o'clock he's getting off the merry-go-round and posting up. So another really good example. And if you look at John's left foot, you'll note quite a bit of the same things that we have talked about when you're doing the drill. But one thing that some tools or players do is they actually kind of mix these two together. I don't want to complicate things. I want to make it really simple. If you just focus on the right foot you're golden, but you can see that John's lead leg is moving in a counter-clockwise fashion. So as you can see these motions together, get him to a cleared hip posted position, but you really just need to focus on the right and get posted up on the left.

And that will get you into a great spot, cleared up, posted up at the impact. You have tons of room for your arms and hands to swing the club down with a great deal of speed. And if you look him from down the line, just one other point as you shallowing out, notice how close his elbow and hands are to his body at this point, compared to even during the takeaway or there's nice big gap, you can tell he's got some width there, but as he begins to come down now he's got his hands in those tighter circles. And that's where many of you felt that big boost to speed with that right hand when you're doing the right hand only drill, and you felt the club just whipped through the heavy hitting air, even though you felt like you were swinging slow. This is part of the secret to why the pros look like they're not working very hard and you can see that illustrated very well in Jon's swing.

Get Your Free Membership to Finish Watching "AXIOM in Jon Rahm" Right Now!

Get Your Free Membership to Finish Watching "AXIOM in Jon Rahm" Right Now!