Have you ever wondered how the pros use their legs for power in the golf swing? This video explains it in clear detail to help you stop losing your posture and start hitting powerful golf shots. 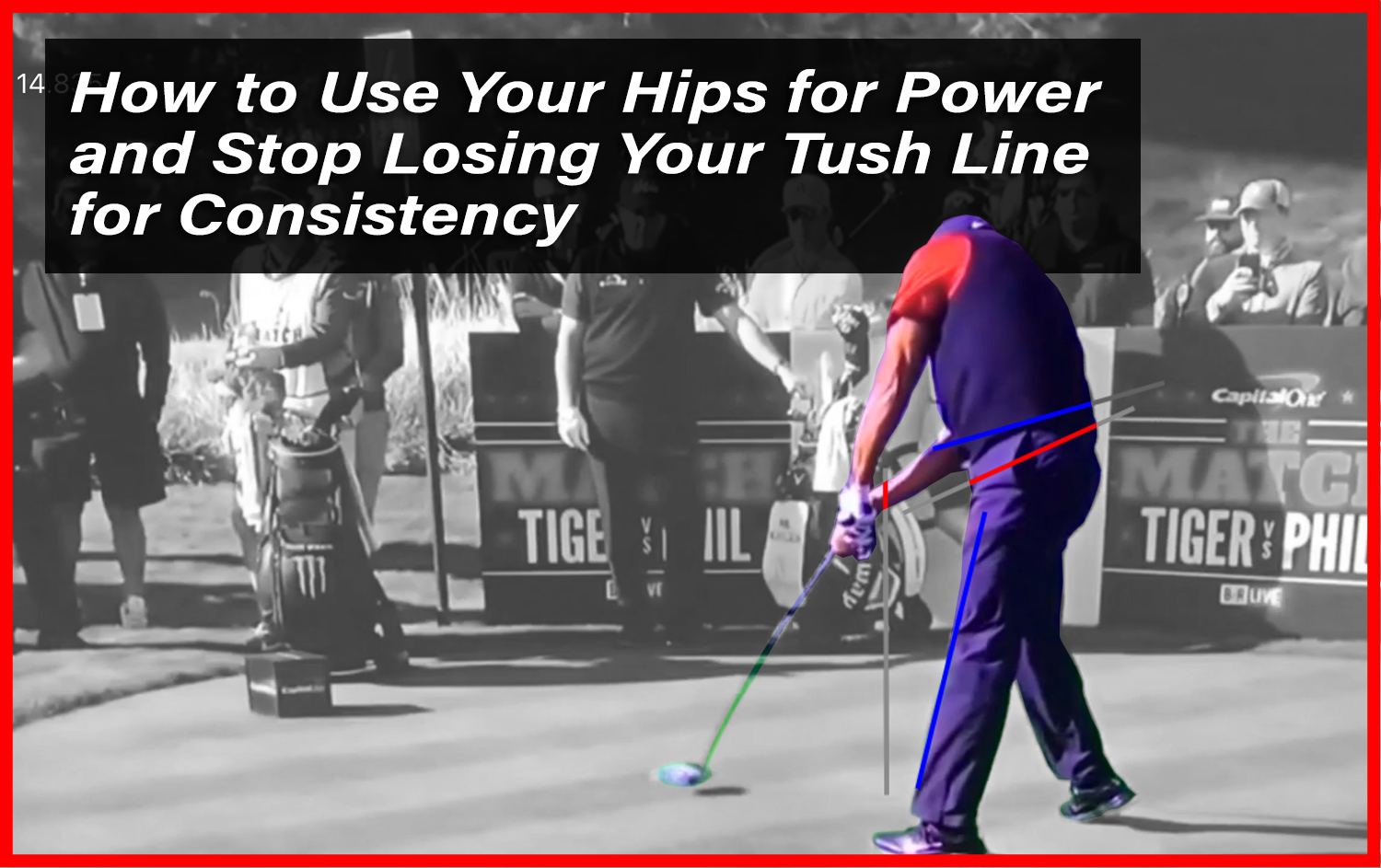 All right. Let's take a look at this in real time using tiger and Rory. So I'm going to draw a couple

Lines. One on the left tip and one on the top of the belt. Now these are two

Important things because they help you understand the forces that the top golfers on the planet are using to create effortless club head speed. And as I've talked about for years, it's using the ground.

You hit the ball with your legs. And from this angle, it's such a great way to be able to see

And down the line where it's a very flat two dimensional look, this

Helps tie these pieces together. So watch as tiger goes down, you're going to see his BeltLine drops significantly.

Now, what is D why is he doing this? Well, think about it.

As you understand where you're trying to

If tiger is going to push

Up and back, which is very clear to see there, that which we'll talk about in just a second,

That in order to get that club to move really fast, using

The big muscles in his body, his hips most

Move back and up the opposite

Direction the club's going. So in this case, you can see where Tiger's hip was during the transition

Is BeltLine is way down here and now notice how much it moves up. So why would you move down first?

Well, obviously, if you're going to really load those legs, if you were going to jump up off the ground, which tigers foot literally leaves the ground here, as he pushes so hard

Off that left side, that you would want

To go down first, if you're going to jump as high as you could, you wouldn't just stand there, statically. You would quickly go down and then

You would be able to stretch the muscles of the muscle fibers upon a correct connect, excuse me, contract very quickly.

And this is the stretch shortening cycle. And this is what allows you to create effortless speed. So you want to take advantage of this in your swing and use your legs to hit the ball. But from this angle, what's really important that I really want you to see

Is how much tiger and Roy's hips, both move back.

You can see that at this point, this swing Tiger's leg has moved significantly back from where it was, where it started. So if we wipe

This out, here's where his leg is now and look where it was during the transition. The only way you're going to do that is to push your foot into the ground. This direction.

He's moving his foot diagonally. You're pushing into the ground, diagonally

Away from the ball and up in order to move the hip, to move the club down to the ball, using his legs.

And you'll notice that Rory does the same thing, but there'll be a subtle difference in that notice the Tiger's left leg has completely disappeared here. I

Where's Rory, you can still see a little bit of it. And as a result, he looks like he is lost

The spine angle, much more so than tiger from this angle. This is simply a matter that his left hip didn't move back. As far as tigers do,

They're doing the exact same thing. Just one more so than the other. So long story short, when you're working on understanding how to use your legs and the video I posted on the site many, many years ago, how you hit the ball with your legs. This is a great illustration, a great angle to see this happening from that. You're truly pushing into the ground away from the ball. And that is what you use to move. Move the club back toward the ball. You'll notice tigers, head drop here, which has been criticized for many years. This is the most powerful

Move that he has in his golf swing. He's going down to load that leg so that he can push harder to move his hip away from the ball. And that is the key to power in the modern golf. Now

Let's take a look at this from the opposite view before we are looking at it, quartering from behind. Now, we're gonna look at it from up the line and you'll see the exact same thing, but it's so easy to see from this perspective, how aggressively Tiger's moving his hip away from the ball. And so you'll notice right here, his left leg is as close as the balls it's going to get. And now it's going to begin to move away from the ball aggressively

As he's pushing his hip up. And we

Can see this again, from what I was talking about just a moment ago, how much Tiger's hip is going to mean,

Move up and away from the ball and this

Direction and this Oop, this is direction that you need to start to feel in order to start maintaining your posture, to maintain your tush line. This movement is coming from the left

Leg, pushing the hip back and away from the ball. All right, now let's look

At one of my favorite swings out there right now, Kyle Berkshire. He is the longest hitter on the planet, and you're going to see the exact same things that we saw and tiger and Rory swing just to the nth degree and beyond he's going to do the exact same thing, but watch as he begins his transition, how hard he plants into that left foot really smashes down onto it. And then he pushes so hard that his foot leaves the ground and he's moving that left hip up and back as he posts into it, that he actually leaves the ground and moves his foot back several inches, which you can see from this view, which is really, really cool. You'll see how hard he pushes into the ground at impact. He's turning his hips so quickly and posting up so aggressively that his foot leaves ground and moves back. This is what you're trying to feel, but of course, certainly not to the same enth degree that we see used in Kyle swing. This is really, really aggressive, but the same feeling, the same most motions, the same movements are what you have to feel in order to use your hips correctly for power in the golf swing. Now let's take a look at an even more extreme example of this motion being used to hit the ball unbelievably long distances.

All right, so this is Justin James, I think pound

For pound, the longest hitter on the planet right now between he and Kyle and both of them do the same things just in slightly different ways, but create the same effect of trying to create space by moving their hips away from the ball, pushing off the ground, using that left side. So as you, as he starts down this, one's probably going to blow your mind. If you've never seen his swing before, watch how hard he pushes his body away

From the target line, right? Most

Amateurs do the exact opposite. Most every single amateur on the planet loses their posture, loses the tush line because they move from the right arm and right side

To move their body into the ball. And yeah, long

Hitters, powerful ball strikers, all move their hips away. That's how you're creating rotational force and vertical ground force together to create the most amount of power out of the big muscles in the swings of the arms and hands don't have to work so hard. And from this view, this is really, really cool. He actually launches off the force plaid

The using a body track there, he pushes into the

Ground smashes that left foot into the ground. So hard creates a tremendous amount of vertical forces. The ground pushes against him all done with this left leg and then watch how hard he pushes off that left foot. He literally leaves the forest pad and gets completely away from it. And that's creating tremendous width for his arms to whip through the hitting area as he's using his legs to push his hips

Away from the ball away from the target line. Because again, you should always be moving your body in the opposite direction. You want the club to.

Get Your Free Membership to Finish Watching "The Post Up Move - How to Use Lead Leg for Power and Maintain Posture" Right Now!

Get Your Free Membership to Finish Watching "The Post Up Move - How to Use Lead Leg for Power and Maintain Posture" Right Now!