In this video, I’ll show you how to generate more club head speed like Adam Scott and Rory McIlroy. You’ll find out why balancing leverage, width, and rotation are crucial for consistent distance. Also, I’ll show you a compensation that McIlroy makes that Scott doesn’t need. Check out this video now to generate more club head speed and blast your drives! 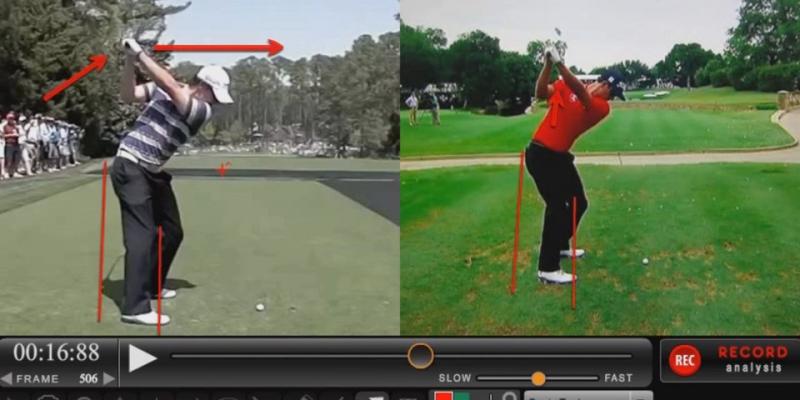 This week, Adam Scott, the new number one player in the world gets a big victory on the PGA tour and also the number six player in the world Rory McIlroy gets a win on the European Tour. I'm going to show you exactly how leverage, width, and rotation build maximum club head speed and maximum efficiency in the hitting area. Let's go ahead and get started.

All right, so the new number one player in the world, Adam Scott, gets a win on the PGA tour and Rory McIlroy gets a win on the European tour. Congratulations to both of these guys, they both have fantastic golf swings and they both are known for making a lot of club head speed. This week I'm going to show you a couple of distinct differences that they have in two of the three areas that are attributes to club head speed. Before we get started, I want you guys to understand that club head speed is attributed to width, rotation, leverage. We want to really try to find a really true balance between those three items in order to maximize the efficiency through the hitting area.

Let's go ahead and get started. I'm going to show you the two areas, and that way you guys can understand, when you're evaluating your golf swing, where you need to add and subtract from. I'm going to draw what we call the right knee line and I'm also going to draw what we call the tush line on both players. If you haven't seen the tush line video, or losing the tush line, it's going to be in the advanced down swing section. That's a good video, guys, for you to check out to learn how to keep the hips back and be able to self-diagnose with yourself if you're having any posture problems in the hitting area. I'm going to go ahead and work Rory up to the top part of his golf swing so you can see the differences between the two golf swings. Now, Rory averages 124 miles an hour with his driver, where Adam is averaging right around 121 miles an hour, so you can see that there's only three miles an hour of speed difference, which is not a drastic amount. Both are known, like I said, as longer players up there in tour.

This is one of those moves, as a recovery move, that's really overdone on the website. You can see here, as I start to work Rory down into the hitting area, you can see that his knees have really pushed through this original knee line. This is what we would call a squat move, and it's one of those things, I like I said, it's really overdone. He's using the ground for leverage, yes, which is great, but he's having to do that because his hands and arms are a little bit deep. With Adams hands and arms, because he's able to leverage a little bit more of a vertical arch to his golf swing, he's going to be able to build a little bit more speed in the downward move without having to leverage the ground as much.

All right, so you can see, as I start to work him down here in the hitting area, he's not having to make any sort of drastic move and he's still able to leverage the ground. That's one of the big misconceptions here is that he's still got knee flex in the left leg, and he's going to be able to drive that left heel into the ground and then also use those left obliques to pull the left hip away from the target, which in turn, is going to straighten the left leg and pulling myself out of the ground. There's a good video on that in the advanced down swing section called "The straight left-legged impact" that'll give you some kinesthetic awareness about what muscle groups you need to use in order to pull that left leg to a straight position.

But you can see here that Rory's really busted through that line. He's really having to leverage the ground because his hands and arms weren't as vertical, but as I get him into the hitting area, he's really pulled those legs or pulled that left leg to a straight position, his right knee's not through that line. You can see Adam, into the hitting area, same thing, he's never busted through that line. One of the things I want you guys to know, as far as a comparison here is that you can look at the right foot, they've rolled to the right, inside part of that right foot, never allowed that heel to come up off the ground, which would in turn make the hips go forward. You can see here that the hips have come very [inaudible 00:04:22] forward I guess is the best way for me to put it here. If you've noticed that your tush has come off this line quite a bit, you're really going to be running into some early extension, you run into a lot of consistency issues. You need to use that right foot as kind of a braking mechanism to the hips and also be able to keep the hips back.

So I want you to check out the straight left-legged impact video, that's in the advanced down swing section. Check out the losing the tush line video, that's also in that same section. And then, also check out the roll of the right foot. That's going to teach you guys how to use the lower body properly. Make sure that your weight shifts loading to the right and then shifting to the left or down before you try to add any sort of magnitudes or squat because if you're trying to add squat before you have a lot of the fundamentals, now you're just trying to build a lot of timing into the move.