Congrats to Rory Mcilroy on his 7 shot blowout victory at the 2015 Wells Fargo Championships. It's pretty incredible to think that this modest-sized player averaged more than 320 yards off the tee this past weekend. If you've ever wondered how McIlroy, Mickelson, or other bombers hit their clubs such amazing distances, this new analysis video is just for you. You'll see how to make some easy setup adjustments that will get you smashing your driver further than ever. 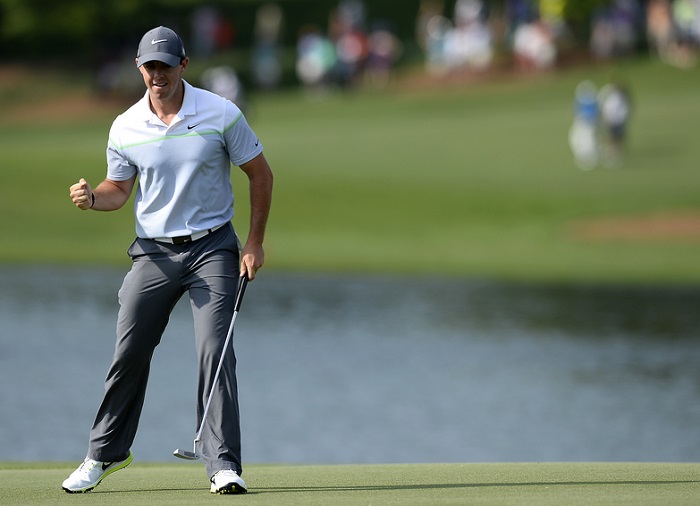 The world number one player is back at it again. Rory McIlroy gets a seven-shot victory at this week’s Wells Fargo Championship, so congratulations to Rory. We're going to be going through some golf setup adjustments between the driver and iron play. I'm going to show you some of the distinct differences. I'm also going to show you a really cool close up of Rory's hips, and how he's able to stall them and actually make them go backwards in the hitting area. Let's go ahead and get started.

All right, guys. As I said in the opener, we are going to be focusing in on a couple of the setup adjustments that we would make from a stock iron shot format over to a driver swing. I’m going to show you some of those things that from an addressed position all the way down into the impact zone, some of the differences that these positions will cause. Let’s go ahead and take a look here. Over on the left-hand, obviously, we’ve got a driver swing. You’re going to see a much wider base here.

Okay, much wider base. You’re also going to see a little change in ball position. I’m going to draw lines out from the center of the ankles on both sides. You’re going to see that he is roughly 2 inches outside of neutral drawing alignment on both sides. Ball position is pretty much perfect as far as where the bottom of the swing arc is going to be. You can see it’s off of his left ear, and he’s made a slight adjustment with the driver swing here. You can see the ball position’s just slight amount forward of where he would be playing an iron swing.

Now, this is contrary to what you’ve probably heard. I know a lot of golf instruction in the past saying always off the left heel. He’s just made a small adjustment here. He just moved it maybe a ball, ball and a half forward. Again, modern-day equipment’s set up for a very high launch conditions with very low spin. With these setup changes, I want you to pay really close attention to one critical area of the golf swing here. All right, and then we are going to get to the fun stuff. I’m going to show you guys his hips -- how they work. All right, so check out axis tilt.

This is going to be one of the big differences with going to a wider base here. Let’s take a look from an iron swing perspective. Up to the top maintains axis tilt beautifully. Then gets fully seated into the lead side. Then at impact, you’re going to see a very stacked up left side here. See how all of the shoulder, the hip, the knee, and the ankle are right on top of each other? Then axis tilt is now just barely outside of his lead knee. Okay, so you can see the spine just facing just outside of his lead knee.

Now, because he’s got such a long ways to shift his weight, and we are setting up to create more of an ascending blow on the golf ball, you’re going to see a lot more axis tilt here down in the hitting area. Up to the top you’re going to see him shift and load up, and there’s a big, gigantic push to get everything back over to the lead side. Lot of external rotation from his lead leg as well. Then this is where he starts to unload it, and now you can see that this impact position doesn’t have his lead shoulder stacked up like it would in the hitting area. Now, take a look at the big difference here. You’re going to see a lot more secondary access tilt.

Now, the one thing I want you to know is that if you’re looking to create more launch or higher driver ball flight, it’s easier to do or to get more secondary access tilt by going to a wider base, but that doesn’t mean I want you to get away from shifting your weight completely over to the lead side. A lot of the tendency is to create this secondary access tilt is that we want to hang back, and that can create the club coming in very, very shallow. It can make the club bounce off the ground. I know we’ve all done that in the past. You want to always work on transferring your weight.

All right, so before I get into showing you guys this awesome look at his hips, couple of videos I want you guys to check out is this driver set up adjustments video. These videos are going to be to the right-hand side of the video player. There’s a tab that says recommended videos. Just go ahead and click on that. You’ll see all the videos populate. There’s a hip spinners belt buckle drill that’s a really good video for those players that keep the hips really spinning hard to the hitting area or even from the top of the swing down.

Very good drill in there. I think that’s a drill that’s often overlooked by a lot of the players, but make sure that you are a hip spinner before you address that because you still want to be able to use those for a lot of power and a lot of speed in your downward move. Then there’s a video that’s actually called Squeeze the Cheeks. It kind of sounds funny, but it is based around the glutes, and how to use your glutes down in the impact zone for a lot of stability and a lot of power.

All right, guys, so let’s take a look at this hip action, and you’re going to be pretty blown away with how his hips work. Okay, guys. As I said, I was going to show you a pretty unique view of Rory’s hips here. I know there’s a lot of talk about how he uses his lower body in the golf swing, and I know that you probably have heard a lot of people talk about his hips actually moving backwards. This camera angle’s actually able to capture that very well, and I’m going to show you that right here pretty quick.

He loads up to the top. We are going to pay close attention to his belt buckle here in a downward move. You’re going to see it start to rotate hard. Okay, so it’s rotating. It drops down as he squats. That’s going to help leverage the ground. Now it’s going to start to move up as he’s straightening the lead leg. Then as the club is starting to go down and through the release he’s extending the radius. Extending arc there. That’s, in turn, going to speed the club up.

This is where they saw, and now you’re going to see them move backward. I’m going to mark the hips here so you can see it. I’m going to mark this belt buckle. As his hands are passing in front of him here through full extension, you’re going to notice that his hips move back. See that move there? That’s pretty crazy. That is definitely lower body stability, and definitely stalling the hips to a maximum. I know a lot of you guys have asked what we mean by his hips actually going the other way. Now, you can see it here.

His hips work back in the other direction as he’s at full extension, and that’s how he’s able to generate a lot of clubhead speed. He’s using the kinetic change really, really well in his favor. All right, guys. Again, so just check out driver set up adjustments. There’s also at the bottom your driver’s series that’s in the video section. Check those out. Lots of great information there. Lots of great data that’s going to help you boost up that clubhead speed, and be on your way to playing some awesome golf. Let’s get out there and make it a great day.


JOIN OUR 400,879 MEMBERS AND GET INSTANT FREE ACCESS TO DOZENS OF VIDEOS!