"Everything's laid out on the website. It's pretty much there in front of you; you've just got to follow it."
-Neil Murphy, Premium Member

"Sign up for the website...This is going to be one of the best things you've ever done."
-Mark Staples, Premium Member

"If you make a commitment to the program and you go through the program the way it's laid out, you will get better."
-Greg McNeill, Premium Member

See for yourself the dramatic improvements our students have made

Is This 79-Year-Old the Next Tiger Woods?

After working with the golfer for 30 minutes teaching him HOW to move, not just where to put the club, there's a dramatic improvement in his takeaway. 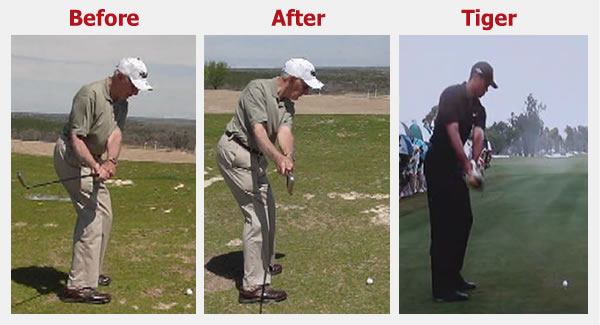 Halfway back, there's no comparison. The image on the right is as good as Tiger Woods and absurdly better than where he started just 30 minutes before! 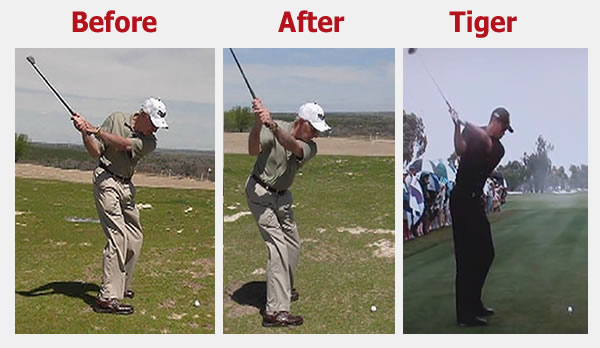 When he gets to the top of his swing, there is no comparison. Put this guy on the super senior tour! 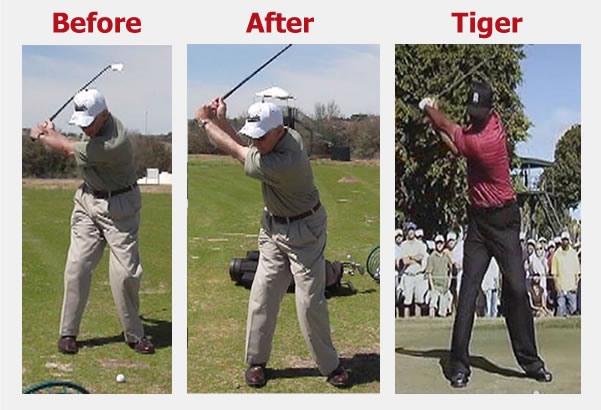 All of this can happen in an hour long lesson with me because I teach my students how to create new movement patterns the way the brain ACTUALLY LEARNS new movement patterns. Learn more in my Level 1 RST Certified Instructors Manual and you, too, can improve your golf swing like this.

Giant Increase in Lag in Just 10 Minutes for Aspiring Pro!

by Chuck Quinton, Master Rotary Swing Tour Instructor
For comparison sake, I pulled in an image of Hank Kuehne at a similar point in the downswing, though not exact. You can see just how much lag my student has added in 10 minutes over one of the longest hitters ever on the PGA Tour!
Click here to read this student's full story.

by Chuck Quinton, Master Rotary Swing Tour Instructor
Here's a typical example of a student with a poor top of the swing position that is causing all sorts of trouble with his ball striking. In the picture on the left, his arms are deep and buried behind his chest, hips over rotated, clubface open, etc. In the picture on the right, the swing is much improved by the following day.
Click here to read this student's full story.

by Chuck Quinton, Master Rotary Swing Tour Instructor
My student Mark was digging trenches for divots and hitting many shots fat. After working on the Right Arm Only Downswing Drill for about 10 minutes, we were able to produce the results you see below.

The payoff? Mark felt he was putting in less than half the effort for the same or more distance, had more control, a better contact and took a massive load off his body.

He was pretty grateful and spoke about his lesson afterwards in this short clip
Click here to read this student's full story.

Golfer in His Late 70s Learns a Better Swing!

by Chuck Quinton, Master Rotary Swing Tour Instructor
At the end of the takeaway, we moved his club about three feet; that's pretty dramatic in one hour.
Here's the difference at the top of the backswing. If you ever think you aren't flexible enough or have played for too long to learn a new swing, just remember this student! No more excuses!
Click here to see this student's full story. (Video available with Free Membership.)

Indian PGA Tour Pro Compresses the Ball Like Never Before!

by Chuck Quinton, Master Rotary Swing Tour Instructor
Here's Raj, a pro golfer on the Indian PGA Tour who came over from India to work with me for two days. Raj had a very overactive right side in the downswing, both the right hip and the right arm, leading to big blocks and thin hooks with his very stuck arm position at impact.

Working on stabilizing his hips (for him feeling like they stay shut during the downswing and bracing using the left glute while pulling with the left arm) we got him into much better positions in about an hour. Still have work to do but his ball flight, but contact and compression improved dramatically.
Click here to read this student's full story.

by Chuck Quinton, Master Rotary Swing Tour Instructor
BEFORE: Here are some results after our first week on fixing his stuck, flippy position at impact to produce a ball flight that is literally half as high as before and is now far more penetrating.

AFTER:As you can see, his impact position has changed dramatically in only one lesson using the drills on the site.

After our lesson, Ik-Joon was ecstatic about the improvements and had the following to say:

"I've worked with David and other top instructors for years and not a single one could ever tell me how to exactly get into the impact position you taught me in 5 minutes."
Click here to read this student's full story.

by Chuck Quinton, Master Rotary Swing Tour Instructor
His posture at address had him way out on the balls of his feet with a very rounded spine making it impossible for him to swing in balance and make decent contact. After 15 minutes of work, I think you'll be impressed by the change in his posture.

by Mike, Rotary Swing Tour Student
Well I have gone on and on about my lesson with Chuck and how awesome it went and that the key point was that I had ZERO shoulder turn (believe it the one on the right is at the top of my old backswing)...

So here it is; the before Chuck lesson [on the right] and after [left]. Remember this is just a quick swing in the back with no warm up. I am very excited with what I see here and can't wait for the next step.
Click here to read this student's full story.

by Instructor Al Consoli
BEFORE: On the left side is a trace of Kris's swing path. The red line represents his backswing, and the yellow line represents his downswing. It becomes quite clear Kris was over the top which resulted in many 'wiped' shots that would weakly balloon and fade.

On the right side, you can plainly see Kris's failure to shift that left hip which left him well short of Neutral Joint Alignment (NJA). Kris's weight is now trapped on his right side which results in the excessive axis tilt and his head backing way up as he comes into impact. He never covers the golf ball effectively, and fails to compress or flight the shot the way he desires. Due to his improper origin of movement, the more he would try to cover the ball, the more fat shots he would hit. 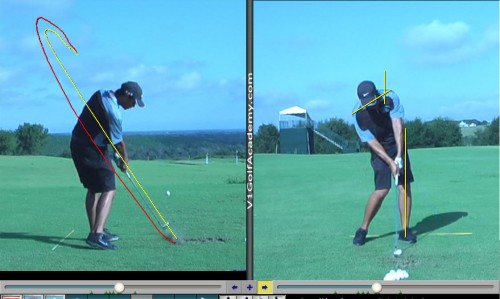 AFTER: Due to the backswing improvements, Kris takes the club on a much better plane, and is capable of keeping the club in front of his body. A proper weight shift, planting the left heel and pulling from the left oblique allows the club to shallow slightly and attack the ball from the inside (note the yellow downswing line is underneath the red backswing line).

On the right half of the picture, you can see Kris's head has not backed up nearly as much, and the axis tilt is improved. Kris's left hip has shifted toward the target before he unwinds the hips which allows him to get into NJA at impact. 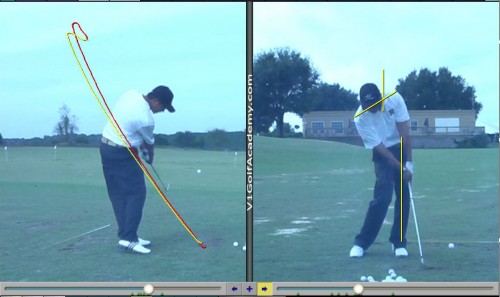 I want to mention at no time during this lesson did we talk about swing plane or what the club was doing; we focused solely on proper origin of movement in the downswing. The golf swing needs to be based on a pull-pull relationship in order to abide by the laws of physics of rotary motion. Kris serves as an excellent model of what can be achieved by focusing on how the human body is designed to work.
Click here to read this student's full story.