Early Extension in Golf | Maintain the Tush Line in the Downswing 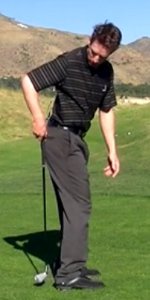 The tush line falls a couple inches behind the heel

Early extension in golf or "losing the tush line"  is a common problem for golfers of all levels.

It's talked about a lot on the forums as people discuss different aspects of the golf swing.

You can build a lot of good things into your swing, but when you look at it from down the line a lot of golfers start to stand up through the downswing and get this early extension.

Let's take a look at how early extension affects the golf swing.

As you come into impact, one of the things we look at is the "tush line" which, seen from down the line, is simply a vertical line drawn straight down from the rear.

We generally draw the line at address and, as you can see in the photo, it falls a couple inches behind the heel.

Where Did It Go?

As you come down into impact, early extension in golf looks like the first photo in the image below.

You start to stand up, your rear comes in, and you lose the line.

Maintaining the line looks like the second photo, where the tush line is basically the same as it was at address. That's what we're looking for.

Pushing off the right foot: Creates early extension in golf, and the club gets stuck (above). Correct form (below)

If you lose the tush line, the club tends to drop to the inside and get stuck.

You're more likely to hit blocks and pushes and snap hooks. It's also hard on your back and your hip.

Early extension shows that you're doing a couple of basic things in the golf swing incorrectly.

We have a drill to help you develop the correct movement.

It may be a little challenging at first, especially for right handers who are used to playing from the left side of the ball (the right-handed side) and are very right-side dominant.

Many right-side dominant golfers tend to push off the right foot and get that early extension in golf. That's where most of the movement comes from.

The second most common cause is rotation without weight shift - see the photo in the next section.

You get to the top of the swing and instead of shifting into the left side you stay where you are and just start rotating.

When you start to spin your body like that, without shifting your weight, you start out with all these great angles and then, as you turn, your body tries to get into a straight line.

Seen from down the line, your body ends up looking much straighter.

You've lost all those nice angles you had.

How Do You Get It Back?

As always, we have a drill to fix the problem. It's very simple, but a lot of people find it challenging at first.

Start out very slowly, hitting small, short little pitch shots until you start learning the sequencing, which is very different from what you're used to.

They don't understand the sequencing of the downswing, so they go to the top and then just push and unwind and spin everything as fast as they can.

They end up with this early extension and lose the tush line.

For this drill, you're going to go to the top of your swing, pause, and then sit into your left side.

It's an exaggerated move for the sake of the drill. You should feel like you're sitting down and really loading and engaging your left glute.

When you do that, you get your weight onto the left side where it belongs instead of just spinning around with your weight hanging back on your right foot, or maybe partially shifted but not far enough. 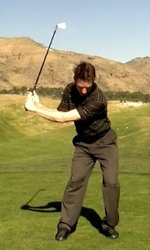 Sitting into the left side...Key to stopping early extension in golf

Once you sit into the left glute, you're stacked over the left side.

You have the power to start swinging the arms and everything down and release the club.

Note that your right leg is relatively passive at this point. You're not trying to push off of it.

Imagine that you're just going to leave the right leg there for now. It stays quiet.

You'll find that your knee flex will increase on both sides because you're really making a sitting motion as you do this.

Once you sit into that left side, you can release the club.

With the right leg passive, as you sit into the left side you finally engage the glutes, which provide stability and let you use the ground for leverage.

If you just stand there and spin, you're not getting anything out of the ground. You might as well be on an ice skating rink.

Once you squat into it and start to engage the big muscles, you can push off the ground and stabilize.

Now you can use the hips for speed and power. That's the key.

If you suffer from early extension in golf you may find this drill challenging at first because you're used to going to the top and just spinning.

Instead, you're going to go to the top, stop, and sit into the left side.

Some of you may get increased knee flex, and that's a good thing. Don't be afraid to let it increase a little bit.

The main thing is, don't feel like you're just spinning your hips. You're just sitting, not rotating at this point. 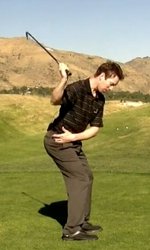 Try standing against a wall

You have some lateral movement, but you're not adding any rotation into it yet.

There will be some natural rotation, just from sitting and starting to come down, but don't try to add to it because that would keep you from getting stacked all the way over.

You should feel like you're still doing the Belt Buckle Drill - your belt buckle is still going to feel shut.

As you come down you're going to naturally get into a good, squared up, slightly open position with the hips at an angle of 30-40 degrees.

That's where you want to be at impact.

Learn to sit into the left side and you'll start to be able to maintain the tush line and end early extension in golf.

A simple additional exercise is to stand up against a wall as you go through the drill.

If your hips move away from the wall, you'll know you're starting to lose the tush line.

Learning to maintain the tush line and load correctly into the left side will start to build power and stability into your golf swing.

Get Your Free Membership to Watch "Sitting Into the Left Side" Right Now!