How to Release the Golf Club

Learning how to release the golf club in the golf swing is one of the most important aspects in the swing for efficient clubhead speed. Releasing the club not only helps you hit the ball further but it also helps square the club face through impact.

In this video, a very simple drill is provided to give you a powerful release and teach you how to time it so that maximum clubhead speed is reached at the right time. If you struggle with releasing the golf club early (casting the club) and losing lag, this video is a must watch for you. 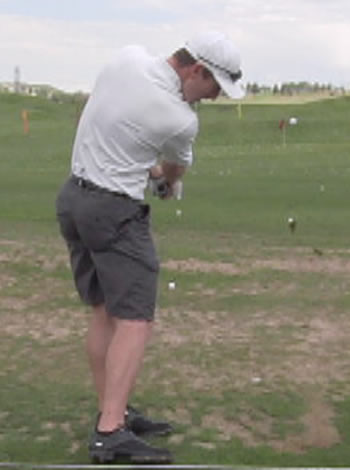 In a proper golf swing release, note how the golf club shaft is down my toe-line and the toe of the club is pointing up. Allowing the golf club to release like this is a trained skill that takes time to develop and the drills in this golf instruction video provide the learning pathway to an effortless release.

Once you master this drill, you will have much more club head speed with much less effort and be able to properly square the club face. If you struggle with slicing the ball, this will put an end to that in a hurry!

"...the whoooosh sound at the proper time is excellent positive feedback. Best drill I have ever seen [regarding] proper release acceleration thru the ball plus swinging the club in the air (not hitting the ground) is great for freeing you up to make an accelerated swing. Just wanted to let you know that this is a great drill!!!"
-Steven B. | Nov. 2011

In the swing above, from the summer of 2010, I was working very hard on teaching myself to more efficiently release the golf club. I have released the golf club with the body for my entire playing career and held off the actual release of the clubhead for so long that learning to allow the clubhead to release past my hands required some very unique feelings.

My body, arms and hands feel as if they are completely stopping through impact while I engage my glutes for stability to support them. I feel as if my hips aren't rotating at all (the Belt Buckle Drill in the Hip Spinners video) and the club is releasing past my hands.

Obviously, looking at the video of my swing, it is evident that these things are NOT happening in my swing, which is why it is so important to have a video camera and a trained set of eyes on your swing while you are making changes.

Because my body feels as if it's doing so much less now, it's hard to overcome the urge to try and "add" something to the swing. I don't feel like I'm doing ENOUGH!

But, that's really the whole point to efficiency. You SHOULDN'T feel as if you're doing much in a proper golf swing, but it takes time to build in and become more comfortable with the newer, more efficient movements.

The most important concept of the golf swing to understand when it comes to clubhead speed is that it needs to happen in only one place in the golf swing, and that's right here at impact. Any speed where most amateurs typically produce it, early in the swing, up high at the top of the backswing, is completely wasted effort. 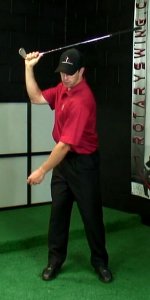 It's very hard for golfers to understand that. Oftentimes they feel like they've got to swing so fast and so hard and so early from the top of the backswing to try and produce speed that they don't realize how inefficient that is.

What we're going to do here is I'm going to give you a very simple drill that you can do every time you're on the golf course when you're working on your release. All you need is a golf club. You should have one of those with you anyway.

You're going to flip it upside down so that you've got the handle down. What this is going to do is take a lot of the weight out of your hands so you start learning how to release the golf club without needing a lot of muscular effort.

It teaches you how to produce speed. It's not power in the golf swing that you're looking for, muscular effort, it's speed. Notice, I'm not a very big guy, but I hit the ball a long ways purely because of technique and speed. I'm able to produce speed in the right places in my golf swing, and that's the key. 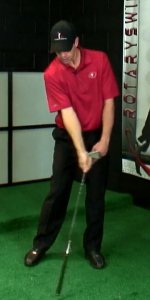 What we're going to do is stack a couple of things on here. One, we're going to try and get ourselves into that right position at the top of the swing, with just our right arm only. We know elevation, flexion, from our "5 Minutes to the Perfect Backswing" video. Now as we go to the top we can turn and just keep that left hand off of there.

What I want you to try and do is, at first, come down here and snap the club at impact. I want you to stop at impact each time. Try and produce some speed, but feel the right impact positions.

Once you can get into that and start to produce speed here, you're going to feel how that right wrist maintains a lag, and then you snap it at the bottom. If you're doing this from the top, and you're throwing the club here, you won't be able to get back to impact without the shaft passing your hands.

What you're doing is you're conserving, maintaining lag, and then snapping at the bottom. It's not "build speed as fast as I can." The sequence is sitting, bringing the arm in, then snapping the wrist as you come through impact. 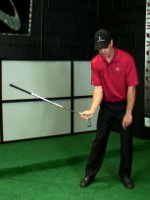 Notice how slow it looks like my body's moving. I'm not moving very fast with my body, but you can hear the club has a lot of speed at the right point. This is the only point that it matters.

If you can snap the club here with that Right Arm Drill - this is coupling the Throw the Ball Drill, the Right Arm Only Downswing Drill, our Backswing Drill, so we're starting to stack a lot of pieces on there that we've been working on - we can get a great deal of speed.

Having this club flipped upside down is critical, both for you to hear it, and hear that you get speed here - you don't want it out here and you don't want it here - now try and do the same thing with the club in the normal position. Here...same deal. 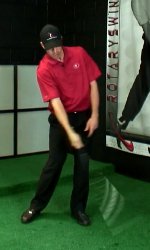 You should be able to hear it at top speed

We should be able to snap it and get around to a full follow through, and maintain lag all the way down here. We're pretty slow to here. We're gradually building speed until our hands get about right in front of our thigh, then we snap it and let the club release.

If you can do that with this drill, upside down, you'll start to be able to work on your release and get the release point at the right point in the golf swing so that you get a lot of speed without a lot of effort. That's the key.

You can tell that my body's not really moving too hard here, but because of good technique I get a lot of speed at the right point in the swing.

Work on this drill. You can do it between each shot. When you're working on your release, flip the club upside down and start snapping it, and you'll get a lot more speed with a lot less physical effort.