Weight Transfer in Golf and the Right Hip Line 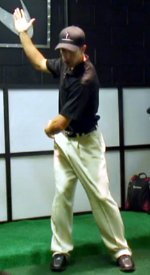 We're going to continue talking about weight transfer in golf and how it affects the hips and the position of the right hip line, particularly on the backswing.

When we're looking at swings on video and doing lessons online or in-person, we like to draw or imagine a line on the outside of the right hip. You want to see your right hip stay on that line as the club goes back and you transfer your weight. 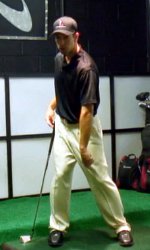 Hogan talked about this in his book. He described leaning an umbrella or a golf club up against his right leg and making sure that the angle of the umbrella doesn't change as he moves the golf club back and shifts his weight.

One of the most common problems we see is when golfers take the idea of staying centered in the golf swing to the wrong degree.

In the attempt to stay centered, they actually move off center and shift their weight to the front foot, which moves them away from that hip line.

If you try this yourself, you can see what happens. Imagine a line on the outside of your right hip. As you go back, concentrate staying completely centered. Don't let anything move, just rotate and watch that hip line.

As you rotate back and don't transfer your weight in golf, you'll see that the hip has clearly moved away from the line. Did you stay centered? Absolutely. You didn't move your head an inch; everything feels really locked in and centered, but in fact your weight has shifted forward or stayed the same. 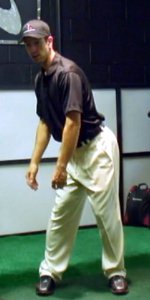 Working too hard to stay centered

The weight transfer happens very fast in the backswing. If you aren't aware of it and have never seen it on video, you may have no idea you're doing it.

You're actually putting your body in an extremely awkward and weak position, and missing out on the opportunity to use the right side of your body for power or storing energy.

When you work too hard to stay centered you end up shifting your hip, and then your torso moves the other way to compensate, as a counterbalance. Your hips move in one direction, your head in the other.

Weight Shift is the Key - But It's Not for Everyone

How do you stay on the line? The key is weight shift.

For whatever reason, many people don't think there's a weight shift in the Rotary Swing. Certainly we've said that staying on the left side is fine for golfers who don't practice a lot and are just trying to be able to hit the ball more consistently, without spending a lot of time working on their golf swing. That hasn't changed. That's still 100 percent true.

If you don't practice your swing that much, you just want to go out and play once a week with your buddies and you're not really that into working on changes, definitely just stay a little bit more on the left side - on the lead leg on your golf swing - and you'll be fine.

It's far more important that you're on the lead leg at impact than it is that you make a shift going back and through. If you make a great shift on the backswing but you're still hung up and on your back leg at impact, you're going to run into all sorts of other problems.

If you're not a serious golfer, you don't spend a whole lot of time playing and practicing, go ahead and err on the side of staying on that leading leg.

If you're a member of this golf instruction website, the above probably doesn't apply to you. You're probably interested in maximizing your swing and getting as much power out of it as possible. You're willing to take some time to work on it and get as good as you can. Here's how you can keep your right hip on that line.

The truth of the matter is that if you're serious about optimizing your golf swing, of course there's a weight shift.

You shift to the right to keep from moving off that line. If we do the weight transfer without the rotation, just to isolate it for a minute, you can see in the photo to the left that it's just a one- to two-inch shift to the right with your hips, not your head.

You're not swaying your whole body. You're just shifting your weight through your hips. Your head stays centered, even as you load into your right side. 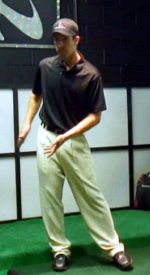 Don't load onto the outside of the leg

It doesn't matter what sport you look at. Any athlete getting ready to make a throwing, hitting or swinging motion is going to do the same thing. For a split second, they load into that right side, then they shift the load into the left for release.

In order to keep your hips from moving away from that line, you actually have to transfer your weight -by shifting your hips - to the right. That increases the weight on the right side.

By the time you get to the top of the golf swing, you're going to be about 80 percent loaded into the right. Some will go a little more, some a little less, but 80 percent is a good middle-of-the-road figure.

Make sure, when you're getting 80 percent loaded onto that right leg, that you're on the inside of the leg, not the outside. Your hips should never go out beyond that line.

Doesn't the Weight Transfer Take You Over the Line?

The hip is on the line

As you shift to the right, you'll notice that you will actually tend to move past that line. Let's break the move down into two pieces to see what's happening and how you'll compensate for it.

First, shift to the right; your hip will move past the line. Now, add the rotation. This puts your hip back on the line. When you combine the two parts - shift an inch to the right and rotate - your hip looks like it never moved.

It's an illusion; your hip actually moves 45 degrees. It has to, in order for you to look at your swing face-on and have your hip appear to stay on that line the whole time. Your hips shift to the right as you rotate, and that's what keeps them on the line.

You'll see that your hips are actually moving back behind you as you're shifting and rotating. You're loading up onto the right glute, and that's where you should feel all the pressure at this point.

If you're feeling it in your knees or quads - the front of your thighs - that means you're getting the weight on the balls of your feet. 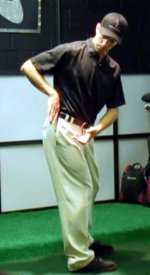 The hip is on the line

Move back into your ankles, and then farther back onto your heel as you get to the top of the swing, settling all the weight into your right glute. Setting into this side maintains that right hip line.

You need to realize that your hips are not just pivoting throughout the swing. A lot of golfers simply turn their hips. They don't even realize they're doing it.

In fact, the two parts of the hip movement - the shift and the rotation - are creating internal rotation of the right leg in the hip socket.

Look at the golfer's right hip in the photo below. Notice that the rotation has creased his pants at the hip as the leg rotates within in the hip socket. If you just turn your hips, that crease won't form because there's no torque.

Look For the Crease 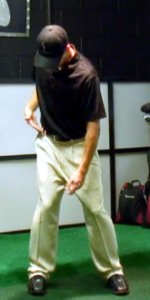 Look for the crease

You can use that crease as a checkpoint. It shows that you didn't just take your hips and pivot them without torque, and without loading into that right side.

Remember this when you're out on the course. Load into the right side, make sure you've got the internal hip rotation, and boom. You'll see a nice crease across the right hip, showing that you're fully loaded up on that right side.

The same thing will actually happen on the left side, too. It will be a little different because, as you're rotating through, your hips are going to come all the way around to 90 degrees, while in the backswing it's just 45 degrees of hip rotation at the most.

Again, you're going to transfer your weight to the right in golf while rotating, look for that internal hip rotation, drive everything down into the right ankle and then the right heel.