Left Arm in the Golf Swing | Let Your Right Arm, Not the Left Do it All in the Backswing 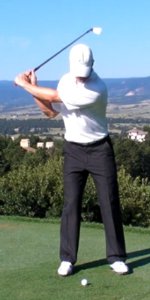 Pushing with the left arm in the golf swing

Pushing with the left arm in the golf swing is one of the most common problems we see when teaching people rotation in the golf.

In other words, many golfers take the club back primarily by pushing with their left arm across the center line - the sternum - during the the golf backswing.

When you push from the left, by the time the left arm gets across the chest, it feels fully loaded.

It's not going to go any farther, so you feel like your golf swing is complete.

The photo at right shows what that looks like. There's obviously no rotation in this backswing.

The swing feels pretty well loaded, but there's actually no shoulder turn at all.

If you get into this position, you feel wound up and ready to hit the ball hard, but in fact the big muscles won't be used at all in this swing.

You need to learn to rotate, pulling your right shoulder back instead of pushing your left arm across. 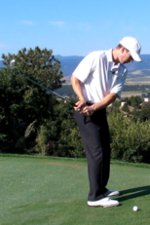 Looked at from down the line, if you take your left arm and push it across your body, where does the club end up?

The photo to the left shows a common position; the club is very deep and back inside.

The right arm is folded and the golfer is up out of the box.

We know that for every two degrees your right elbow moves behind neutral, your shoulder blade moves up one degree.

When that starts to happen, you're out of the box - disconnected from your right lat - and left arm push is a very common culprit in that situation.

Now the club is buried. Amateurs generally try to correct for this in one of two ways.

They either lift up and come over the top, or they slide and come way from the inside. Neither one is very desirable, obviously.

So What Should You Do?

Instead, you need to understand this about the left arm in the golf swing: 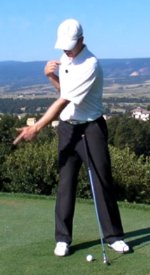 The role of the left arm in the backswing is...pretty much nothing. Your left arm stays right in front of your chest.

You'll pull your right shoulder blade back, and the left arm will elevate a little bit. That's it.

Imagine that both of your hands are right in front of your chest, on the center line. They're connected by the club.

If you add a little bit of rotation, that will allow the left arm to swing across your chest to put the club on plane at the top.

It's not the left arm that's doing the work. The right arm folding is what puts the left arm where we want it to be.

The left arm may do a little bit, but most people aren't going to feel that it's playing any active role whatsoever. It's the right side that takes the club back and puts it in position.

Let Your Right Arm Do It All 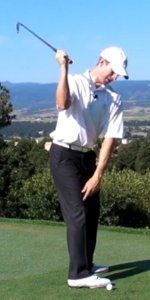 Go ahead and try it. Hold the club in your right arm only. Fold your arm, get it into neutral joint alignment, rotate it a little bit and turn to the top.

As you can see in the photo to the left, you're pretty much exactly where you want to be at the top.

Originally when we did the rotary drill, it focused primarily on the left side.

The assumption there was that the body was still going to be turning, still driven by the right side.

We found though, over time, that a lot of golfers just did the left side of it and didn't turn, so we had to think of a different way of explaining the same thing.

Both arms are still going to be basically in the same spots as before, but the left arm is going to be a lot more passive as you go back, to get the message across and get people to stop trying to push that left arm across their chest.

Neutralize the left arm in the golf swing. Relax it. Keep it in the box at address.

Let the right side do the majority of the work going back and you'll keep the club in front of you much more easily.

As a result, you'll be able to bring the club down much more easily, and your ball striking is going to improve immediately.

Get Your Free Membership to Watch "Fix Inside Takeaway - Pushing with the Lead Side" Right Now!