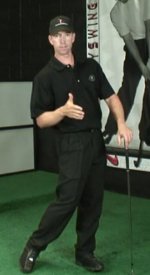 If you're a habitual hip spinner and have all that secondary axis tilt we talk about in the "Hip Spinners" video, the next step for you is to work on your shoulder and spine alignments at impact.

Hip spinners are always coming out of the shot. They hit a lot of thin shots and really struggle with the longer clubs, especially fairway woods off the deck. They don't hit the longer clubs very solidly.

They've got so much tilt that the left shoulder tends to pull up and out of the swing, getting the hands too far in front of the ball. As a result, they can't strike down on the ball, so they end up hitting a lot of really thin shots.

Once you've gone through the Belt Buckle Drill, you're getting yourself stacked into impact position over the left leg and your hips feel like they're staying shut, the next thing you want to work on is axis tilt and level shoulders at impact.

Let's start with axis tilt at impact. A lot of golfers get way more tilt than they need for a stock shot.

If you're hitting a driver and you want to launch it as high as you can because you're trying to hit it as far as you can, that's fine. Get all the tilt you need.

But unless you're a long drive professional, you don't need to hit it as far as you possibly can every single time. You need to hit it solidly, down the middle every time. That's what the driver is really all about if your goal is to score well.

If you're just out there trying to have fun and hit it farther than your buddies, that's a totally different animal. Go back to the Bomber Driver Series and have fun.

On the other hand, if you're trying to score as low as you can, hitting the ball solidly every time and consistently hitting it very straight and under control, you're going to want to get rid of all that excess tilt and the high left shoulder in the downswing.

How Much Axis Tilt is Enough? 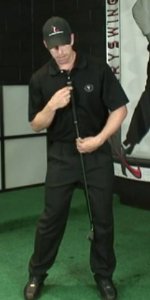 Tilt until the club touches your leg

The first thing to do is figure out how much axis tilt you need at impact. A lot of golfers don't actually know how much they need. This simple little drill will answer that question for you.

Take your stance and hold a club up to your center line, from your sternum to your belt buckle, like in the photo at left. Then just tilt your spine back, away from the target, until the club touches your leg. If you come down into impact with open hips, that's all the tilt you need.

It doesn't have to be exact, but unless you're doing other things wrong in your swing, that's plenty of tilt to get you shallow enough coming into impact and keep you behind the ball.

This exercise is a great, simple way to evaluate your form. If you get into your usual impact position and hold up a club you may find that the club head falls way outside your leg, indicating that you are getting too much tilt. You don't need that much, and it's probably going to hurt your hip if you keep doing it. 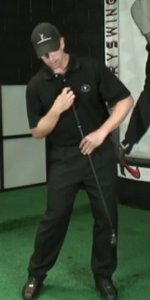 Too much axis tilt

You want to be stacked over the left side and get just enough tilt. If you're a hip spinner, your spine is going to feel very vertical when you're in the correct position.

That's very important. If you're used to being tilted way back at impact, which many of you are, getting the correct amount of axis tilt is going to make you feel like you're vertical or even leaning toward the target.

Use a video camera to check that you're doing this correctly. Use the exercise above to find out how much tilt you need, then set yourself in that impact position. You will probably feel very tall, even vertical, at impact.

Your head will still be behind the ball, but you'll actually be in a stacked position where you can compress the ball more effectively. 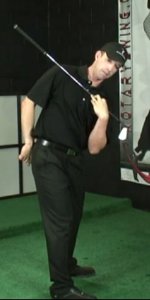 The right end of the club is higher

If you're a hip spinner, you not only want your spine to feel very upright, but also for your shoulders to feel very level.

This drill in particular will feel even more extreme. You want to feel like your left shoulder stays lower than your right one all the way into impact.

What does that mean, exactly?

As you can see in the photo at left, at the top of the swing the left shoulder is lower than the right. As you start down, you want to maintain that.

You should feel that your chest and hips stay shut, like in the Hip Spinner Drill. As you come down and start pulling your arms down to get back in front, you want to feel that the left shoulder is still below the right as you come into impact position.

Of course this is an exaggeration, a drill to help you learn what it feels like to stop coming up and out of the swing. 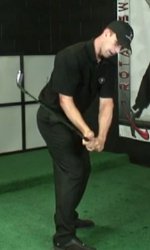 The left shoulder stays below the right

As a hip spinner, you're used to opening up your chest and pulling your shoulder up and out. As the shoulder comes up it causes you to lean back too much and get your arms stuck behind you, leading to more blocked shots.

As you come down and shift into the left side you want to feel that your left shoulder is lower than your right. Continue to pull with the left arm, fire the right, and get into an impact position where you're stacked over the left side.

Your spine should feel vertical or even that it's leaning toward the target. You will have a lot of weight on your left side and your shoulders will feel level at impact.

Because your right hand is lower on the club than your left, your left shoulder won't actually be lower than your right, but that's what it needs to feel like if you're a hip spinner.

How Will This Help?

This drill is critical because it teaches you what it feels like to keep your shoulders and hips shut, shift into the left side, pull the arm down, and keep that shoulder in the shot rather than pulling up and out of it every time and never releasing the club until the ball is already gone. 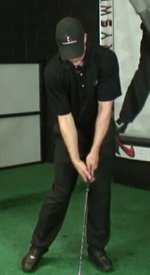 If you're a hip spinner and you combine this with the Tee Drill of hitting down on the driver and getting more on top of the ball, then add in the Belt Buckle Drill and now the Keep Your Spine Vertical and Level Shoulders Drills, you'll start to compress the ball like you never have before.

If you've always hit the ball a little too high, these drills will help you understand the effect that spine angle has on swing plane and path.

These drills will help get everything much more neutral so you can start hitting the ball a lot more solidly.