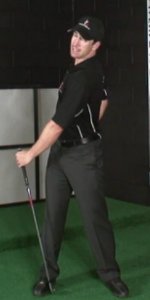 Is this you? Read on!

One common problem we see in golf instruction is over-rotating on the backswing.

Now, not everybody has this problem. If you have the opposite problem - you're not making enough turn and you're getting too arms-y in your swing - then ignore this lesson.

But if you look at your swing on video and you look like the photo at right, or you go back to the Necktie Drill and you're saying, "Yeah, I really struggle with that; the necktie is hanging across my belly," what you're doing is taking a good thing and misinterpreting it. You're misunderstanding how the rotation actually occurs, and this lesson is for you.

First of all, let's look at some misunderstandings that have to do with how the golf industry measures shoulder rotation.

How Do They Do It?

We all look at guys like Jamie Sadlowski and Sergio Garcia and Tiger Woods, and we see them making this tremendous amount of turn. If you've ever seen their data quantified and measured, their numbers seem astronomical.

Well, there's a reason for that; measuring processes differ, and they're not all looking at the same thing.

Someone recently did a 3D motion capture with Jamie Sadlowski to measure how much shoulder rotation he made, and the number was astronomical. We talk about making a 90 degree turn, and Sadlowski's figure was something like 150.

However, if you measured him again with a K-VEST that number might go down to, say, 100 degrees. Why the huge difference? Which tool is right?

Neither one is necessarily better or "right." The TaylorMade motion capture system is great and the K-VEST system is great; they're simply measuring different things.

Rib cage rotation is not the same as shoulder rotation

Some golfers or instructors see data like that and start saying that in order to hit the ball farther you need to turn your torso 150 degrees. Well, let's think that through.

It's not possible to turn your torso 150 degrees without your hips getting ripped around with you, and that's bad form. Let's take a look at what's being measured, what it means, and what kind of rotation will actually improve your swing.

Let's start with 3D motion capture. This system measures points on the shoulders, not just the actual rotation of the rib cage. They're measuring how far a specific point on the shoulder moves from Point A to Point B.

The K-VEST, meanwhile, is a pack that sits on the golfer's back. It doesn't detect shoulder blade movement - there are no sensors on the shoulders at all - so it will have no idea what the shoulders are doing. The K-VEST simply measures the rotation of the rib cage, using an accelerometer. 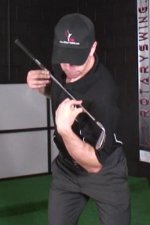 Let's look at how the two systems come up with such different numbers. It's very simple.

The golfer at right has made a 45° shoulder turn. He's holding a club to make it easier for us to see.

In the second photo he has kept his torso in that 45° position - the buttons on his shirt haven't moved - but he's reaching across with his left arm. This is called shoulder protraction, and it gives the appearance of a lot more rotation.

Seen from this angle, he now appears to have achieved a 90° shoulder turn. You can start to see the writing on the back of his shirt, even though his rib cage has remained in the initial 45° position.

Since the K-VEST measures actual torso rotation, it would read 45° for both of these photos. TaylorMade, meanwhile, is measuring the angle achieved by the shoulders, and would read nearly twice as much in the second photo.

But shoulder protraction is not actually rotation. The rib cage stays still, while the additional angle is a result of extending the arm; the same motion you would make to reach out to shake someone's hand. That's all it is.

Does shoulder protraction happen in the golf swing? Yes, absolutely; it has to.

If you see Sadlowski's TaylorMade numbers and say, "I want to hit the ball farther. I want to be like Sadlowski," and you start trying to rotate your rib cage 140 or 150 degrees, your hips are going to get ripped all the way around with you.

Nobody has that kind of separation unless you're just wildly flexible, and if that's the case, you're probably not playing golf in the first place; you're probably in the circus!

If you're rotating your rib cage as far as you can, you only need 80° or 90° of actual rotation. Shoulder protraction facilitates the rest of it. You can't keep your arms in the box the whole time and just rotate - you'll look like a robot, and you'll never get the free-swinging movement that's necessary for the arms to generate speed.

As you rotate back, the left shoulder is also moving out and forward. This helps facilitate width and it helps keep the club and your hands in front of you. It does that by letting the shoulder protract.

If you eliminate the shoulder protraction, that's where we see a lot of golfers get to the top and then try to make this huge turn. They're all bound up and they wonder why their hips are turning so much.

They know all the long-hitting Tour pros only turn their hips 35-45°, but they can't stop their own hips from turning 70°.

Shoulder protraction is the answer. You've got to rotate, but then let your arms protract to provide the rest of the appearance of rotation, rather than actually taking your rib cage and rotating it a full 120° or more. It doesn't work that way.

In short, if you struggle with getting your hips moving with you, you're probably trying to turn too far instead of letting the shoulder protract to facilitate the rest of the rotation - and the appearance of rotation on camera.

When you correct for this, you'll start to understand how the Necktie Drill works, providing a much better position at the top rather than continuing to rotate your torso, hurting your back and putting yourself in a weak position.

Remember that the shoulder has to protract as you're rotating back, and you'll get into a much more powerful position with a lot less effort at the top.

Get Your Free Membership to Watch "Torso, Hips Over Rotating in Backswing" Right Now!