How to Properly Square the Club Face

Do you occasionally hit wild golf shots? Or struggle with a flippy impact position?

If so, this video will help you develop the perfect impact position you've always wanted for hitting powerful golf shots.

Most golfers flip the club in an effort to square the face. They sense the club face is open in the downswing and know they need to do something to try and send the ball toward the target.

Of course, this is impossible to time consistently and leads to very wild golf shots. The cure for this problem is to learn how to square the club face early. 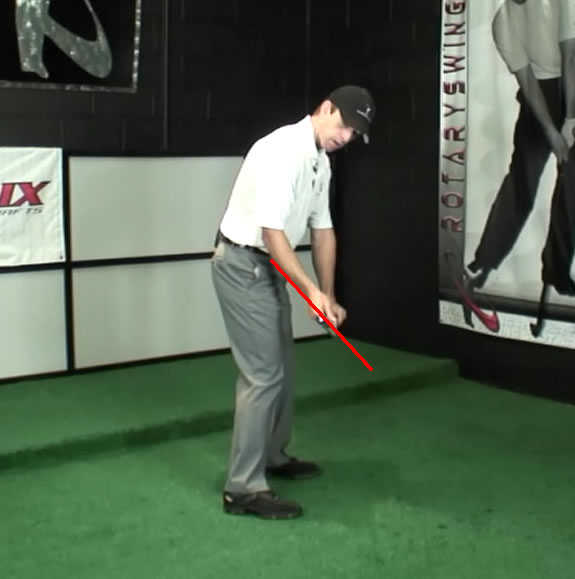 Does your club face look like this in the downswing? Here's what you need to do...

As you can see in the picture above, I'm demonstrating what most golfers do in the downswing.

In an effort to produce lag, they leave the left wrist in a "cupped" position which leaves the club face wide open unless they have an overly strong grip. At this point, the golfer is forced to flip to keep from hitting it 90 yards right of the target!

In RST, we want to start squaring the club face very early in the downswing, even during the transition.

This way, the club face is gradually rotating back to square throughout the downswing and much more slowly. This is measured in degrees of rotation per second.

Research has shown that tour pros such as Tiger Woods rotate the club face closed through impact as much as 1000 deg /sec slower than the average high handicapper; once again proving why he is so much more consistent that most anyone else.

If Tiger had to rotate the club face closed at the last second as most amateurs do, he'd struggle hitting the ball straight just like everyone else. But he doesn't, and in this video you'll learn the secret of the pros and one of the core fundamentals of RST - to square the club face early in the downswing. 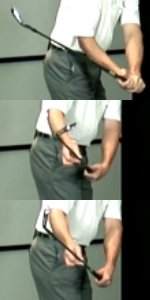 Club face open (above), shut (center) and neutral (below)

A lot of golfers don't understand what should be happening during the downswing and during the transition, and specifically what's happening with the golf club as you're bringing it down into impact.

In this video, we're going to talk about, from the down the line view, what I refer to as squaring the face early, and what that's going to do for your golf swing, especially if you're used to coming in with a very, very open face. So many golfers struggle with this, then they have to try and time a flip at the bottom to get the club face back to square at impact.

First, let's look at what that looks like. As I come down into impact, if I'm in a decent position at the top, when I start coming down a lot of golfers I see are with the club face in this position coming down. This is very, very open, versus this would be very shut, and this would be where we're working towards.

As they start pulling down, they just start ripping the handle of the golf club down, typically in an effort to produce lag, which is totally the wrong way of going about doing it. They leave the club face wide open, so as we get into this position where we're almost at impact, the club shaft is parallel to the ground, the club face is still kind of looking at the sky.

As they come down, now the club face is still very, very open. Then right at the last second they try and flip it and stop everything. That's why a lot of golfers end up with a really flippy impact position. They look like this, where they're flipping it. 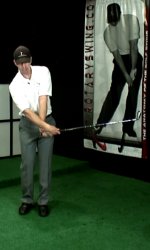 It's because they're doing it in an effort to square the club face. You can't blame them. If they don't do something to try and get that club face square, the ball's going to go a mile right, and it's going to be a very weak, slappy slice.

The cure for that is to do things correctly - as always, we don't put Band-Aids on swings with RST - is that you start working to square the club face early in the downswing so that as you come down there's very little rotation, going through impact, of the club face. I'm going to talk about what that means.

If you just imagine that my club face is sitting here - I open it, so you can see the club face, and shut it really fast - that's going to be measured in terms of degrees of rotation per second. You can imagine, if I take this club and spin it as fast as I can, let's just use a ballpark number and say that's rotating at 1000 degrees per second. It's rotating very rapidly.

In a good golf swing, we want to have very little rotation, or very slow rotation, through impact. We want to square the face early in the downswing, so that degrees of rotation per second might go down to 250-300 degrees.

Instead of having a flash flip coming into impact, and hope we manage to time that consistently, which we'll never do, that club face is going to be already pretty square and rotating only a few hundred degrees of rotation per second. That's the ideal, so that you're not trying to flip it. 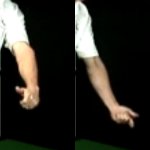 The only way that you can do that is to, obviously A, be in a good position at the top, proper grip, etc. We spend all this time working on those things but, too, now as you start coming down one of the first keys is that you can start flattening this left wrist. That's actually going to happen a little bit at the top.

This is all I'm doing. I'm taking my hand and I'm just rotating it this way. Let's see what happens to the club, versus if I just pull it down the club face is going to be wide open.

Now I'm going to take it and just do that same motion. I'm going to start rotating it down. Now the club face is starting to look at the ball. Now my degrees of rotation per second has been cut down dramatically.

That's a critical piece in the downswing. If you don't do that, you're going to have to have some sort of flash speed at the bottom and hope that you save it with your hands, and you're always going to struggle and be inconsistent. 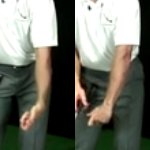 Back of hand points down (left), versus out (right)

As you've mastered the backswing and you're now onto working on the transition, you want to start working on very slowly adding some rotation, flattening that left wrist so that as you come down into impact you're going to feel that the back of your hand is pointing down at the ground at impact, versus coming in very open where the logo of your glove is pointing away from you, then flipping it at the last second.

Here, start rotating it down, get the logo of your glove facing the ground, and then go through the Left Hand Release Drill, and you will feel what it feels like to have a proper impact position and slow down the release of the club so you're no longer trying to learn to time a flip.

Get Your Free Membership to Watch "Square the Clubface Early" Right Now!