Golf instructors teach many different approaches to the takeaway. 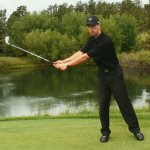 There are many ways to perform the takeaway - not all of them are correct!

There are a million ways to do it, but there's only one optimal way to do it efficiently and correctly, while keeping yourself centered.

That's a big key to the Rotary Swing; you want your spine to remain as a fixed center point, and use your muscles and joints to rotate around it efficiently. The beauty of it is, when you do it correctly you're only performing a few inches of movement. That may sound crazy, but in a moment you'll understand.

It's Not Just Club Position

The club travels maybe seven or eight feet during takeaway; we'll call it two and a half yards or so. If you sway along with it and allow your head and arms shift off to the right along with the club, you're obviously going to have to shift it all back to the left on the downswing.

The takeaway is more than just getting the club into position

Shifting to the right may put the club in about the right position - it may even look OK from down the line - but it leaves your body in the wrong position and is detrimental to the golf swing.

If your goal is to stay centered and rotate around your spine, you clearly don't want a big shift to the right. It's true you'll be making a weight shift to store power in the swing, but you don't need a big upper-body sway.

Let's say we were going to design the simplest machine possible to achieve this movement; how would we do it?

If you understood the Push vs. Pull lesson and how to rotate around your spine - pulling from the right side rather than pushing from the left - then this will be a piece of cake because all you're going to do is move your shoulder blade a couple of inches.

The shoulder blades are the bony plates that sit outside your rib cage at the top of your back. Your right shoulder blade is going to move slightly down and in toward the spine - remember we're trying to stay centered. To stay centered, you move toward center; it's as simple as that.

For those with an engineering background, you're going to create centripetal force to allow the club to move out and around. This is an important concept in the golf swing: You're always going to be moving in the opposite direction that the club is moving.

That may sound wrong to some, and it's actually the number one problem for most amateurs; they want to move their body in the same direction that they're trying to move the club. When that happens, all kinds of things go wrong.

Certainly it's inefficient. In terms of rotary motion, centripetal force always moves in the opposite direction of centrifugal force.

Now Apply It to the Golf Swing 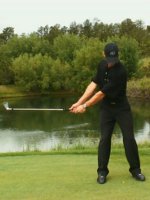 Let's look at it in real-world terms. All you're going to do is move your shoulder blade two to three inches. The movement is so small and so efficient, you won't believe how easy it is to get a perfect takeaway.

Move your right shoulder blade in towards your spine, and slightly down. It's two or three inches of movement.

It's Not the Only Way, Just the Most Efficient Way

Of course you can try to learn to move the club two and a half yards some other way. 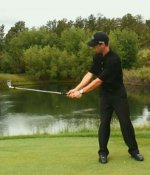 Other methods are not consistent

You can try to put it in the same position every time with your hands, but that's pretty hard because you're not looking where you're trying to move the club. It's happening behind you, and you're trying to think about sending the club up and to the right.

If you want to get the club in the same spot every time, you can simply learn to move your shoulder blade two and a half inches.

The choice is yours, but if you want to move efficiently, two inches of shoulder blade movement in toward your spine will get the club into the exact same spot every time.

It Comes Down to Science

This is the way your body is designed to work. If you want to rotate around your center - your spine - you need to move toward center. You move your shoulder blade in toward your spine, and the club moves out and away.

Try it again. Just concentrate on moving your shoulder straight behind your head.

On the downswing, the same thing happens in the opposite direction.

When you start to think about your golf swing in these terms, you begin to understand how rotation really works in the Rotary Swing. Two inches of movement; that's all you need to know for the takeaway.