Various versions of Tiger Woods’ golf swing have dominated the world of golf ever since he burst onto the scene with a record-breaking 12 shot victory in the 1997 Masters.

Injuries and the passage of time may have blunted Tiger’s competitiveness at the highest level. But the features of the swing with which he reigned supreme in the game remain key elements in the methods of those champions such as Brooks Koepka and Dustin Johnson who have followed in his footsteps.

Very few players, even in the professional ranks, can match the strength, flexibility, and sheer athleticism of these guys. But golfers of all abilities can benefit from a study of the technical and biomechanical aspects of the Tiger swing.

The Biomechanics of the Golf Swing

Whole books have been written on this subject, complete with extensive technical and physiological analysis of the role played by each and every muscle in the body.

But from the point of view of improving performance and increasing power output, all that it’s really necessary to know is that the good golf swing consists of a rapid stretching and shortening of the body’s largest muscles – particularly those of the back and hips.

In practice, this means storing power by turning the upper body against the resistance of the lower body during the backswing. And then releasing this latent power by initiating the downswing with a powerful rotary movement of the lower body (hips).

Maximizing Power with the Tiger Swing

In the swings of really good players, this movement of the hips happens while the upper body and club are still turning away from the ball, thus intensifying the stretch of the back muscles and creating maximum clubhead speed.

And for this strong turn of the hips to happen, it is essential for the legs to brace strongly against the ground – the ground reaction force thereby generated becoming another major source of power.

This bracing of the legs is shown in a pronounced bend of the knees at the start of the downswing – a power indicator which has perhaps never been clearer than in slow-motion studies of Tiger’s swing. [https://www.youtube.com/watch?v=qOr3tm8Bx94]

A direct consequence of this flex of the knees is that Tiger’s hands drop vertically towards his trail (right) hip, flattening his swing plane and positioning him perfectly for a full and powerful release of the clubhead through the ball.

This flattening of the plane is seen in the swings of almost all good players, and contrasts starkly with the steepening of the plane and “casting” of the club that robs so many handicap players of distance and accuracy.

Now, we’re not saying that everyone can aspire to the standard of play of Tiger and the top tour pros - at least not without spending countless hours on the practice range.

But we do say that a few relatively simple technical changes can make an enormous difference in your performance and enjoyment of the game.

Does Tiger Woods have an upright swing?

Who has the smoothest swing in golf?

Sam Snead is considered to have the smoothest swing in the history of golf.  He claims he has never had a blister practicing or playing golf.

Early in his career and through his prime, Tiger Woods could reach 129mph.  Father time and injuries have him now around 120mph with his swing speed.  Despite injuries and age, this is an amazing swing speed!

A Rotary Swing using the core and body to generate speed is an excellent way to swing more like Tiger Woods.

Perhaps no golf swing has ever been studied more than Tiger Woods' swing. I have personally invested atleast 1,000+ hours in the pursuit of understanding more about how he swings the club and uses his body.

Without fail, the one thing that has always stuck out in my mind was the incredibly powerful unwinding of his left hip and core during the transition and downswing. No one appears to use this part of their body to power the downswing more than Tiger and perhaps no one else is as powerful as Tiger, pound for pound. If you want a study golf biomechanics, then Tiger Woods old swing before Sean Foley is a study of near perfection.

Sure, there are some that can swing as fast or faster, but they may either be stronger, taller or simply not as consistent. Tiger's swing has mesmerized millions of people and had thousands of golfers attempt to imitate it, but none have succeeded in understanding the complexity of the motion - until now.

Having spent a great deal of time studying golf biomechanics and anatomy, a greater understanding of Tiger's unique motion came to me.

It was, in fact, an epiphany really. Having tinkered with learning Tiger's body movements over the years, there were things that I felt I just couldn't achieve because I wasn't strong enough, flexible enough or simply not coordinated enough. It turns out, none of the above are true.

The truth was that I wasn't using the core muscles correctly to swing the club. Being a golf instructor known for teaching the use of the core muscles to power the swing, I found this interesting, but I worked to further my understanding of the proper feelings and sequence of the muscles that fire and the results were astounding.

Below, I have posted some screen captures to show you the similarities between a Rotary Swing Tour in progress after only one week and the current swing of Tiger Woods. 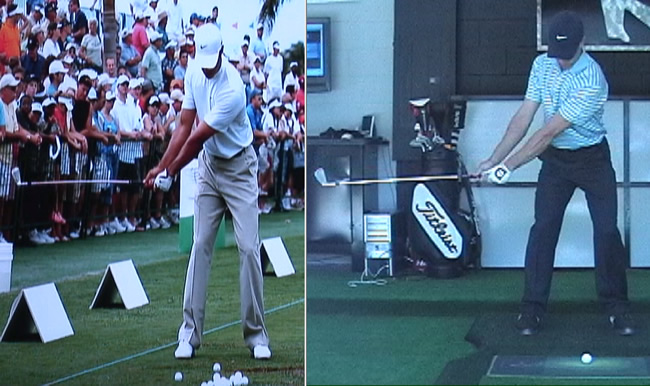 Halfway back, the takeaway movements of the body look very similar. The hips have turned a minimal amount, the turn is being completely controlled by the core and back muscles. 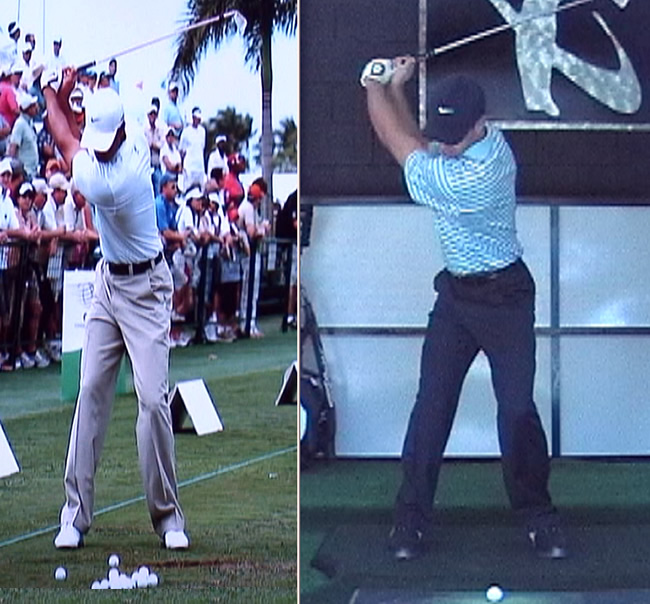 At the top of the swing, both of us are fully torqued up and ready to uncoil the body using the muscles of the core. 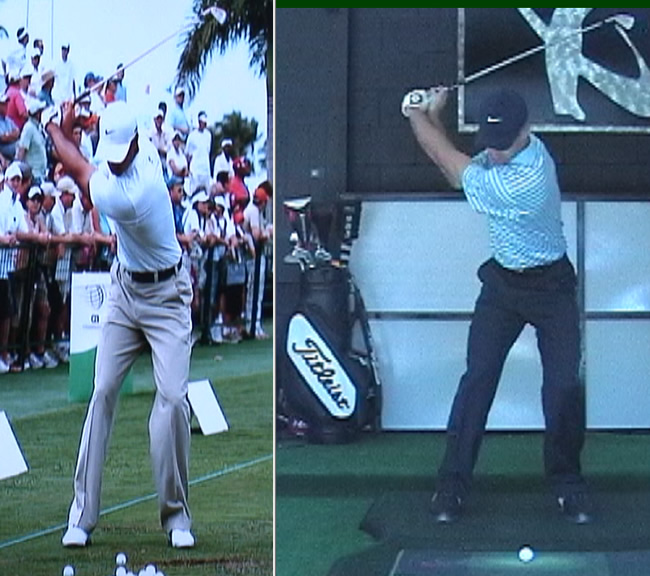 Undeniable evidence here of the transiton and downswing movements being driven by the core and not the shoulders. Note how our backs are still facing the target but we've made a very clear move onto the left foot while the arms are passive and allowed to fall. 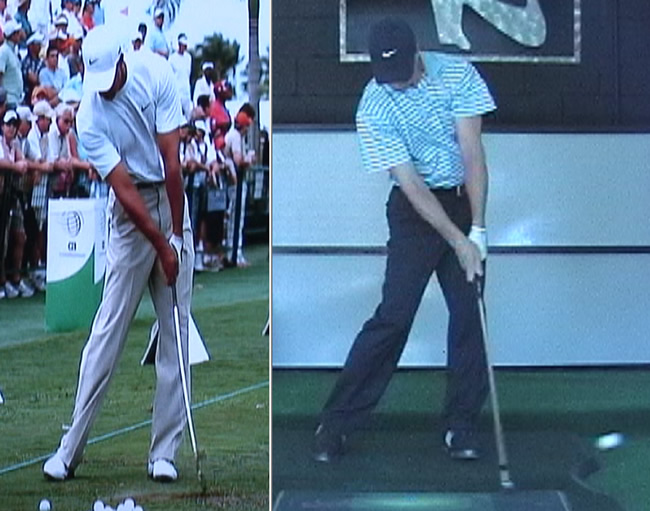 A split second after impact, the two positions are very similar once again. The weight is fully on the left heel, the head is back and core is continuing to pull the body around to the left.

In less than a week, my swing now very closely resembles that of Tiger Woods. Obviously, the idea in golf instruction is not to replicate someone else's golf swing, I obviously believe in getting the golfer to achieve a functional swinging motion rather than a cosmetic one, however, this is purely built out of function.

In other words, in working through the biomechanics of the body, I achieved positions that match Tiger's because Tiger uses his body biomechanically correctly in the golf swing! Trying to match Tiger's positions based on what you see on video as so many have tried before is completely futile because you are simply learning to match visible positions and it not possible to match his positions without using and feeling the correct muscles as the motor of the swing.

Of all those interesting points, perhaps the most fascinating of all is injury prevention. It's amazing how many people undergo surgery for golf related injuries each year, and most, if not all could be prevented by swinging the golf club the way the body was designed!

So, if you have golf related injuries, soreness, aches or pains, you will want to pay very close attention to the new content coming to the Member's Vault over the coming months! For now, stay tuned to the Golf Blog as it is often updated several times a day!