Tiger Woods has made many swing changes with Sean Foley that are potentially harmful for your health! As this video discusses, there are two key moves that Tiger is working on that put unnecessary stress on the lead hip and spine.

Over time, these moves can cause degenerative wear on the cartilage in his left hip and will undoubtedly put increased stress on his spine stabilizer muscles and ligaments. In my opinion, these moves are going to effectively "age" Tiger's body much more rapidly than his swing before and lead to back and hip pain/injury if he doesn't continue to work out to stay incredibly fit and strong. Even still, there is a very high increase of injury in my opinion.

In the image below from the video, I'm demonstrating the look of Tiger's new follow through which is created by "pushing" the right shoulder through the shot. This position can only be achieved by rotating aggressively around the spine in the downswing when the stresses on the spine are already very high. Tiger no longer finishes with his chest facing the target, his chest now faces well left of the target due to the increased 70+ degrees of rotation in his new swing with Sean Foley. 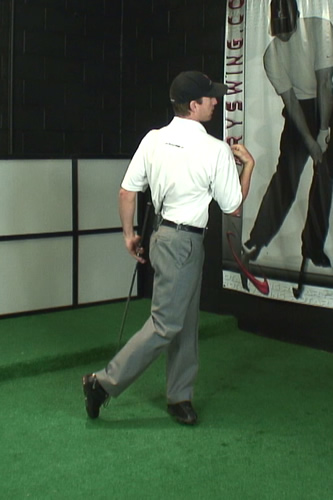 The other critical move Foley is having Tiger perform is sliding his hips laterally toward the target to move past NJA (neutral joint alignment) at impact, where forces on the left hip are enormous.

Putting the hip past NJA and then pivoting aggressively on that hip tends to lead to long term degenerative wear on the cartilage of the hip and is why so many golfers of the 70's era ended up with hip replacements later in life. The labrum of the left hip also is placed into extra stress from this new impact position.

Is Tiger setting himself up to get a new artificial hip from these two new moves? Only time will tell...

The big news of late is Tiger Woods working with Sean Foley on his swing now, and people trying to understand and figure out what he's trying to do in his golf swing and how that's going to impact his ability to hit the ball and play, and so on and so forth.

Of course, I have a few opinions on what I think's going on there.

I've had the privilege of seeing Tiger practice at Isleworth, and it's pretty interesting the things that are going on. I want to explain to you what you can see Tiger drilling on TV right now and what, in my opinion, it's going to do to Tiger's swing and his body for the long haul.

The first thing I want to talk about is Tiger working on getting himself way far forward outside of neutral joint alignment with his left hip at impact. This is one of the things that is kind of a stack & tilt trait. 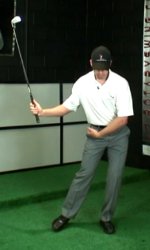 Even though Sean Foley doesn't really consider himself a stack & tilt guy, per se, because he's working on keeping Tiger much more centered with his head or...not quite reverse pivoting but basically - versus having a shift to the right a little bit - he's staying very much on this left side now and his head's definitely not moving away from the ball laterally at all. If anything, it's possibly even starting to move slightly forward.

You need to do something to shallow out that move because when you're staying on this left side the swing tends to become very steep.

As he's doing that, as he works on moving his hip way out in front, it shallows out. The lateral movement provides the ability for the swing to shallow out. That's what that move is accomplishing.

Because Tiger's always bemoaned getting stuck, and so on and so forth, feeling like you're staying more on top of the ball is definitely a way to help circumvent that. This shallowing out move, of a lot of lateral movement, helps balance out those two moves. They work hand in hand together. 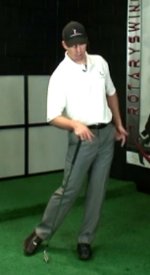 Rotating on the hip outside neutral

The downside of that is that when you're taking your hip and shoving it way out of neutral and trying to rotate on it, it causes a lot of excess wear and tear. It's just basic biomechanics and anatomy. Any doctor will tell you, if you're getting like this at impact and turning and hitting as hard as Tiger does, it's going to provide a lot of wear and tear.

When you're doing this and really working your hips through, it's going to feel like you're putting a lot of power into it because, muscularly, you are. But of course it's not very efficient, in my opinion. It's not the most efficient way to do it. The big concern is whether or not Tiger's hip will hold up to this over the long haul. 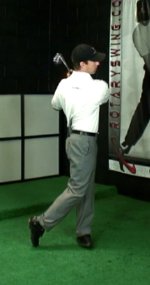 There's a reason that every golfer from the '70s who had a hip way outside of neutral in this big lateral Reverse C ended up with a hip replacement as they got older. Hopefully that won't happen to Tiger, but that's one of the major negative things that I think Sean is working on in Tiger's swing, that I think is not necessarily in Tiger's best interest for the long haul, for his golfing career.

The second thing I want to talk about - again, all these pieces work hand in hand; they are effective for striking the ball, absolutely no question there - is coming back to the wear and tear on the body issue here. Sean wants Tiger to take his body and rotate it through pretty aggressively, versus where Tiger was always staying a little bit more shut with his body, bringing his arms back in front and letting the club and arms release.

Now he's getting way outside of neutral and then rotating. That's why you see Tiger finishing with his right shoulder really close to the target now, and he's really rotated his body a lot. 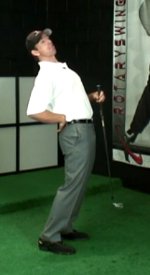 Again, you don't need to be a biomechanics expert to realize that if you're turning your body this much, as hard as you can, over and over and over again, eight hours a day, as much as Tiger practices, you're going to put a lot of undue stress on your spine.

There's two things that your spine really, really hates. The first one is compression. That one is, just imagine compressing your lower back by arching your lower back. The second thing is rotation; putting tons and tons of force - the amount of force that goes through a golfer's body, especially someone as fit and powerful as Tiger, rotating their body as hard as they can through impact - is tremendous.

Now couple that by the fact of how hard Tiger practices, how much he plays, and now you've got a recipe for disaster because you're not only having the hip in a position where it's not designed to rotate in an optimal way, then you're forcing the golfer to rotate as hard as he can. 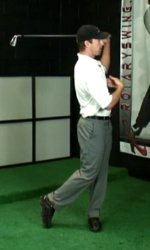 Tiger's old finish was more square to the target

He's now putting more stress on the hip and more stress on the spine, versus you would see Tiger's older finish, his body would end up a lot more square to the target. Now he looks like he did when he first came out on tour in '96/ '97, where he's wrapped all the way around.

Again, it feels powerful, not good on the body and it's inefficient. He's not going to pick up anything from it. He may feel that he can do certain things that he was struggling with before, but with a couple other tweaks from where he was before he would have been, in my opinion, in much better shape.

Now he's putting himself in a position for a lot more wear and tear on his body and potential injury. Keep that in mind when you see what Tiger's working on. We'll just see how this unfolds as the future plays out.