Over my 15 years of teaching, I've come to many definitive conclusions. One of those is what I consider the NUMBER 1 PROBLEM in most amateur golf swings: poor weight shift in the downswing.

The weight shift back to the left is so critical in allowing the downswing to unfold in the proper sequence. This sequencing lets you take advantage of the stored energy created during the backswing.

Unfortunately, most amateurs don't have a clue how much to shift or exactly HOW to shift, and in this video and article, I show you exactly how to do it like the best in the world.

A Great Checkpoint for Weight Shift 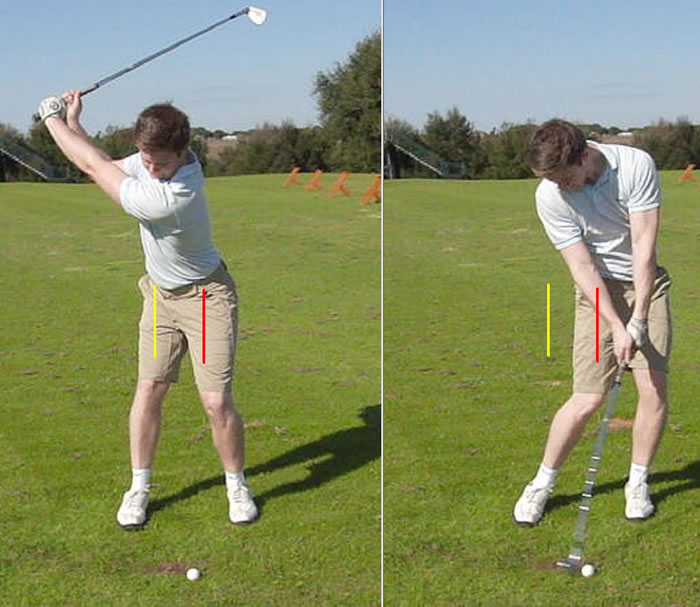 In the image above on the left, I've drawn two lines that represent the center of Greg's hip sockets (roughly) at the top of his backswing.

At impact, you can see that his right hip has replaced where his left hip was at the top of the backswing almost exactly. In other words, Greg has shifted laterally toward the target an amount equivalent to the entire width of his pelvis.

Most amateurs get nowhere near this amount of shift because they focus on bringing the club down first from the top.

Let's take a look at another professional golfer's shift: 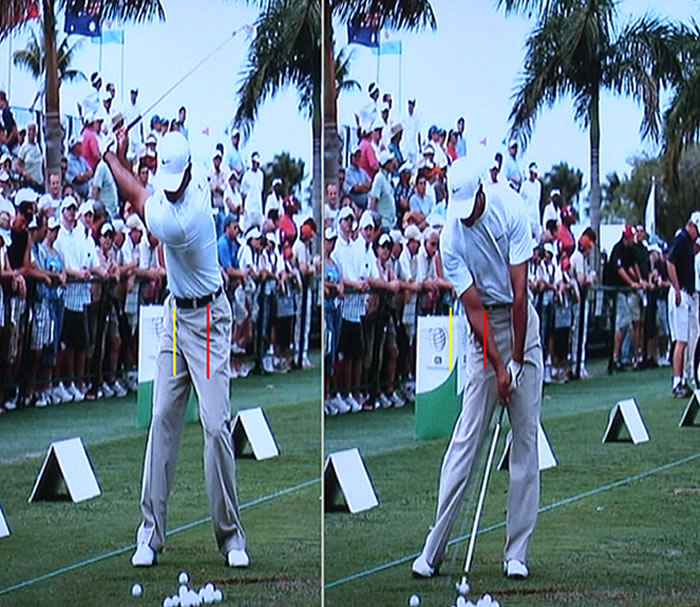 In this sequence of Tiger Woods, you can see the exact same shift.

How to Shift Without Sliding

Watching videos of these two golfers, you would never accuse either one of them of "sliding" in their downswings. However, if you do not have a proper shift in your downswing right now and you move this much, you will likely feel exactly that.

When I teach my students how much lateral movement is necessary to get into a proper impact position, they almost always say they feel like they're sliding. But, if you make this lateral move and then engage the left glute by driving the left ankle into the ground, your lateral move will stop before impact, and you will be stacked and braced over the left side to deliver a solid strike to the ball.

I had Greg feel the moves I describe in the recent "Tiger Woods Squat" video. This led to Greg significantly lowering his ball flight to a much more penetrating one with better compression. 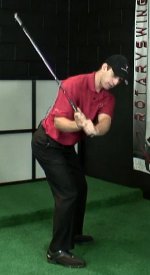 One of the most criticized motions in Tiger's golf swing from the TV pundits has always been the squat move, where his head lowers during the downswing.

What that looks like is that he gets to the top of the swing and he starts to get leverage. He looks like he squats and his head lowers a little bit, then it comes back up a little bit. Sam Snead had a similar move. Lots of golfers who have built a lot of power in their swing without a lot of effort have done a very similar move.

I've always argued that it's the most powerful move in Tiger's golf swing, and I'm going to show you why.

That squat move allows a couple of things to happen. The first thing is it allows you to use the ground for leverage and build a stable base. That's critical because really, as we've learned, we're just wanting to maintain lag to here and then we release it at the bottom. You need a stable base in order to have a solid impact position. 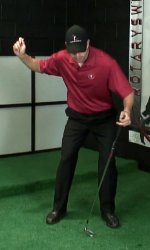 If your legs are just spinning out from under you all the time and you're always just flipping at the ball with the club, you don't have any stability at impact. You need to have a stable base so that when you fire that arm and release the club you have control at impact.

Squatting allows you to use the leverage of the ground to push against it and activate your glute muscles. All these hip stabilizer muscles and glutes allow you to anchor the hips and feel stable, rather than just lazily spinning through impact.

You want to feel powerful and stable at impact and be able to leverage the ground. If you don't squat, you can't do that. If you're just here, and then you just spin, it doesn't look like I leveraged anything.

I need to feel like I'm loading my glutes and anchoring myself to the ground and pushing my feet into the ground so that as I come through in the next move that we're going to talk about, I'm able to perform it correctly. 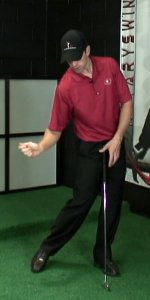 The next thing is, for most of my better golfers, they're all hip spinners. Almost all the professionals I work with struggle with getting a little bit stuck underneath coming in, and then spin through and they end up hitting a higher ball flight than what they want. That puts too much spin on the ball, and also leads to blocks and hooks.

When I teach them this move, it helps slow down their hips. That's a critical piece because you don't need fast-spinning hips in the downswing. All that does is get your arms stuck. Your hips don't have to move very far in the downswing to get back to where they need to be at impact, but your hands have a very long ways to go.

If you go to the top and just spin your hips, your hands are always going to be in this position. They don't have time to catch up. They simply can't move that fast, but your hips can snap really quick and leave you in this stuck position all the time.

We spend a lot of time working with these golfers to slow their hips down so that they have time to sequence everything and get their arms back in front of their body at impact. 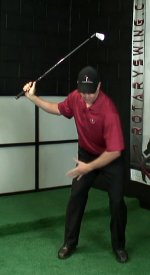 This is one of those critical moves that, as they squat into the ground, it slows the initial rotation down so that what they're able to do is build a stable base, start pulling their arms down, and then at impact they're able to leverage the ground with both legs, and push up off of it.

That might sound like a strange concept, but it's critical. What's happening is, as I'm doing this squat move, then as I'm coming up out of it, I'm pushing against the ground. Quite literally, I'm pushing my left leg - both legs, but primarily the left - and straightening it.

If you're a typical amateur, higher-handicap golfer, you're not ready for this stuff yet, but for pros or better amateur players who are looking to build speed and power in their swing, this is a critical move to stabilize and then get that last bit of release at the bottom. 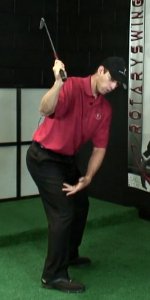 If I just went to the top and spun my hips, all I've got is a really weak club head coming through impact. If I go to the top and I squat and leverage my glutes, push into the ground, as I set into this left side and I start to fire those glutes pushed against the ground, now I've got a big snap at the bottom and a ton of release. It also helps slow my hips down, which gives me time to get my arms back in front.

If you're a hip spinner, learning to squat into the ground and feel like you push your feet into the ground, then fire everything through, it's going to help you build a lot more speed with a lot less effort.

It will finally teach you what it feels like to leverage the ground and activate the hip stabilizer muscles, the glutes, and all these big, powerful muscles in your torso and your trunk, and finally build power in your golf swing without a lot of muscular effort.

Get Your Free Membership to Watch "The Tiger Squat" Right Now!