Clubface Roll - The Effect on Loft on the Modern Driver 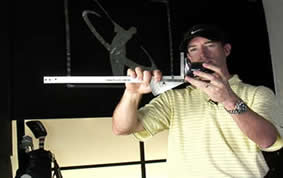 There are numerous things that affect the overall distance you will hit your drives and one of the biggest factors is not your golf swing, it's your equipment.

Today's modern high performance drivers are far more advanced then drivers of just 10 years ago, but some old "technology" remains the same. In this video, I am discussing the effect of the "roll" designed into the clubface and how it can dramatically help or hurt your driving distance.

As you will learn in the video, the amount roll a clubface has, or better yet the radius of the roll, can affect the true loft on the clubface as much as 8° or even more depending on the particular design.

This means that depending on where you strike the ball on the clubface, your 9.5° driver may have 13° or 6° of actual loft at impact! To give you an idea of just how significant this is, observe the screen shot below: 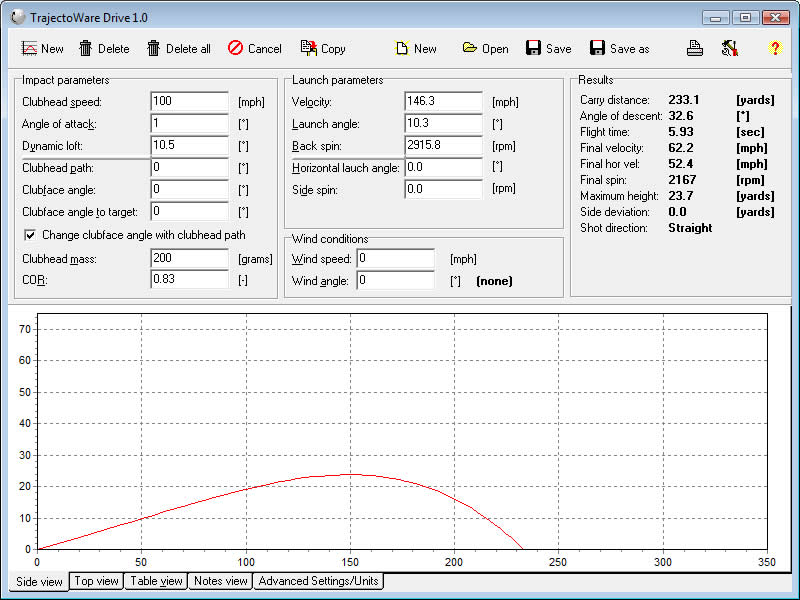 In this scenario, the golfer has an average clubhead speed of 100 mph with a slightly ascending angle of attack and carries the ball about 233 yards with a 10.5° driver. This is assuming he hits it near perfectly in the sweet spot. Now, let's say that that same golfer with average clubhead speed catches it a little low on the face and now only has 6° of loft at impact: 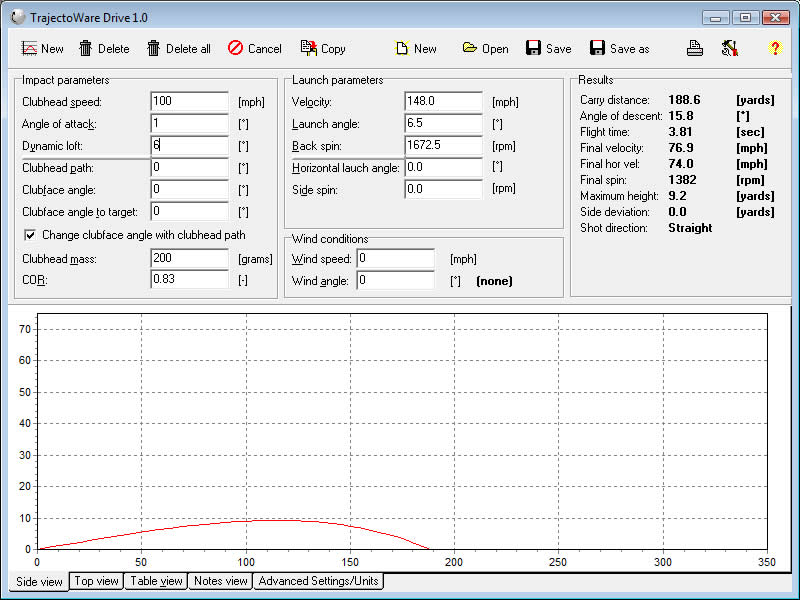 Yikes! Our golfer now only carries a theoretical 188 yards, and this is assuming he or she is getting maximum ball speed. This wouldn't happen in reality because obviously the sweet spot has been missed severely for this to happen, so the numbers would be even worse.

So, the golfer loses about 35+ yards of carry because his driver has much less loft at impact when struck low on the face due to the roll that was designed into it! This is a case where the manufacturers are not doing us any favors with their designs.

However, Tom Wishon does make a driver that doesn't have any roll on the face and this can help you achieve more ideal launch conditions, no matter how high or low you strike the golf ball on the face.

Long story short, watch the video to understand more about how the roll of the clubface affects your drives and you will start to have a much better idea of exactly how much loft you actually need to get properly fitted for the right driver.

As part of the Bomb Your Driver series, one of the things that's incredibly important to maximize our driver distance is our equipment.

Today I'm going to talk about the way driver heads are designed, especially the modern driver because it makes a massive difference in maximizing your driver yardage.

I've got a driver head here that on the bottom is listed as 7.5 degrees. Now, many of you know that what the manufacturers state on the bottom of the club is not always accurate, and there are tolerances within typically plus or minus one degree, that says any club that you go and buy off the shelf, if it says 7.5 on the bottom, it could actually be 6.5 or 8.5.

Horizontal and vertical curvature of the club face is known as "bulge" and "roll."

There's a two degree possible variance that's built into their machining tolerances that could make this club play very differently than what you actually think you're buying.

The simplest way to check that is, I have a wood loft gauge here. What this does is it actually allows me to sole the club properly and see what the true loft of the face is, but that's not exactly the trick here.

Measuring the club face with a wood loft gauge

What they found is that instead of hitting a big, nasty, wicked hook, if the face was actually pointed a little bit right it would create the effect of a little draw, and vice versa on the heel. That's why driver faces and a lot of fairway wood faces are not actually perfectly flat.

What you can do with this simple little gauge is you can take it on here and, once you get it soled properly - and I know where the sole spot is on this - I can set it up so that I can measure where the center of the club face loft point is.

In doing so, I know that this - I've already measured it, of course - the actual direct center of the club face is about 7.5 degrees. This is a hand-picked club head, so I know that the loft is accurate.

Finding the center of the club face loft point

What's interesting though is that, assuming that I hit it in the center of the club face, I'm going to get the desired 7.5 degrees of loft on the club face that I'm looking for.

However, let's say I make a good swing and I hit it on the top of the club face. Now we're looking at some very different characteristics. As I sole it up properly here and I go to the very top of the club face - this is going to have to move a little bit, but we'll get close here - it's about 7.5 there, so we go to the top...we're closer to 12 degrees of loft.

Now I've taken this driver, which I purchased to be 7.5 degrees, and I miss hit it a little bit and now I've got a driver that's going to play at 12 degrees. Now I'm looking at massive amounts of spin because, for each degree of loft that you go up in your club head, for each single degree, it's about 300 rpm of spin, roughly.

Hitting off by just .5" can drastically change angle

Going from a 7 degree driver head, hitting it in the center, to a 12 degree is 5 degrees obviously, so that's going to be the equivalent of about 1500 rpm of spin. What's that going to mean in terms of driver distance? Depending on your swing speed and your typical launch characteristics, it could cost me personally as much as 40 yards. It's a dramatic difference.

For you, you may actually find that hitting it higher on the face gives you more distance because you actually need the loft and you need the increased spin, so it's very, very important that you start to understand how your equipment is designed to work, and how it actually is shaped.

If you go to Tom Wishon Golf, he actually has driver faces that have a perfectly flat face so the loft is true from top to bottom, and that's ideal, but very few manufacturers do this. Simply, it's a way that they've always done things and they haven't changed it and that's the way it is.

There are some pros and cons. People believe in the vertical gear effect and those types of things, but long story short the biggest thing is how much loft you have on the club face at impact because it's going to dramatically impart a lot more spin if you have a lot more loft.

Depending on how your club head speed is, if you have a lower club head speed, hitting it higher on the face you may find that you gain a lot of distance. Certainly, most everyone will find more distance versus hitting it very, very low on the face, unless they've got a driver that's got entirely too much loft for them.

Start to understand your equipment. If you can spend a little bit of money or go to a club fitter and get a loft/lie gauge you can start to measure your equipment and see, "When I hit it really high on the face" - because now you know how to see where you're hitting it on the face, from the last video where we used the dry erase markers to mark the balls - now you can start to see where you're going to start to get maximum distance across the face at different lofts. This is going to help you in choosing a better driver for you in the future.

Understand your equipment and it's going to help you hit longer drives.

Get Your Free Membership to Watch "Clubface Roll - Affect of Loft" Right Now!