There are a lot of poop about how an iron should strike the ball, versus a wood. With today's technology - how modern driver heads are shaped and where the center of gravity is - you see golfers doing a little bit of everything.

Some tee the ball way up off the ground and others way down low, and they're all trying to do the same thing. They all want to get the maximum distance.

Fortunately, no matter what you've been doing, once you understand the fundamentals you can absolutely get more distance. Unless you've got every single factor perfectly optimized, there's always more distance to be gained, and of course most amateurs aren't even close to optimizing every single thing.

Use a SlightlyDescending Blow With the Irons

Let's start off with the iron. The iron requires a slightly descending blow. Notice we say slightly.

Shaft too steep (above) and too shallow (below)

A lot of golfers come down and hit the ball off their back foot with lots of forward shaft lean and forward press. As they come down they're really just chopping down on it so they get an extremely steep divot.

Now, that does deloft the club, which does help the ball go farther, but one of the most misunderstood aspects of ball striking for the amateur is how much spin they put on the ball.

We've been doing a lot of studies, testing with a launch monitor to determine what produces optimum ball flight, optimum spin, optimum launch angle, and so on.

The key to great ball striking, and what we've seen for many years in the world's best ball strikers, is a very shallow angle of approach. Let's take a look at what that means.

That would definitely reduce the spin, but it also reduces solid contact. We need to do both.

Spin is Not Your Friend 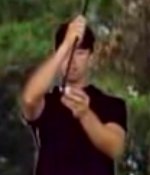 Believe it or not, one of the biggest areas where you lose distance is having too much spin. That's very important, and we're going to look especially at how it pertains to the driver.

The ideal angle of attack is 6-12° of forward shaft lean. In theory, that will deloft the club about 6-12°. In fact, it's not that exact because the shaft actually bows forward just a little bit at impact, as the energy is starts to release.

Most ball strikers will have some forward shaft bend as well, so again, while it's very important that your hands lead at impact, it doesn't have to be so much that you have 30 degrees of shaft lean. That's too much.

You may feel like 6-12° of forward shaft lean is not that much, but that's where you need to be. That's what you'll see in the best ball strikers.

Another thing to watch is that you don't want your divots bottoming out an inch and a half below the ball. That's too deep, and shows that you're coming in too steep. 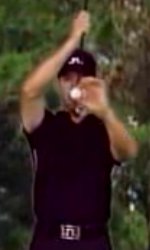 Your divot should not bottom out this low

Ideally, your divots should be very shallow. You can check by looking at the divot itself. If you see a lot of dark soil underneath the ball, your divot was too deep. You basically just want to scrape the layer of turf off the ground, without digging down into the richer earth, which gets darker as you go deeper.

Just taking off that thin layer of turf will give you the optimum balance. You want to see a 1/4-1/2" divot, no more than that. If you're coming down more than that you're probably putting too much spin on the ball or delofting the club too much.

For optimum control with your irons you want a slightly descending blow - about 6-12° of forward shaft lean - and a very shallow divot. If your divots are correct you should be able to practice from the same area, about the size of a shoebox, for about an hour. Your divot should start in front of the ball.

Those are the keys to striking with the irons.

What About the Driver?

Those rules change a little when it comes to the driver. 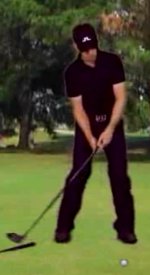 Many golfers play the driver way up in the stance

There's a lot of misunderstanding around the driver. You'll see a lot of golfers playing the ball way up in their stance and teeing it up six inches off the ground in an effort to catch it on the upswing as much as they possibly can.

What's wrong with that?

Imagine throwing a ball. If you were going to throw a baseball as far as you could, would you throw it very high? Very low? Or somewhere in between?

The principles are the same in the golf swing. You need to find the middle ground because there's a point of diminishing returns when you launch the ball too high. You end up with a ballooning ball flight.

Ballooning ball flight is a sign that you're adding too much loft to the face. It puts too much spin on the ball and you end up with a shorter ball flight. 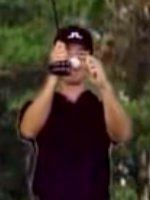 If you look at the pros, you'll see most of them tee up just slightly above the club head. This gives them a shallow angle of attack.

You should get maybe half the ball above the club face, which is exactly what you'll see at any professional golf event. If you come at a drive very steeply you can get a reasonable launch as long as you catch it on the right angle, but there's definitely a point of diminishing returns.

[6:01 just about neutral club angle] Very few of the pros tee the ball six inches off the ground. Granted, some of the longer hitters do - Bubba Watson and those guys have very exaggerated, extreme angles of attack - but that's not the norm. Most of them get a very shallow approach to the ball.

Be an All Around Golfer
If you only ever play in Colorado, a higher launch angle is ideal and you could launch high all the time, but in all around conditions you need a shallower angle of approach and a much flatter ball flight.

This doesn't mean that you want a descending blow either; ideally, you want the shaft and club head to return just about to neutral. Not necessarily descending, not necessarily ascending, just balanced because that will give you the longest, shallowest approach into the ball, which reduces spin the most.

You don't want a steep, descending blow because it puts too much spin on the ball. That's good with the irons because spin gives us control. With the driver the whole point is to maximize distance. We're not necessarily going for the ultimate control. We're just looking for maximum distance, period.

For that you want a shallow angle of approach, with the ball teed just slightly above the club head.

Ball Position - Back to Basics

As far as ball position goes you can go right back to basics. With the irons you're going to have it off your shirt logo. With the driver, just a tad more forward. 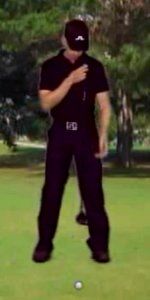 It doesn't need to be a whole lot more forward because typically you're going to have a wider stance, which will also help shallow out your angle of approach. About at your armpit, where your chest muscle meets your shoulder muscle, is optimal.

You'll see a lot of golfers with the ball way forward and the shaft way back. It takes a lot of lateral movement to get the shaft back to a neutral position if you do that.

Get a shallow angle, keep the shaft pretty neutral at address, and as you're coming into impact make sure to stay behind the ball for that shallow angle of approach. See if your distance doesn't improve.

Get Your Free Membership to Watch "Exaggerated Lag | Hands Ahead at Impact" Right Now!