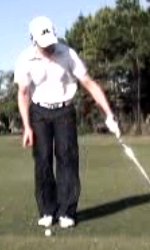 Today we're going to talk about the flat left wrist at impact as it pertains to the Rotary Hitter golf swing.

Keeping the left wrist flat through impact and beyond is critical for controlling the launch angle of the golf ball and the direction the clubface is pointing.

That's our topic for today, and we're going to learn it on little half pitches to start with. It's very basic stuff, but very, very important and critical to master this move by working on the chipping stroke first.

Start out by setting up to the ball and taking a short grip with the left hand. Set the shaft against your forearm and hold it there as you rock your left shoulder back and forth. The butt of the club will hold your left wrist in place, making sure it never bends. 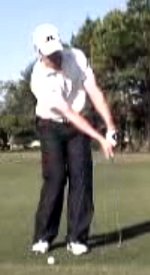 When you move on to hit an actual chip shot, you want to maintain that same feeling. Imagine that the club is still pressed up against your forearm, keeping your left wrist flat.

As you can see in the photo at right, while the left wrist stays flat at impact, the right is bent. As you hit these little chip shots, keep your wrists in these positions so the club never moves past your hands.

The only way for the club to get past your hands would be for your left wrist to break down or your right wrist to throw. Don't let that happen!

Concentrate on the feeling of the flat left wrist and the club head never getting past your hands.

You'll want to put a little more weight on the left side because it's just a little chip shot.

It's very important for the push release - when you're pushing with the right arm - that the right wrist stays bent back. If you start straightening it out, you're flipping it and you'll lose control of the club head and club face alignment.

Adding in a Release with a Flat Left Wrist 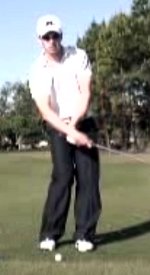 Again, as you're pushing through remember to keep the left wrist flat at impact and never let the club head pass your hands.

Moving on to a slightly larger pitch shot, say 30 or 40 yards, the same thing holds true, but obviously we're not going to swing the club rigidly up into a follow through; that would just hit the ball high.

The club head has to release somehow, but how?

The answer is that the left wrist still stays flat, but we allow it to rotate.

If you look at it from face on, you can see the flat left wrist. The logo is visible on the glove. As you go through, the left wrist rotates, bringing the toe of the club up.

You still never flip it. You never let that left hand break down. Just let the left wrist rotate as you go through.

Let's hit an even bigger pitch shot and do the same thing. 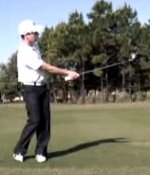 Take the club up to about parallel with the ground on the follow through, keeping the left wrist flat as always. It should go about 15-20 yards farther, and all you did was keep that wrist flat.

Again, the right wrist is bent at the top of the backswing. Take a little chipping stroke, keeping the left wrist flat, and let the left forearm rotate as you come through.

Those are the basics of the push release. Work on this as diligently as you can, always keeping the left wrist flat.

Hit hundreds and hundreds of pitch shots until you're completely comfortable with keeping that left wrist flat. As soon as the right hand starts to break through and release, you're flipping the club and you must never do that when you're learning to become a Rotary Hitter.

Once you're comfortable with the drill, you can move up to half shots.

Get Your Free Membership to Watch "How to Chip - Spinning Chip Shots" Right Now!