Today we're going to talk about the Rotary Hitter backswing plane, and point out some key differences between it and the Rotary Swing.

The takeaway is, of course, the first key to getting the swing on plane because if you do that incorrectly you'll have a lot of trouble with the rest of the swing.

We'll look at some of the most common Rotary Hitter misses when the takeaway goes awry.

Here we see Chuck Quinton setting up for a Rotary Hitter swing with the 5 wood. We've drawn a red plane line from the inside of the ball through the right elbow, and on up through the body. 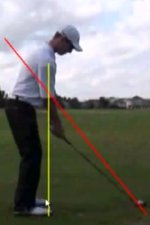 This is the swing plane we're working with on the backswing, and we'll be looking at how he hits that line as he takes the club back. The first key is, again, the takeaway.

In a good Rotary Hitter setup, you get less spine tilt than the Rotary Swinger at address. The Hitter is a little more upright, and of course in the photo Chuck is using a longer club, which also plays into it.

You'll notice that when we drop a yellow line straight down from the center of the shoulder seam, it's out at the edge of the toes, not beyond them as it would be for the Swinger.

This is an important part of getting the club working more up, which is part of what we'll be looking at in the takeaway.

Starting Back - Keep the Toe Up

As the club works back, notice that it's more or less following that red line - the swing plane we talked about. 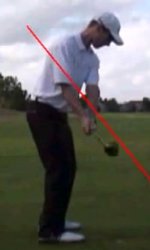 Club works back more or less on line

The first key checkpoint is that the club head is just outside the hands. The club is in a toe-up position. This is critical. In fact, we'd like to see that toe in an even more upright or even open position at this point.

On a Rotary Swing we talk about taking the club a little bit more inside. It's OK for it to work underneath the plane and for the club face angle to match the spine angle, going back.

A Rotary Swinger's club face would be more at the angle shown in yellow in the photo below, because that's about what the Swinger's spine angle would be.

Since this is a Rotary Hitter swing, the club is more or less toe up, and in fact we'd like to have seen it work back slightly more open.

Why is that? It's too technical to get into in this lesson, but the basic idea is that it allows you to keep the club on plane. This is very, very important.

If that toe gets really shut it's going to throw a lot of things off. We'll talk about those issues as we get more in depth in the swing.

For now you just need to understand that as the club works back the Rotary Hitter's left arm will be fairly vertical or angled slightly towards the body, while the Swinger's will angle in, more toward the right heel.

If anything, you want to err on the side of working it open as you go back because, again, the rotation of the club face is what allows you to work the club back on plane.

Check Yourself in the Mirror

Practice your takeaway with a mirror to check these things:

As Chuck continues back, the club works through the right forearm. That's important. Soon after, he finally hits the red plane line. 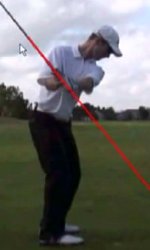 This is a 9:00 position, and as you can see the hands are starting to get more in front of the chest. In a Rotary Swing the hands would be much deeper, farther behind the body at this point.

The Rotary Hitter's hands are more in front of the body, rather than working deep like the Swinger's. This is also very important.

Continuing back we see that the club head is much more square.

The Rotary Swinger can err on the side of being a little bit shut here. That's fine for the Swinger because they're going to be more out in front of the ball and if the club face isn't more square to the plane they'll have a difficult time releasing it and they'll block everything. 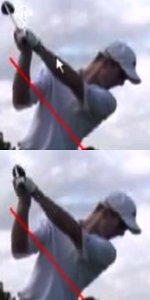 The club head is very square (above), on plane with forearm (below)

That's why those two pieces balance out.

As a Rotary Hitter, you want to release with the arms and hands while keeping the shoulders quieter. You need to be able to release the club face through impact with the hands and arms rather than the body.

If the club face is already shut or square to the plane going back, you're not going to have anything left to release with and you're going to hook it.

That's why it's so important to check this position as you go back.

You want the club face angle and the forearm angle to be exactly on plane, exactly square to each other as you can see here. This is critical.

Finishing the backswing, the club head points directly down the target line at the top.

Coming back down you want to make sure the club face is still coming down square, and your main concern is that you're on plane coming down. 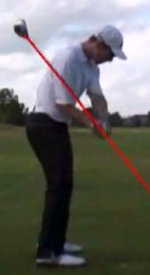 Coming down on plane

You're going to keep the body quieter as the hands work down in front of the body and the club works back down on plane.

Coming down, the club head is on plane through the hands as it works down that plane line.

It's still right on plane coming down into impact. There's a little bit of shaft droop in the photo, but the shaft is on plane. The club head is on plane, and the ball is going to come out exactly down the target line.

To reiterate, one of the biggest keys in your Rotary Hitter swing is getting the club head to work back on plane.

You can use the exact same Shaft Plane Drill we have on the website for the Rotary Swingers because the club needs to get up on plane in both types of swings.

The club head is on plane

Of course the Rotary Swinger can err on the side of going back a little shallower because their arms need to get deeper.

Getting the club head working back on plane is the first checkpoint.

Then of course as you go back into the 9:00 plane you want to make sure the hands are much more in front of the chest.

That's is as deep as you'd ever want to get them, as a Rotary Hitter. 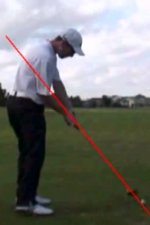 Finally, as you go to the top you want to make sure the club face is square.

Those are your first few key checkpoints. Make sure you're pointing down the target line at the top, and you'll be in good shape.

Work on these initial checkpoints. Use the Shaft Plane Drill to get your club up on plane, keep your hands more in front of your chest, and you'll start to develop a very solid, sound Rotary Hitter takeaway.