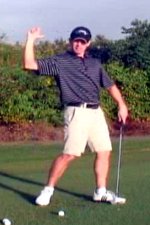 One of the key differences between the Rotary Hitter and Rotary Swinger is the role of the right arm in the golf swing.

The Rotary Swing (RS1) uses both arms more or less equally; we turn the body and come back through with both arms relaxed. It's the body that drives everything through.

There are several differences in the Rotary Hitter, and today we're going to look at two of them; the turn of the body and how the right arm works on the way down.

The Rotary Swing is body-powered, with soft arms. As a Rotary Hitter, when you take the club back your goal is to get into a position where your right arm can make a throwing motion. That's really important for clubhead speed as there is a great deal of leverage created by the bending back of the right wrist and at the right elbow. 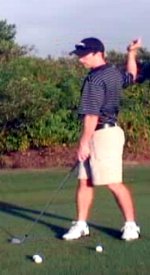 Too far back for a Hitter

Imagine cocking your right arm back like a baseball player getting ready to throw. This puts the right arm in a powerful, leveraged position.

If you then make a full body turn, the right arm is carried all the way back behind you and is no longer in a good throwing position. It would be very difficult to square everything and throw hard with the right arm from back there.

Getting the right arm all the way back is not a good position for the Rotary Hitter.

Look at pros such as Stuart Appleby or Trevor Immelman, who embody the Rotary Hitter type swing, and you'll see that they work to keep the right arm in front of the body.

The reason is, of course, that it's much easier to return the club to square if it's not buried behind the body. 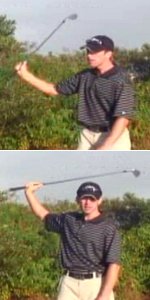 It's similar to the movement of a putt; it's much easier to get down into impact from a slight turn than a large body rotation.

The Rotary Hitter can get plenty of power from a cocked right arm, without the need for a full shoulder turn.

We're going to work on reducing that amount of movement in the backswing to avoid the over-turn of the shoulders that would keep us from getting back to square.

That's the tradeoff. If you want to be more of a Hitter there's nothing wrong with it but you can't make a big, soft, relaxed turn and then try to throw your arms back around really hard. That will just throw everything out of sync and you'll probably end up with a massive hook. 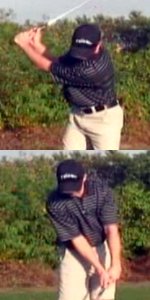 Turn left shoulder to ball & back

The Hitter keeps more weight on the left side, turns the left shoulder down to the ball, and then turns back through. That's it.

A bigger turn than that will make it difficult to square up when the arms and hands are moving fast through the impact area.

Left shoulder to the ball, left shoulder back to address. You've got to keep it down driving through.

While the left shoulder makes that short turning motion, the right arm simply has to work up to the cocked position we discussed earlier. It's going to look very different from the Swinger's right arm, especially from down the line.

It's much shorter and much more compact. The Rotary Hitter should actually feel like the right arm is only making a 3/4 turn.

The more short and compact you can make it, the better. The left shoulder goes down to the ball while the right arm stays more in front of the body. The arm cocks upward and gets into a "throwing" position, then back to address.

The throwing motion of the right arm is key. It will take some work if you haven't done it before. 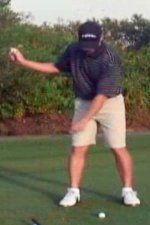 Picture holding a ball in your right hand at address. Imagine that and you're going to take your arm back and throw it at the golf ball or, technically, about four inches in front of it because your hands actually aim in front of the ball at impact.

To make an accurate throw at the ball, you wouldn't make a big turn and shift and pull your right arm all the way back. It would be very difficult to hit it if you did.

For accuracy, you would make a very short turn, bringing the left shoulder down to the ball and keeping the right arm pretty close in and compact to your body.

If you pull it way back and get that flying right elbow it's going to be too hard to hit. Just bring your left shoulder down, right arm cocked, aim a few inches in front of the ball, and throw. That's the motion the Hitter wants to achieve through impact. 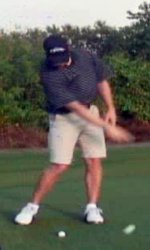 When you get into the actual golf swing you're going to do exactly the same thing. It's that simple.

It's that same athletic motion; left shoulder down, weight more on the left side, right arm in front, throw the ball out in front of you, down the target line. That's what the Rotary Hitter feels like.

It's very different from the Swinger.

These types of positions are perfect for the golfer who wants to really use the arms and hands, really throw through impact and get a lot of dominant motion.

You have to quiet the body a little bit and allow the arms to work into a position where they can be much more consistent and get a lot of speed through impact.

Work on these few things: left shoulder down, right arm in front, "throw" in front of the ball, and you'll achieve a much more solid strike and a much more penetrating ball flight.