As you learned from the "How to Hit a Golf Sand Shot Like a Pro" video, hitting shots out of the bunker is very easy once you learn the few basic fundamentals. But what happens when faced with a downhill lie in the sand?

As you'll see in the golf instruction video, the same fundamentals apply, you simply need to understand a couple more things that will make this sand shot much easier. The swing is the same, only the setup is slightly different. Make sure you stay down through the bunker shot and maintain your balance on the slope. It is important to trust that the loft on the club will send the golf ball up in the air without you having to hit up on the ball.

As discussed in the video, you will want to get your shoulders to more closely match the angle of the slope in the bunker. It will feel like they are steeper than they really are, so don't feel that they have to match perfectly.

Because your right hand is lower on the club than your left, your shoulders will still appear to be shallower than the slope and this is ok. The most important thing is that you set yourself up in a way that allows your swing to naturally work down the slope rather than digging into the sand, or coming up out of it.

You will need a very stable lead leg and very good balance for this sand shot, so it helps to lower your center of gravity by flexing your knees a bit more at address and lowering your hips at setup. You can see this in the sequence below. 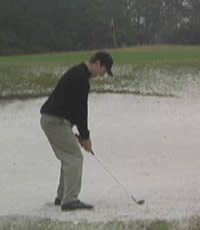 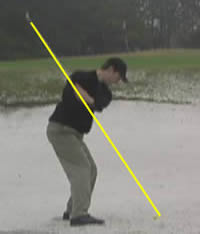 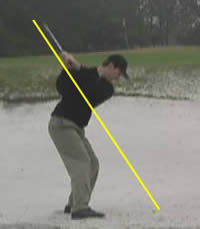 In the beginning sequence above for how to hit a downhill golf bunker shot, you can see in the first picture that I have lowered my center of gravity by squatting down a bit more at address. This gives me the added stability I need to make an aggressive swing without losing my balance on any sand shot.

My arms hang relaxed and naturally at address with no tension. As I take the club back, nothing changes from my full swing. When my left arm is at 9 o'clock, the club is right on plane with the shaft pointing directly at the ball. Note that it appears slightly to the outside because of my open stance.

At the top of the swing, my club is perfectly on plane, parallel to the plane I took at back on. From here, all I need to do is swing down and through the sand with speed. 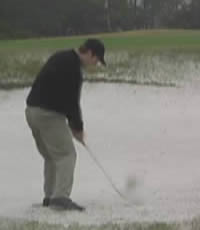 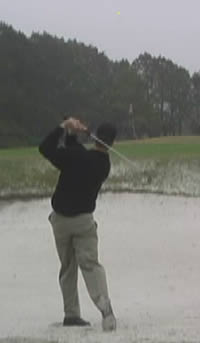 As the club comes down, it still follows the exact same swing plane as it was swung back on. You may have heard instructors in the past teach golfers to swing the club well to the outside and then reroute back to the inside or vice versa.

But it is completely unnecessary to learn a completely different and manipulative swing for a sand shot. Follow the fundamentals from the "How to Hit Sand Shots Like a Pro" video and simply swing through with speed. You can see in the last picture that even though I am on a downhill slope, the ball still got up in the air very quickly because I stayed down through the shot with an open clubface and "struck the match."

Practice this sand shot and you will master it quickly. It's not only easy, but fun!

The downhill golf bunker shot is one that a lot of golfers are afraid of. It's really not that difficult a shot, but you definitely need to focus on some of the fundamentals that we talked about in the Short Game DVD on Bunker Play, and then know a couple other things to help make this shot a lot easier.

First of all, as we talked about in the "How to hit Golf Sand Shots Like a Pro" video, you've got to have the ball a little bit more up in your stance. You're going to still take the same box out that we talked about, striking the match, all those things. Everything still applies here.

The main key difference that we have to make is that our shoulders, as we're on the downhill slope or an uphill slope, our shoulders need to match the angle of the slope. 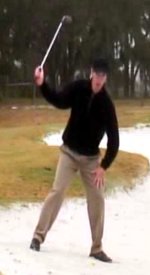 Use a wide, stable stance

If I was on a flat lie, my shoulders would be pretty level, but on this downhill bunker shot lie my shoulders have got to tilt to match the slope. If I didn't tilt, if I kept my shoulders perfectly horizontal then still had my feet, my hips and everything matching the slope, I'd hit the ball very fat. I'd hit way behind it because my shoulders are tilted too far back. 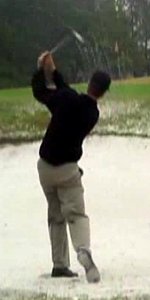 First thing we're going to do is get our nice, wide stance, ball up in our stance. The same thing, we draw the box and strike the match like we talked about, but now I'm going to make sure that I've got a nice, stable base, my shoulders are going to more closely match the slope rather than being horizontal.

I'm going to take the club back, and then slap down on the sand. As you can see, I perfectly took out my block. What I tried to do there was just keep swinging down the slope and letting myself go with the shot.

I don't want to sit back and try and chunk my club in there and leave my shoulders back.

I get my shoulders to match up, swing back, and swing through and match the slope. Let's see what that looks like.