How to Hit Long Bunker Shots

The long bunker shot in the 25-30 yard range is considered to be one of the toughest shots in the game of golf. In truth, it's not that difficult of a shot, it just requires the golfer to make a confident, aggressive swing.

If you follow the fundamentals from the "How to Hit a Sand Shot Like a Pro" video, you will see that there are only a couple things to consider when playing a long sand shot.

First, you must decide on whether or not you play long bunker shots with the same club all the time, or whether you like to use a less lofted club for this sand shot. As discussed in the video, there are pros and cons to both, but essentially, using the more lofted club such as a 60 degree wedge for all your bunker shots will allow you to put more spin on the golf ball and be more aggressive.

Using a less lofted club, anything from a 56 degree sand wedge to as low as a pitching wedge, you can make more of the same swing you would on closer a shorter sand shot, but just let the loft of the club hit the ball the right distance. This is often the easier shot of the two and there is absolutely nothing wrong with playing either way.

Practice both, master both, and then let each particular sand shot dictate what the best play is. The most important thing to be cautious of when hitting ANY bunker shot, especially the long bunker shot, is deceleration.

If you find yourself wanting to play the club with less loft and make the same swing, it's important that you take a club with enough loft that you don't fear that you might have to slow down through the sand for fear of hitting it too far. In this case, take the more lofted golf club and don't be afraid to take an aggressive swing. If you make the more aggressive swing, you should never fear leaving the ball in the bunker.

When it comes to even longer bunker shots, up to about 65 yards, you can still play these as splash shots rather than making contact with the ball. I will personally play a splash shot up to about 70 yards from a fairway bunker with my 56 degree wedge.

On these shots, I follow the exact same fundamentals, but I don't hold the face quite as open and I just make a very aggressive swing. The ball will come out very high with a lot of spin and land softly. Some may wonder why I recommend playing these shots this way rather than just taking a wedge and striking the ball. T

The reason is that 60 yard range is still an "in between" yardage, about a half 60 degree wedge and that is not an easy shot. I prefer to make a full swing and just vary the amount that I open the face of the club so that I can make the most confident and full swing possible. It also gives me the largest margin of error because I still never make contact with the ball.

If I were to try and make contact, I would need to play the ball back in my stance to ensure ball-first contact, which would then lower my trajectory. There is also no margin for error on this sand shot. If I catch the golf ball just a tiny bit heavy, I can be faced with the same sand shot again or another tough "in between" yardage shot. The truth of the matter is, the splash bunker shot provides the greatest margin of error of any golf shot you hit because you never make contact with the golf ball. And in a game that is already challenging enough, the bigger the margin of error, the better.

One of the most important keys to the long sand shot is accelleration. You need speed in this shot and a simple way to check this is at the finish. Note in the picture below that I have come around to a full finish even though I only hit the ball about 30 yards.

My clubface is still open at this point in the golf swing, indicating I have kept it open throughout the shot and into the follow through. Keeping the clubface open allows me to make a full swing and be aggressive with no fear of hitting it a mile past the hole or blading it. The next time you are practicing this sand shot, make sure you come around to a full, balanced finish and you'll have no trouble hitting this shot. 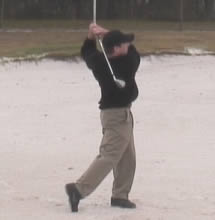 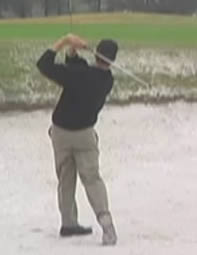 When faced with a long bunker shot - here I've got about a 25-30 yard bunker shot, which is often a very feared shot in the game - the truth of the matter is it's really not that difficult a shot. There's just a couple of different ways to play it, and you need to find what works best for you.

The benefits and fallbacks of that method are if you just make a bigger swing, the tendency is if you catch it a little heavy the ball will just come out about the same distance but with less spin, so it'll release a little bit. It gives you a margin of error. 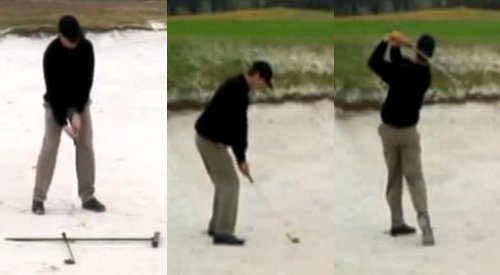 Bunker shot with 60&deg wedge, face on (left) and down the line (center, right)

If you catch it a little bit thin, because you're putting a lot of speed into this swing because you're using a more lofted club, the tendency is for it to hit and actually spin back, so it gives you a little bit of margin of error but it does require more precise swing control in the strike.

The other school of thought is to take a less-lofted club - say out of here your 52 or your gap wedge, or even a pitching wedge - and make the same swing that you make out of the closer bunker shots, when you might use a 60° wedge. You simply don't swing as hard.

But of course because the club doesn't have as much initial loft, even when you open it, it's not going to have quite as much loft as, say, a 60° wedge which I have in my hands here. 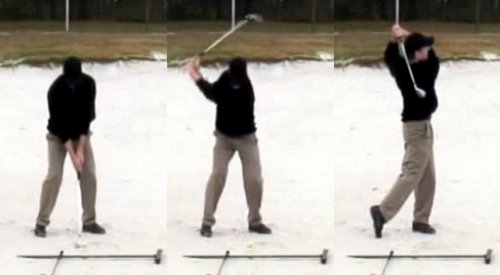 The first shot I'm going to hit is going to be the 25-30 yard bunker shot with the 60° wedge. Here all I'm going to do is open the face wide open. I'm just going to make a very aggressive swing. I'm going to set up to it. Everything's still the same. Lower my center of gravity just a bit.

That one I caught just about perfect; it had kind of a medium amount of spin on it. It spun back just a little bit, but it pretty much landed and stuck. I was able to make a very aggressive, confident swing with it, go ahead and swing through, accelerate, no fear of launching it long if I caught it a little too thin. I hit a good shot there.

I'm going to open it up, same shot. 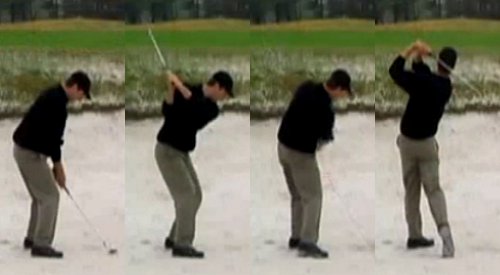 Bunker shot, down the line view

That one I caught really well again, but it had a lot of spin on it so it came back a bit. But I was able to make a more controlled swing with this club, rather than the very aggressive strike that I made with the 60°.

You can change it, by day. I highly recommend that you practice both because it's a great shot to have if you need a lot of spin. If you're feeling aggressive and confident with your swing, to take the 60° wedge and really rip through the shot without any fear of having to slow down or decelerate or make a controlled swing. It's great to practice both.

For most golfers, who don't have a really good control of the bottoming out of their swing arc in the bunker, taking a different club and making the same swing is often a lot easier to do. Practice with your 60° wedge for close shots around the green where you can make a simple, effortless swing.

Then when you get a little bit farther, take your 52 or your 56, or even your pitching wedge and just try to make a more controlled swing. You're still going to open it up. It's just not going to be quite as open. It's a smooth, effortless swing, and let the club do most of the work. 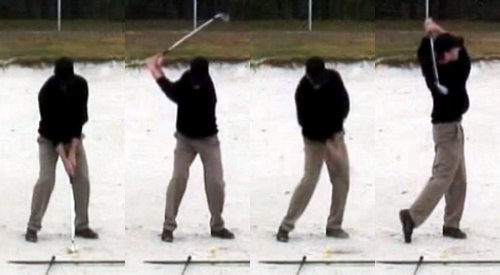