Ben Hogan's concept of the swing plane and his image of a "pane of glass" running from the ball through the shoulders is one that has had a significant impact on the game of golf and golf instruction. Unfortunately, the images from his book "Five Lessons" were a bit skewed because Hogan's left arm never got anywhere near the bottom of that imaginary plane, but the concept is still very important, particularly for one planers.

Study the image below where two shafts stuck end to end represent this imaginary pane of glass at address with a 6 iron. As you can see, this plane is quite steep and I would have to make an exaggerrated movement for my to travel up that plane. 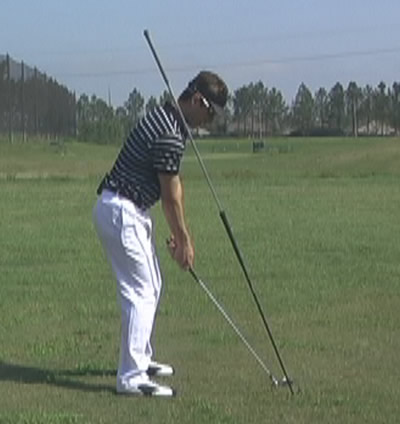 In the photos below, note how my left arm is working down the target line while I keep the club outside my hands in a classical two plane takeaway. 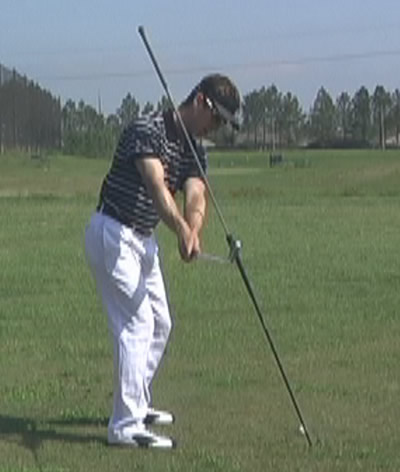 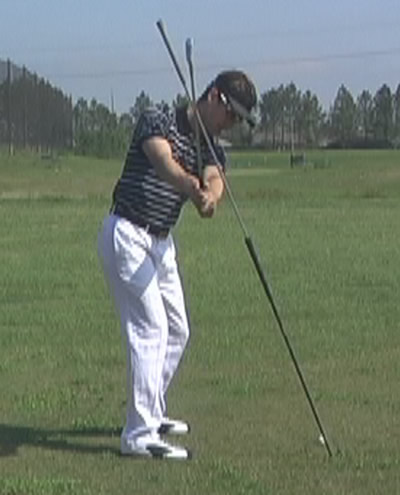 You can clearly see how my left arm is bumping into the plane and my club is well above it at this point, shattering the imaginary pane of glass. Numerous golfers trying to develop a one plane swing end up in positions very similar to this during the backswing and don't quite understand how much more the arms need to work around the body during the backswing in a one plane swing. Now, let's take a look at how the club should work back during a proper one plane takeaway. 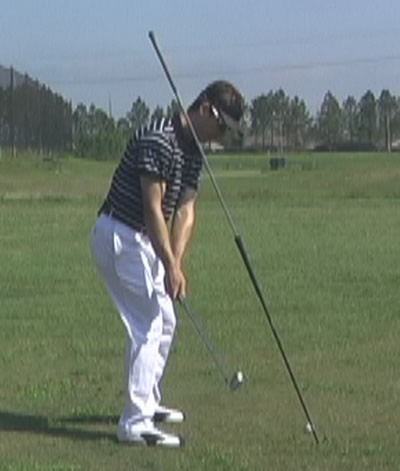 Note how my left arm has worked into my body is starting to swing around rather than up. I've still kept the club outside of my hands, but my hands have worked much more "in." Remember, "hands in, club out." During the next part of the takeaway, note how the club is still outside my hands, but my left arm is working more into my body and my right arm is starting to bend and work the club and hands behind my body. I'm still no where near bumping into the shaft. 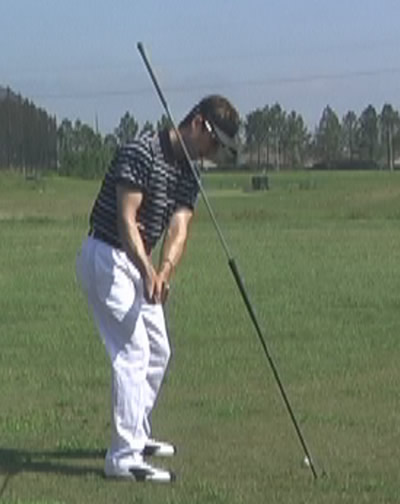 As you arrive at the top, the hands are well behind the body and my left arm is well below the shaft with my left arm and shoulder on the same plane. In a sound one plane swing takeaway, you should never hit the shaft with your arm or go outside of it with the club, on the backswing or downswing. Use this simple drill to check your swing plane on the way back, especially if you have a tendency to get too steep and lift on the backswing with your arms. 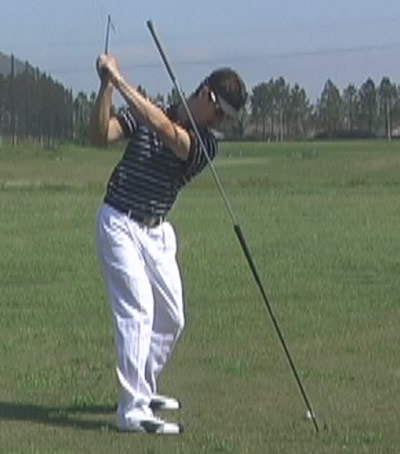 One of Ben Hogan's most compelling images from his book, Five Fundamentals, was this "pane of glass" concept, which I have represented here by these two shafts stuck in the ground. 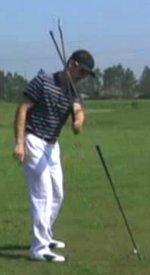 If you go back straight down the line, the left arm bumps the shaft

Then what I've done is I've moved forward and placed a ball just inside the target line so I have room to take the club back. That club, as you look down the line, you can see these two shafts are representing this concept of Hogan's pane of glass.

What's important about this concept, to understand and how it directly applies to trying to learn how to swing your arms more around your body in a one plane swing, is that if you were to take the club back - if you were to set up here, take the club back straight down the line and extend your arms down the line as you've been taught in the classical two plane position - your left arm is going to bump into this shaft.

You can see the only way I can do that is to extend my arms away from my body, work these arms out, and get them up. You can see that my left arm at the top of my golf swing is going to be too steep for a one plane swing. 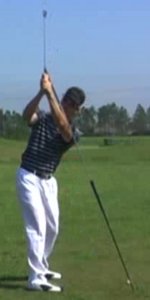 Extending the arms away from the body, you get too steep

My swing is too steep and too narrow in this position, rather than getting the club to work around my body and get my left arm to never hit that shaft.

When working on this, I see a lot of golfers struggle with this who are coming from a two plane swing and what they'll do is perhaps they'll get it working inside OK on the way back, and then they'll get about here and they'll get into this position because it feels like a powerful position to get your arms into this high position where you can leverage them, chop down on them.

Of course in a one plane swing you're trying to swing them more around and get them to whip out in front of you, so this leveraged position that feels powerful for a lot of two planers is a bad thing in one plane because your arms are going to tend to work back in front of your body.

What you need to do to practice this at home is just to get a couple of old shafts. It doesn't matter what they are. You can get them for just $6-7. Stick them end-to-end, place them in the ground just outside the target line on plane with your shoulders, coming up through your shoulder there.

Work on swinging the club around so that your left arm never hits that shaft.

If you look down the line you can see, as I take the club back, my left arm never gets anywhere near that shaft, and the same thing on the downswing. My club and my arm are never going to come into contact with these shafts. 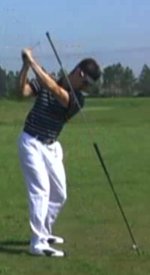 No matter what you're doing, your left arm should never touch that shaft. Work on this drill at home, particularly if you struggle with some old two plane swing throwback moves where your arms are working up and away from your body, getting steep. If you get above your shoulder plane at the top work on getting this drill down so that your left arms turn and are never touching the shaft.

The same thing as you get to the top of the swing; as you come down, you never want your arm to touch that shaft. That'll cause you to throw out over the top.

Work on this drill if you struggle with getting your arms above the plane and this drill will definitely help get your arms swinging more around, on plane with your shoulders, and get you in a more powerful one plane position at the top.

Get Your Free Membership to Watch "Stop Coming Under the Plane in Golf" Right Now!