Neck Tie Drill to Get Rid of Reverse Pivot 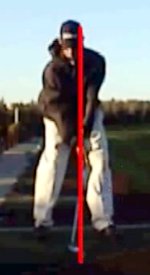 Today we're going to look at a swing by one of our Forum members. You can find this swing in the Member Uploads section of the Members Vault, in the 11-20 handicap golfers.

We can see a lot of interesting things in this golfer. He has a lot of flexibility, good athleticism, but he's making a couple of common mistakes, so let's look at what they are and how to correct them.

A lot of golfers take the advice that we give - things like staying centered, turning the left shoulder down on the backswing, keeping the weight on the left side, etc. - and kind of overcook those things.

We'll start by looking at the face on position. We can see in the photo above that our golfer has very good fundamentals at setup. 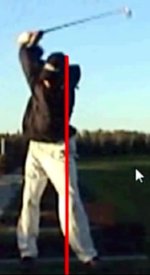 A couple little things may be off, but overall it's a fine setup position. We've drawn a red reference line straight down from his head at setup.

Notice that he does a great job of keeping his head on that line as the club goes back. This is something we've talked about in other lessons.

Watching this swing on video, your first impression would be that he's done really well at keeping his head on the line.

However, notice that he's done it by putting his body in a Reverse K position - the opposite of what we typically teach in the golf swing.

Of course as a Rotary Swinger you know that you don't need to get a dramatic spine tilt away from the target for the classic Reverse K position, but we don't want a K going in the opposite direction either.

A kind of Inverted Y would be a better look, or even a slight Reverse K.

Our golfer appears to be staying very, very centered, but you'll notice that he doesn't let his head and body rotate properly going back.

As a result his right hip starts to bump out, away from the target. This puts his body in a very weak position and, as we'll see shortly when we look at it from down the line, it also changes the arm plane significantly.

What's happening here is that, instead of continuing and letting his mass turn around his spine, the golfer has moved the spine itself. 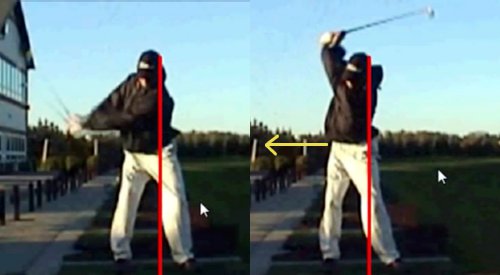 The hips bump out, away from the target, on the backswing

Your spine runs down your back, not through the center of your chest cavity. When you rotate your body around your spine, technically your chest and head will both move slightly around to the right as you go back.

It's not a big movement. It's very minimal - in fact, it won't feel like you're moving at all - but there will be some motion because your spine is located at the back of your head and chest, not down the center.

Check Your Position With a Necktie 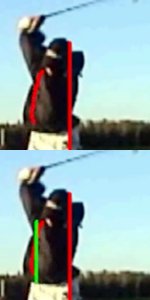 A necktie would drape over this golfer's chest (above), but should hang straight down (below)

It's simple to check your position. Imagine you're wearing a necktie - or better yet go ahead and put one on! The necktie should not drape across your chest at the top of your swing.

If the golfer in these photos were wearing a necktie, it would hang against his chest, as shown by the red line in the photo at right.

If you're in proper position at the top, your necktie should hang straight down, away from your body, as shown in green.

It should just hang loosely from your neck, pointing at the inside of your right knee. It should not lie draped across your chest.

That is a very common fault we see when golfers let their hips bump out that way. Grab a necktie and take a couple of swings and you'll know if you're rotating properly.

Down the Line View Shows All

Looking from down the line, we can see some of the problems this creates.

Our golfer gets good posture at address. He's sitting out over the heels a little bit too much, which can contribute to that position at the top, but overall things are pretty good.

He takes it back a little bit inside and then, because he's trying to keep his spine and head in position in a way that his body really isn't designed to work, his head starts to dive forward as he goes back. This is a very common problem. 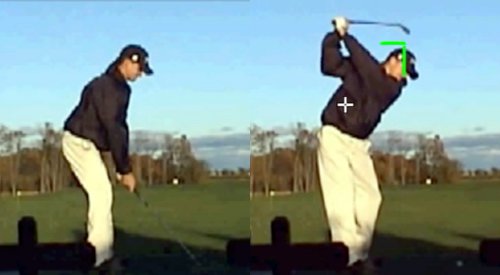 Down the line view shows that the head dives forward

Now his hips are bumped out, just as we saw above. They're in a weak position and of course he's getting way across the line at the top.

It's all because he didn't rotate properly in the backswing, and it all goes back to the simplest fundamental, that's been on the website from Day 1. 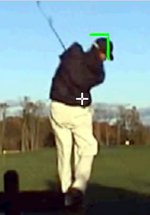 Hips move into the ball

The Body Drill has been posted since the very first day the Members Vault section went live. Along with the Rotary Drill, the Body Drill is probably the most important part of learning the Rotary Swing.

Those two simple drills get everything done for you, but if you don't do them correctly you won't swing correctly either.

As you can see at left, our golfer has gotten himself into a stuck, weak position. His hips move into the ball and he stands up through it, and again it's all because he didn't rotate properly.

How it Should Look

Here's another swing, showing what a proper turn looks like. We refer to this swing a lot because it demonstrates the simple things correctly, and that's our purpose - just doing the simple little things in the golf swing the right way.

The camera angle is slightly off on this swing, so the ball position looks like it's farther back in the stance than it is. Chuck is set up slightly closed here to hit a draw.

Notice that as Chuck turns back, he rotates around his spine, avoiding that awkward kinked position.

Again, because the spine runs down the back of the chest, not through the center, the head will move slightly away from the target. 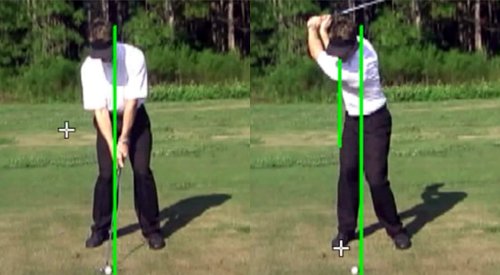 Chuck demonstrates proper rotation - if he had a necktie, it would hang straight down

If Chuck were wearing a necktie, it would hang straight down in the photo at right. The only way it could drape across his chest would be if he arched his spine back toward the target, which would be an uncomfortable and unnatural position.

You can see a very, very minimal Reverse K position, or a slight Upside Down Y position that allows the necktie to hang straight down. It does actually hang down on the inside of his right knee, although the camera angle makes it appear to be outside the knee. 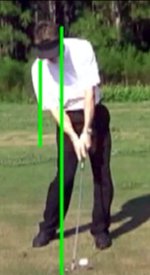 This is proper rotation. Notice that Chuck's hips don't slide as he takes the club back. That slide is simply an instinctive counterbalance move that your body makes.

Your body will do everything it can to not fall on its face. It's not a conscious move; when your hips start moving right, your head is naturally going to move left.

With everything moving correctly, the hips stay in position and your head just moves very slightly because it's turning around your spine.

That allows you to use your hips for power on the downswing and come from the inside properly.

It all comes down to the Body Drill. Do the Body Drill correctly and you'll be all set. Grab a necktie and check your position at the top. If you see it hanging down just on the inside of your right leg, you're in great shape.