Taking the club back on too shallow a plane is perhaps the number one most common fault I see on a daily basis with most golfers learning a one plane swing. It puts the golfer in a very deep and around position where the clubhead gets too far behind the hands and the club never works up on plane.

A very simple drill to check this is the Shaft Plane drill. Set two shafts end to end in the ground at the same angle as your clubshaft at address as shown below: 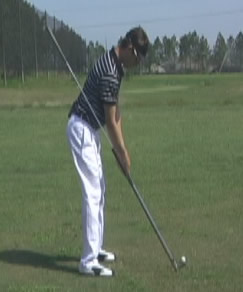 As you take the club back, slide the club back up the shafts until the club reaches parallel to the ground. At this point, the clubhead should still be inline or slightly outside your hands and your left arm should be into your body. 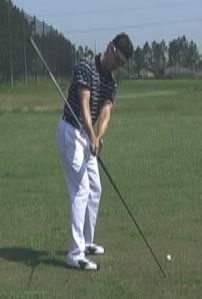 At this point, the club will leave the plane and work up to the top position. But it is the takeaway that most golfers struggle with. So, work on getting the club to start back and up on plane and you will be well ahead of the curve.

Perhaps the most common mistake I see in the takeaway in most golfers learning a one plane swing is for them to take the club too far to the inside. It gets very, very deep around and it gets too flat, too around, the club gets in a bad position at the top, it ends up coming across the line, and they don't see it. 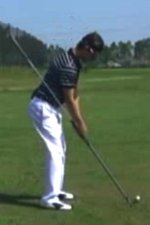 Setup with shafts as a guide

They don't understand what they're doing there because they've heard, "The one plane swing is a flat swing. It's more around," etc., etc. The club still has to work up and down on plane for you to hit good shots consistently.

A great drill for this is for you to place a club - I've got a 6 iron in my hand here - and I've set up to my shot where these two shafts in the ground basically match my shaft plane with my 6 iron at address.

I've stepped back away a little bit, moved the ball right on the target line. Now if you look down the line, the plane of my shaft and the plane of these two that I'm using in this drill are very, very close. 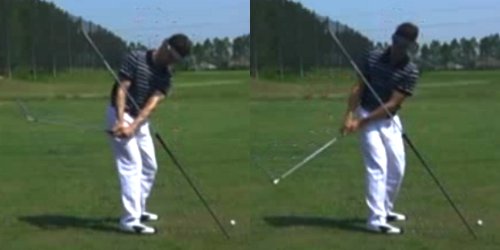 Is this you? Taking the club back too flat (left) & turning too early (right) both get the club too far under the shafts.

It's too flat and too around, and the club face is going to end up wide open at this point. The only other way to do it is if I were just to make a really aggressive body rotation and turn too early and my arms don't swing up on plane. One of those two extremes is what's causing this move. 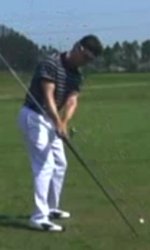 Slide right up the shaft

My left arm is into my body, it's working up that shaft and then I get into a solid position at the top where my club is more or less still on plane or parallel to that plane as I take the club back.

You can also extremely exaggerate the other way, where the club works back too much to the outside. It's way above the plane at this point, and then I'm just going to end up in a two plane position. If you're a two planer, this is a great drill for that, to make sure that you don't ever get the club way back and stuck outside behind you here.

As a one planer, what you're really looking for is to get it to very closely match, as you take the club back, this plane as long as you can, or get somewhat parallel to it once the club gets about to its halfway point, where it's parallel to the ground.

From here it's going to leave the plane. If you looked at video, you would like to see it working right through this right forearm and then get into a good top of the swing position. 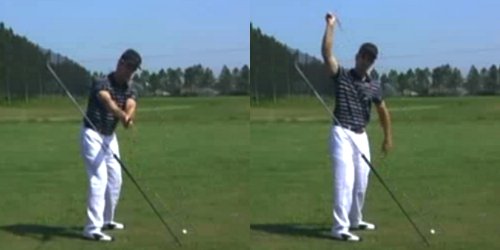 Be careful if you find yourself doing this drill and you're into here and you never come anywhere near that shaft. You're taking the club way back too far inside.

Set these two shafts up, get as close as you can to where you are at address with the two shafts. Make sure you take the club back on plane, and then down through on plane, and your ball striking will improve dramatically.

Get Your Free Membership to Watch "Trace the Plane Line" Right Now!