Paul Dickinson is a professional golfer from Orlando who has played on the PGA and Nationwide Tours. Paul was an all-American in college and won 4 times while playing at the University of Alabama. Paul played through all three stages of PGA Tour qualifying school to play on the Nationwide Tour in 2003.

We look to get Paul back on tour again next year and with the swing changes we have made, he has an excellent chance at succeeding. Below is an analysis of his swing which addresses a few of the things we have changed in his swing to dramatically improve his ball striking.

Paul's address position is very sound and solid for a one plane swing. His arms hang very naturally from his shoulders which can be seen down the line and he has a nice, athletic, balanced posture.

He was setting up a bit closed and drawing the ball a little too much when I first started coaching him; we have since squared him up at address which has straightened out his ball flight.

From face on, Paul has a little bit of shaft lean toward the target at address as he plays the ball back just a touch in his stance, which is fine. This also encourages the draw that he plays. 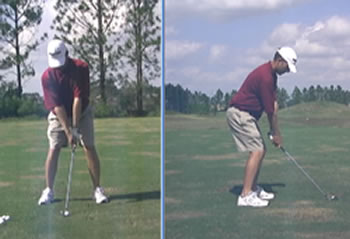 The takeaway is one of the first things we worked on in Paul's swing and is something that we will continue to refine over time. When I first met Paul, he would death grip the club and take it too far inside and under the plane very early in the swing, causing the club to get behind his hands.

This exasperrated his tendency to hook the ball as the right wrist would hinge a little too much on the way back and then release through the shot very aggressively to get the club back in front of him.

Paul is now doing an excellent job keeping the club travelling up on plane and keeping the club outside his hands. He also has much better flow in his takeaway now as he has softened up his arms and hands at address. 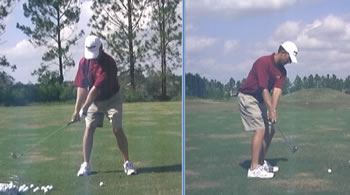 As the club continues back, it is right in line with his hands and close to his right thigh. This is a great position. 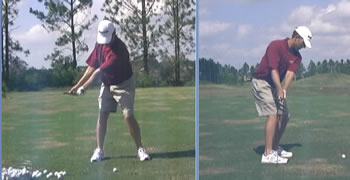 As we get halfway back, paul is in a good position with the club working behind his body and getting set behind him. 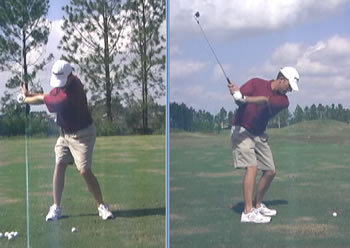 As he gets to the top, Paul has made a big shoulder turn and increased his spine angle slightly. While the club may appear across the line at the top, it is actually pointing down his toe line. 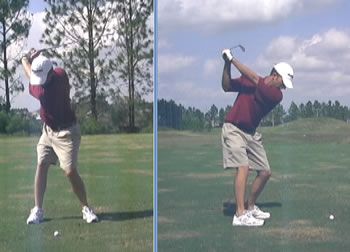 Paul makes a good transition and halfway down has the club pointing at the ball. It is a tiny bit deep here, pointing just inside of the ball, which will cause Paul to swing ever so slightly in to out creating a draw. 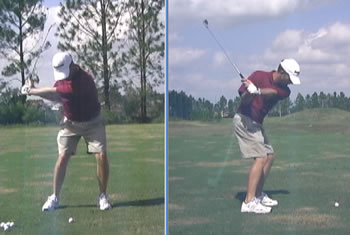 At this point, all systems are go. Paul's club is covering his right forearm allowing him to come in on plane and fully release the golf club with no compensations. 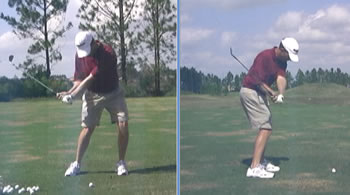 At impact, Paulls shoulders are open to his target line and his hips are well open. He's stayed behind the ball nicely. 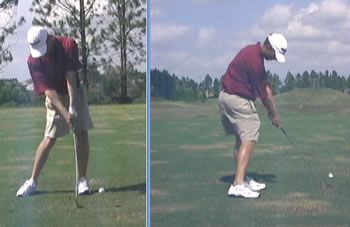 Paul's shoulders through impact rotate right on plane, he has maintained his spine angle and released through the shot. Note how well his head has stayed back while his right shoulder rotates under his chin. He's very flexible to be able release like this.

It's ok for the head to rotate toward the target here, ala David Duval and Annika Sorenstam, but this view is proof that Paul has really rotated his shoulders through the shot and he did not slide into the ball. 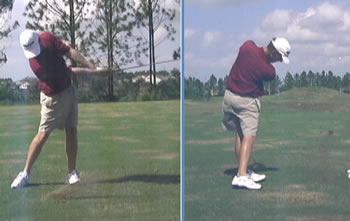 As always, the finish should be balanced and relaxed, with a full release through the shot. There are many things to take away from Paul's swing, but the most important thing to note is that Paul simply does the fundamentals well, as most all professional golfers do. 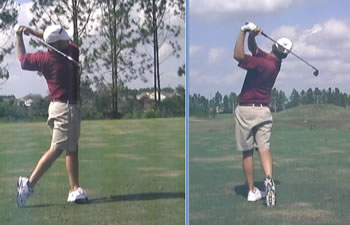