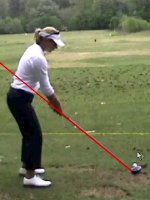 Today we're going to take a look at Annika Sörenstam's swing. A lot of people think Annika is a one planer because her swing looks so simple and smooth and effortless.

It's an easy mistake to make because she has fantastic rhythm, and that's really what makes her swing work so well.

The camera angle isn't ideal on this shot, but we can still get an idea of what's going on in her swing from this down the line view.

As she takes the club back she gets it well above the shaft plane pretty early in the swing, keeping it outside her hands. This is classic two plane.

Butch Harmon was really big on keeping the club wide and above the shaft plane on the way back in order to keep it from getting behind your hands where two plane instructors are afraid it will get stuck behind you. 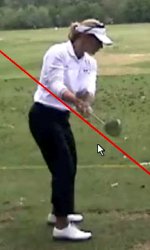 You can see in the photo at left that she's turned back really well in sync, keeping her hands right in front of her chest and the club outside her hands. She's doing a great job with that.

She has a little more right arm bend than you see in a classic two plane position. Most two planers are trying to get a lot of width and extension away from the ball.

The arm bend narrows her swing just a little bit, and gives her a little more control because a narrower swing is easier to control with the body. This is part of what creates the illusion that she might be a one planer, but when we get to the top we'll see that's not the case.

Another reason people think she's a one planer is that she really works to get her arms more in front of her body and uses her body really well through impact.

Great Position in the Backswing

If we take a look at the shaft plane when her arm gets to the 9:00 position we find that the shaft is pretty much right on plane, just a little bit inside. She's just getting a little bit steep, but there's nothing wrong with it.

She's really close to being perfectly on plane. It's a great position, with her hands still pretty much in front of her chest.

Comparing Annika to Chuck Quinton at the same point in the swing we see that Chuck's hands are much deeper back, in front of his right bicep, when his arms are in the 9:00 position while Annika's are in front of her chest. This is a big difference between these two golfers. 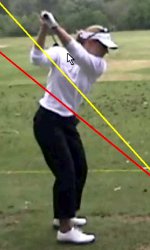 Continuing up to the top we see that Annika gets quite a bit of lift. Her hands are in a good position right over her right shoulder.

She's a little past parallel at the top but she has great rhythm so it's not a problem. If she tried to rotate really hard from this position, she'd be hitting a lot of big slices, but of course she has fantastic control and feel of the golf club and can come down beautifully from this position.

As she works back down she flattens the shaft just a little bit, getting it right back on plane early in the golf swing. This is going to help her shallow it out on the way down.

A Little More Shoulder Rotation Than Some 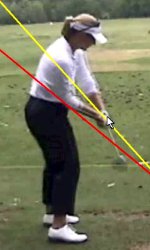 Annika swings down in the classic two plane position, right through the right forearm. It's an excellent position.

One thing she does that you don't see in a lot of two planers is start to rotate her shoulders pretty open as she gets closer to square to the target. She's still got a ways to go in this photo - her feet are lined up a little bit left of the center of the frame.

This is another reason some people say she looks more like a one planer on the way down, because she's rotating her shoulders a little bit more aggressively than somebody like Tiger Woods, who keeps his shoulders closed through much of the downswing and really forces his arms back down in front of his body.

She does the two things a little bit more in sync, getting more shoulder rotation while swinging her arms a little more aggressively on the way down. She's in an excellent position here. 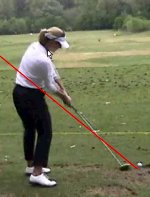 As she comes almost into impact her shoulders are pretty open and just about square with her feet. Her hips are fairly open as well. It's a fantastic position.

At impact we see the telltale sign that she really works to get that right arm straight. This is something we see in almost all two planers - Ernie Els, Tiger Woods, the golfers who really have a lot of release through impact - we see that the toe of the club has to be slammed back shut.

There's no way to have it in that toe up, open position so late in the swing and not release it very aggressively to square it back up on the way through. It requires good timing and good hands to do this effectively.

Annika is very open at impact for a two planer, there's no question about it. She uses her body really well, and of course letting her head rotate helps free up that body rotation as well.

The open shoulder position at impact is yet another reason why it's very easy to mistake her for a one planer, but you can also see that she really aggressively releases that right arm away from her body and works to use her hands to square up the club face. This takes good timing and rhythm, which she definitely has. 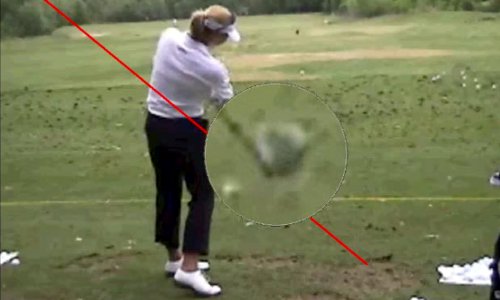 Very, very early in the follow through, the toe of the club is already vertical or even past vertical. You can see in the inset that it's already slammed shut. This is something we see in a lot of Tour players, like Ernie Els.

Some Tour players will have the club face almost looking back down at the ground this early in the swing, with a very, very aggressive release of the club. They can get a lot of club head speed that way. 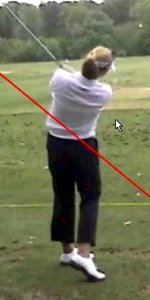 Annika has a fairly common two plane release. In a one plane swing, the club would come much more aggressively to the inside. Here we see the two plane trait of working on a wider arc.

You see the club in more of a toe up position because you're not relying on release with your hands to square up the club head.

This is something Jim Hardy advocates - not releasing it with your hands - so you don't have to fight a hook. Hardy wants you to keep your forearms pretty firm through impact, until the club gets to about waist high or so, then start to release.

At the Rotary Swing Tour we prefer a blend of the two. We like to see the arms and hands release a little more naturally, but both approaches definitely work.

With Annika's two plane swing, she has to release the club head or she'll end up leaving it wide open and flaring everything out to the right.

Her hands are still releasing

She continues to come through in a good position. She's basically on the same plane as the backswing and has a good, full, relaxed release.

You can see that her hands are still releasing the club as she gets into that full finish position she's known for.

Despite the confusion, there's no question Annika's a classic two plane golfer. She just has a couple of one plane traits and tendencies in there that work well with her overall swing dynamics. It's a fantastic golf swing and a beautiful thing to model.

Get Your Free Membership to Watch "Start Downswing Before Completing Backswing" Right Now!