We've had a lot of requests for Tyler Aldridge's golf swing. Tyler is one of Chuck Quinton's students who made it through all three stages of PGA Tour Qualifying School, earning full status on the nationwide tour for 2008. We're very proud of him for those accomplishments.

One of the things I worked on before each round during Qualifying School was keeping Tyler's head from moving both off the ball and back in front of the ball. 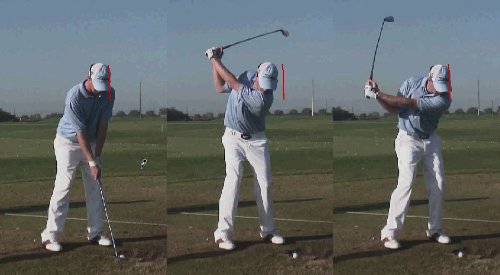 Tylor's head moves off the ball at the top, then back

As you can see in the photo series above, Tyler wants to shift off the ball just a little bit as he takes the club back. It's not substantial, but it's one of his tendencies.

When he first started out with us, Tyler was a pure upright swinger. He had his arms very steep, shoulders very flat in a very arms-dominated swing, including a big shift off the ball.

Of course, those tendencies don't go away overnight, but we flattened out his swing, got his arms on plane at the top, and got the club going back more on plane.

Now we're working on continuing to take this little bit of head movement out so he stops missing the ball to the right. If you shift off the ball and then drive forward and get back in front of that line, when you start to come back down you'll have a tendency to want to shift right back out in front of it. 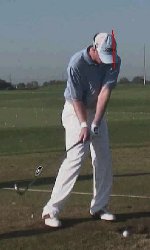 You can see the shaft starting to bow forward in the photo at left. That's pretty typical of someone who goes a little bit too hard from the top with the shoulders and gets out in front of it.

When this happens, the club will start to release a little early, you'll start to lose some lag, and as the head moves farther out in front of the ball it becomes more difficult to keep the ball coming out on line.

He gets a good impact position and goes on through to a big, full release, getting just a little bit out in front of the ball. That's something we're working on.

Down the Line View 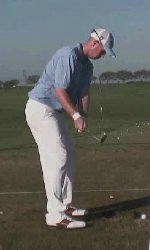 The club is outside his hands

From down the line you'll see Tyler has good spine angle and good tilt at address. His arms and club hang just below his shoulders; it's a very relaxed setup.

As he goes back, one thing he has a tendency to do is take the club a little outside and a little steep, getting the club well outside his hands. Unfortunately, this contributes to his tendency to get out in front of it and hit the outside of the ball.

We had him focus on a spot on the inside of the ball, to make sure he wasn't taking it outside and pulling it or hitting little pull cuts. This helped him strike the ball a lot more solidly. 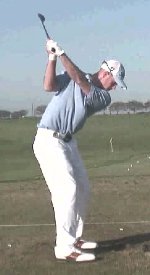 The club is just a little steep as Tyler continues his backswing, but he gets into a great position at the top.

You can see the classic Rotary Swing position in the photo at left. He's got the right arm just about vertical, the club face pretty well on plane, arms and shoulders on plane, good spine tilt, great shoulder plane going back; everything's in really good shape.

As he comes back down he makes a good transition move and gets the club back down on plane and into that position we talk about so much, with the shaft through the right forearm.

He's in a great position to hit the ball and, indeed, he gets into a very good impact position. The ball comes out perfectly on line and the club works to the left immediately after contact. 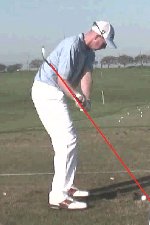 His lower body stays under control and stacked, without spinning out. He's got a solid base and doesn't let that right heel spin up or come off the ground too early.

It's a very good, controlled impact position. As he comes through the club works really hard to the left and the ball comes out perfectly on line.

This session was the fifth stage at Q-School. It was one of the days we did the most work on his swing before the round, and he hit 17 of 18 greens and all 14 fairways, so it was very productive. We look forward to a lot more big things from Tyler Aldridge.

Get Your Free Membership to Watch "Head Moving off the Ball" Right Now!