When needing to get the ball up quickly, say to hit it over a tree, or when needing the ball to land extra soft on an extra firm green, you can make just two adjustments to your one plane swing and get the desired results.

The first thing is the ball position. It should be moved up slightly forward in your stance, generally no more than an inch. Any more than this and you will be required to make compensations in your swing to hit the ball, such as sliding your hips to get to the ball. You also risk not making solid contact.

The second thing is you must release the club with a rehinge of the left wrist. This adds loft to the club through impact which will make the ball launch much higher and continue to climb.

There are two important observations to be made here. First, is the launch angle. While I hit both these 6 irons the same distance, there is a significant difference in launch angles, with the one on the right coming out much lower.

Second, the low shot has traveled much further at the same point in the swing, about 28" more and with 3 mph more ball speed. So how to two golf balls travel the same distance when one is traveling at a higher rate of speed?

So, that begs the question, why not just hit it higher all the time since you don't have to hit it as hard and get it to go the same distance? In one word - wind.

At times, you will need all three shots, low, medium, and high to score your best in all conditions. Master these two shots and add them to your shot making arsenal to play your best under any circumstance.

When we need to hit the ball higher than normal, say for instance with a normal iron shot - I've got a 6 iron here and I need to hit it 10-15 yards higher than I normally would - I need to make a couple of adjustments to be able to hit that shot. 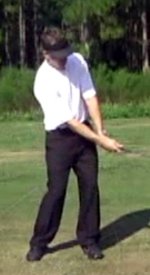 What I need to do first is move the ball up slightly in my stance. My normal ball position for a 6 iron would be about here. I'm going to move it up just slightly; maybe 1/2", 3/4" max.

What I'm going to do then is make my normal full swing. When we talked about hitting the shots lower I made more of a compact, 9:00 to 3:00 swing and controlled it more with my body, and that kept the club from releasing through impact and adding loft to the club face. 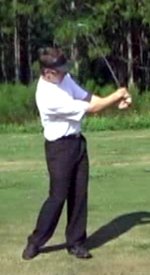 Now, in a normal golf shot this is a terrible thing to do. It's not how you would want to hit a normal shot, but of course this is a specialty shot. We need to hit it very, very high to get over a tree very quickly, or something of that nature.

To do that, all we need to do is add loft to the club face. What I'm going to do is actually release the club more so than usual. Rather than coming in here and releasing everything this way and letting everything rotate over a bit, I'm going to release imagining that my wrists are rehinging after impact.

What that's going to do is, coming into impact, I'm going to have more loft on the club face. Rather than being here, where I've turned the 6 iron into a 5 iron, maybe here I'm going to turn the 6 iron either into a its true loft or even a 7 iron to hit it higher, but of course the length of the shaft is going to allow me to hit it a little bit farther than normal.

Again, I'm going to move the ball up just a bit in my stance, just a small amount, and then through impact I'm going to really release. You'll see in my finish I'm going to have a very, very full finish. 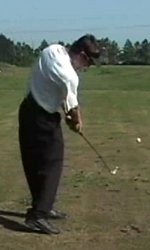 Down the line view

I hit that ball very, very high for a 6 iron. It's about the normal distance, a little bit shorter, but the ball went straight up, it came out straight because I released the club head square through impact, and went very, very high.

Again, move the ball slightly up in your stance, make your normal full swing and then really release through impact to get that left wrist rehinging. Everything is swinging through, adding loft to the club head.

Go ahead and swing around to a full finish and that will hit the ball much higher than your normal trajectory shot.

Get Your Free Membership to Watch "Day 4: How to Hit the Draw" Right Now!