Welcome to Day 2 of the "9 Days to Amazing Ball Striking" lesson series. Today you're going to learn exactly what you need to do in order to hit a draw. We'll give you step-by-step instructions and walk through the whole thing.

If you struggle with slicing the golf ball, this lesson is exactly what you need to fix that. The first thing we're going to talk about is what, exactly, causes a slice or a draw.

Day 2: How to How to Hit a Draw Shot in Golf - Two Factors

There are two factors that determine whether you're going to hit a draw or a fade. 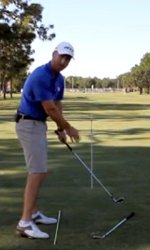 If the face is square to the direction of the swing, the shot will go straight

Then you switched and got the club head to move to right-to-left so the ball would start to the left.

The direction of the club head's movement is the first factor. The second factor is which way the club face is pointing.

As you're swinging out to the right, if your club face is square to that line of movement - if it's pointing the same way the club is moving - then obviously the ball will go straight out in that direction.

You swing to the right, you keep the club face square to the direction you're swinging, and the ball starts to the right. That's what we were doing on Day 1.

How to Hit a Draw - Club Release

Today we're going to modify that second factor. You're going to roll the club face closed. The club head will still be moving to the right, but the face will now be pointing to the left, toward your eventual target. 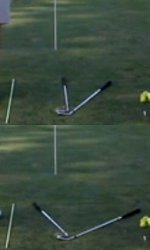 The larger the V, the more your shot will curve

If you're trying to hit a hook and you want a lot of curvature on the ball, you need to roll your hands to get the club face very closed in relation to the direction the club head moves.

The bigger the difference, the more hook or fade or slice you're going to get on the golf ball.

Now that you know what you're trying to do; let's look at how. 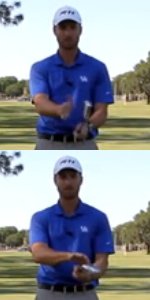 Start by picking up a club with your left hand, using your normal grip. When you hold the club up in front of your body the face will be straight up and down.

Now just turn your left wrist counter clockwise, as if you turning a doorknob to the left, until the face is parallel to the ground. That's it. That's the release.

When people say you need to "release the golf club," this is what they mean. Many students get a little confused about release because they imagine flipping the hands or rolling the arms or something like that.

All we mean by release is just turning your wrist counter clockwise. You'll see that what this does is to close the club face.

It's very important to take your normal grip for this exercise. Don't get a really strong grip or rotate your hand over to the right. It's true that would allow you to really roll the club over, but it's not what we're after with this drill.

What is a Neutral Grip?
If you don't know what we mean by a neutral grip, go over to RotarySwing.com for step-by-step instructions.

Just take a nice, neutral grip. That way you'll be closing the club face by rolling the wrist and releasing the club correctly.

Do 20 rotations. Start with the club face perfectly vertical and roll the club face counter clockwise until it's facing the ground. Do 20 reps of that and you're ready to move on to the next step.

For Step 2 you're going to make some mini swings into an impact bag, with the left hand only. 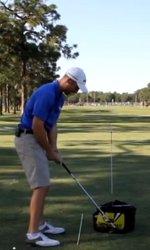 Hit the bag with the toe of the club

Get that same rolling motion with the wrist as you come down to impact so you hit the bag with just the toe of the club.

Really roll your wrist as you come down. You should be turning the club 90° to the left.

This would obviously be a terrible golf shot if you were actually hitting a ball. We're over-exaggerating the movement so you learn what it should feel like as you come through impact.

Really let that club release into the bag. Do 20 reps, just like you did with the rotations in Step 1. 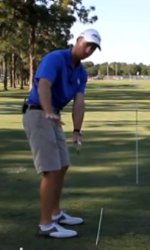 Swing to about waist high

Once you've got that movement down you can start to make a little more of an actual swing.

Again, with the left hand only, swing back and through to about waist high.

Get a full release as you swing through. The face of the club should be pointing straight down toward the ground at the end of the swing.

Really close the club face through the impact area. If you did this while hitting a golf ball you would hit a giant hook but, again, these drills are purposely exaggerated to give you a feel for the movements you will be making. 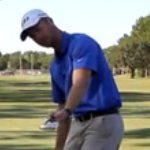 The first step is to learn what it feels like to hit that giant hook. We'll tone it down a little later in the lesson series.

For the sake of this drill, we just want the ball to curve right-to-left. We're not concerned with how much it curves. If you get a ton of curve, that's great. You'll learn how to get it under control soon.

Now you're ready for the full drill.

This drill is set up the same as the exercise we did in the Day 1 lesson.

For today we're only concerned with getting the club to swing from left to right so the ball starts to the right of the stick, and adding the wrist action you've been learning. 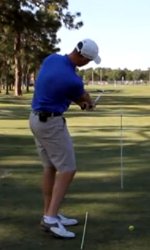 For the first couple of shots, make sure your feet, hips and shoulders are square to the target line like on Day 1. Let the club swing left-to-right and roll your hands just like you've been practicing.

If you swing to the right, like we did on Day 1, and roll your hands to the left like you've practiced in these drills, you'll be able to get your ball to curve from right to left.

Start out hitting smaller 10-15 yard shots and gradually build up your speed. As you get better and better, you'll eventually start making full swings. 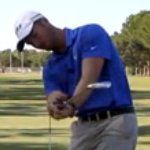 Keep working on it until you can make 20 full swings and get the ball to start out to the right and then curve back to the left.

Remember, it doesn't matter how much it curves. It could curve 2 yards or 20 yards; as long as it's curving from right to left that's all we're concerned with for now.

Swing to the right, let your hands roll, and get that ball to curve back to the left. Practice this drill, and we'll see you tomorrow for Day 3.