Every golfer wants to know how to create more lag in his swing to hit the ball farther.

With this one simple drill, I guarantee you'll have more lag in 5 minutes than you ever dreamt possible. 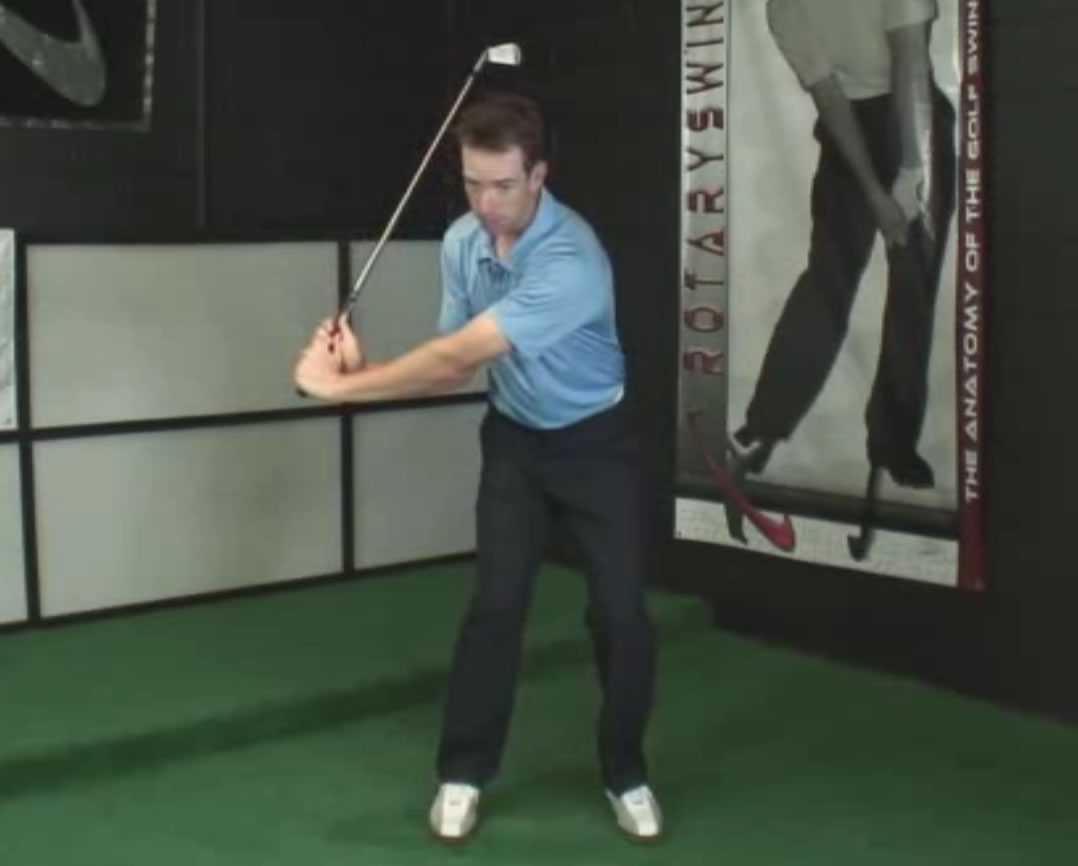 You can create lag like this using the simple Downcock Pump Drill covered in the video.

All the work you've done incorporating the instruction in the preceding RST videos and articles should be putting you in a consistent impact position resulting in penetrating golf shots.

But it also should have set you up to increase your swing speed while using less effort than in the past.

How? By ensuring you sequence your swing correctly, which creates lag like you see in all powerful golf swings.

If you are still "casting" the club and losing your lag, like you see in the pictures below, here's a key principle you need to understand that will help you get over this hurdle: 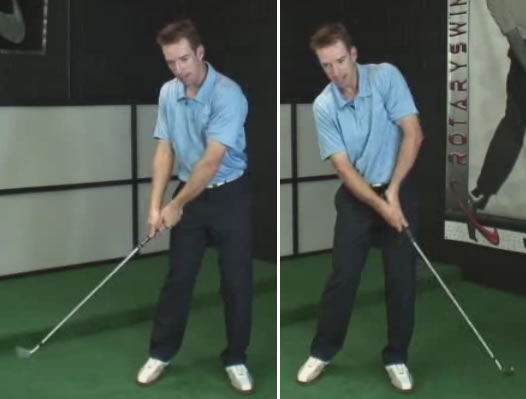 Casting is common because most golfers try to move really fast at the start of the downswing in an effort to create speed. Ironically, that's how you destroy it!

Rotating your shoulders and upper body fast at the start of the downswing feels powerful because it creates a lot of centripetal force.

However, that centripetal force has an opposite effect called centrifugal force, which forces the club head to move and release away from you too soon, destroying your lag.

So, the less you spin your shoulders at the start of the downswing, the more your club head stays lagged, waiting those crucial few hundredths of a second longer to release.

You'll see this principle demonstrated in the video and then learn the Downcock Pump Drill, which will help you slow your transition and increase your lag at the same time.

Check out the video now because the drill's incredibly simple and will change your game forever, especially if you're a club caster! 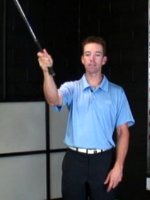 One of the most common and frustrating experiences for golfers is losing power. As they come down in the swing they lose their wrist angle. We call this "casting" - similar to how you would cast a fishing rod. The last thing you want to do in the golf swing is cast it.

As you start down, what most amateur golfers do is they throw the club right from the top so by the time they get to impact the club head is passing their hands. You get a lot of chicken wing action if they're really right-side dominant. They're scooping the ball. They don't ever take a divot, they hit the ball really high and it doesn't go anywhere.

What you need to realize is that lag is the most important part of the golf swing. Everything that we've done to this point in building yourself a proper backswing, proper setup, learning impact alignments, is to make impact more consistent and controllable, but also to give you more power by teaching you how to maintain lag. 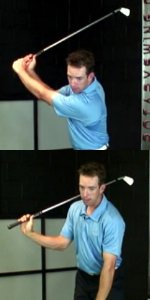 Sequencing is everything in the swing, and we're going to talk about the first piece of that sequence, which is the Downcock Drill.

As you get to the top, what I want you to do is go to the top, pause. Just stop right at the top, loaded up on the right side. Then as you're shifting over to the left - not pushing off the right - using your left leg, I want you to take the club with both hands. Let the right hand feel like it falls back on itself and the club is going to hit you in the shoulder.

It won't actually hit you on the shoulder unless you lighten up your grip. You should be holding the club pretty softly at this point anyway, but not so much that you let go of it.

If you do this drill correctly you should be able to bring the club in within a few inches of your shoulder. This is the opposite of "go to the top, push off the right side, pull with the left shoulder." 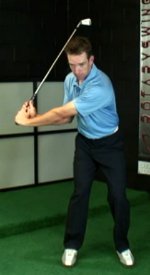 The club is near the shoulder

As you spin your body this way, the club head is going to go out this way so as you come into impact you don't have any lag. There's nothing left to hit with. You have to learn to maintain lag at 60 percent of your club head speed, roughly.

If you come into impact and you have this wrist angle, you're done. You have nothing left to hit with, so you're going to start getting into the scoopy, flippy motion.

Instead, you want to come down into this position, which we'll work on next. What you want to do is start practicing downcocking to start getting yourself in a position where you're maintaining more lag. It's going to feel very different. 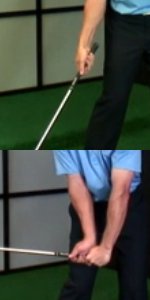 Wrist angle - bad (above) and good (below)

You're not going to go all the way down yet, you're just going to start working on getting some lag to start the downswing as you're shifting over, versus going to the top and start rotating, getting the club thrown out away from you.

It should feel that you start having a lot more wrist angle coming into impact. As you work on the transition videos coming up soon, this will help you really get into great impact positions and start being able to control the ball and compress it, and hit it farther than you ever have before. If you're a club caster, this will change your game forever.