Find Out How Bradley and Dufner Can Help Your Golf Swing

Among other concepts, you're going to find out what you have to do on the downswing based on the "depth" of your backswing.

We keep hammering this point home because it's a vitally important concept. 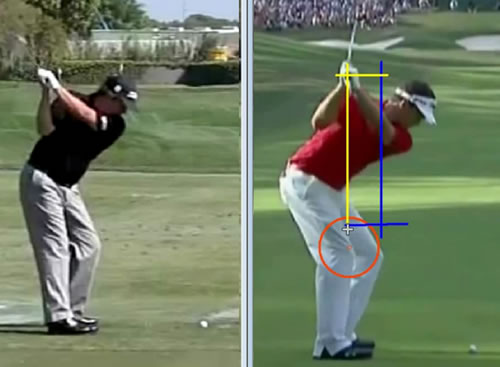 Dufner (left) exhibits a relatively deep backswing. Bradley, with his hands more in front of his chest, keeps his backswing shallow, a la RST. Learn more in the video below!

Dufner, while sporting his unkempt haircut and everyman look, is having a highly successful season. His setup is worth study by the RST student.

In his takeaway move, Dufner rotates his hips, which sets off a string of backswing issues that many RST students encounter.

The free swing analysis video below walks you through those issues so you can quickly identify them in your swing.

Dufner's downswing is a combination of disparate elements and is highly, highly dependent of timing.

Like all swings that are highly dependent on many timing elements, things tend to go awry at the most critical times. It’s no surprise that his crucial misses went right, as tension in the arms prevented his complicated downswing from synchronizing.

Keegan Bradley is a young man with sharp and precise angles and lines in his setup. His extraordinary amount of spine angle at address leads to some unique elements in his swing.

However, Bradley beautifully demonstrates the concept of shallow backswing and “hips then shoulders” into the downswing.

He is a big-hitter, being 16th on the Tour in driving distance. His remarkable lag and arm swing into the ball account for terrific clubhead speed.

Bradley also beautifully models our latest drill, “Squeeze the Cheeks”, as his hips and pelvis are solid at and past impact.

There is much to learn in studying these two swings. Although neither perfectly models the RST swing, there are RST elements and principles on display in both.

Get Your Free Membership to Watch "Dufner vs. Bradley Swing Analysis" Right Now!