As you may know if you read the forums, Chuck worked with TaylorMade Performance Labs at Grand Cypress in Orlando to study certain aspects of the swing. 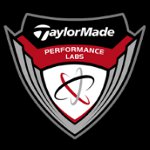 Travis, who runs the facility, is doing some initial research into parts of the golf swing that interest us because they impact so many other things.

One of these is, what is the relationship of hip rotational speed and hand speed to club head speed in golf?

Chuck is particularly interested in this topic because when he was fitted at a TaylorMade Performance Lab in Georgia, years ago, he was told that he moved his hips and hands a lot faster than the average Tour pro.

"Why wouldn't that be a great thing?" he wondered. This led him to discover the importance of the golf swing sequence.

Many golfers don't know how fast their hips should turn, or whether they need to be going that fast at all.

If you turn your hips as fast as you can, will you hit the ball farther? Of course club head speed, and therefore distance, is the bottom line. It's the big payoff in the golf swing.

When we went to TaylorMade to research this question, we discovered something very, very interesting.

We were looking at two things:

Of course you can't stop them completely, but Chuck tried to keep his hips very still in the downswing and use just his arms, hands, and upper body.

Some of you probably swing like that already, while others normally spin their hips out as fast as they can.

Chuck did both, generating a set of data for each swing.

What Did the Data Show?

When Chuck moved his hips as fast as he could, he did in fact generate a little more club head speed.

The speed was about 3% more than when he tried to keep his hips completely quiet in the downswing.

Three percent is definitely a loss, but not necessarily a devastating one.

The side benefit was that Chuck was able to hit the ball more consistently when he kept his hips quiet through the downswing.

Without firing his hips as hard as he could, he gained much more control over his hitting area and impact position - at the cost of a couple miles an hour in club head speed.

The loss in speed would have meant maybe 6-10 yards if he hit the ball equally solidly in both swings.

However, he couldn't do that while flinging his hips as hard as he could.

Hip spinning can cause back pain

More important than any of the stats he generated, Chuck found that keeping his hips still was much easier on his hips and back.

Many golfers have had hips replaced, or struggle with the long-term effects of other injuries or conditions.

The hip is critical in the golf swing, yet spinning the hips is unquestionably a source of strain on the body.

You may not notice it if you're younger or haven't had hip trouble, but as you get older you probably will.

If you fire your hips as fast as you can coming down, the cumulative strain will eventually catch up with you.

The back also suffers wear and tear. When you spin your hips as fast as you can, the pelvis is moving, with great force and speed, much faster than the upper body which puts strain on the spine.

The Rotary Swing Tour works to prevent these issues by teaching you how to use your body safely and correctly, and how doing so will affect your golf swing.

When Chuck tried not to move his hips at all, his rotational speed was approximately 170 degrees of rotation per second. When he moved them as fast as he could, it was 370 - a little more than double.

Net Effect
Cutting hip speed in half slightly reduced club head speed, but improved control and consistency in the swing

In other words, working to keep his hips absolutely still reduced his hip speed by about half.

Cutting hip speed in half cost him a few miles an hour in club head speed, but at the same time he was able to hit the ball more solidly and consistently.

The important conclusion here is that you're not going to lose that much speed by stabilizing the hips instead of firing them as hard as you can.

That means that hip rotation is not the sole factor in determining club head speed in golf.

If you have back or hip problems, not being able to spin your hips very fast isn't necessarily bad for your swing.

You're not going to lose that much speed, as long as your golf swing sequence is correct.

Learing how to sequence your golf swing correctly is the number one most important thing!

Let's Take a Look at the Pros 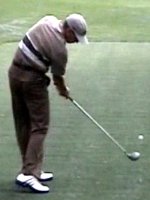 The next thing we did was compare Chuck's data with similar analyses of Tour pros' swings.

We found some interesting correlations.

To begin with, all the pros decelerated their hips coming into impact - every single one, without fail - and we measured some big hitters, including Hank Haney, Sergio Garcia, and Justin Rose.

We used their data as benchmarks for different types of golf swings and different movements, with a range of higher club head speeds. 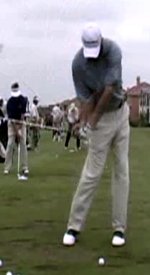 Interestingly, golf swing sequence is what made the biggest difference in every one of our pros' swings.

Their hip rotation wasn't necessarily any faster or slower than Chuck's, at peak velocities.

What was important was that they fired their hips sooner, giving them a more dynamic transition by getting the hips going first and then decelerating.

Does that mean you should try to turn your hips earlier in the downswing and then decelerate them?

Well, yes and no.

You don't necessarily need to intentionally decelerate your hips; that's not what we're trying to accomplish.

What we're doing is transferring kinetic energy up the chain, which is what decelerates the hips.

The Golf Swing Sequence is Key 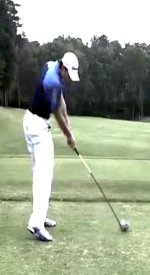 The one quantifiable deciding factor that allowed each of them to produce more club head speed in golf was that their hips fired first, earlier in the transition.

As a result their hip speed, measured in degrees of rotation per second, peaked earlier in the downswing than most golfers.

The higher the handicap, the more evident that difference becomes.

As the pros start down, their hip rotation peaks out very early.

Their top speed is about the same as Chuck's was at impact when he was flinging his hips as hard as possible - about 340-370 degrees of rotation per second - but that speed was reached early in the transition. 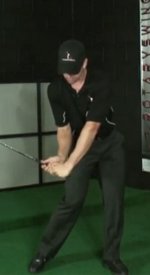 If you fire the hips first, you don't have to do much with the arms

After that peak velocity is reached, everything else starts to catch up because if you move your hips first, you don't have to do much with your arms.

It won't necessarily feel like you're not doing much with your arms because, in terms of sequencing, the arms have to work back in front of the body - they have to catch up.

That's why a lot of people feel like the Throw the Ball Drill is a throw directly from the top.

If you have a good transition and start getting the hips going early, the arms have to start working earlier so in real time you may feel that it's straight from the top.

Technically it's probably not happening until later in the downswing. It's a "feel versus real" thing because everything is happening so fast. 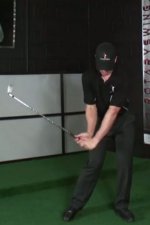 As they go to the top, the Tour pros all transition earlier. You've probably noticed it yourself, and the lab data bears it out.

They do an early transition, their velocity peaks early in the rotation, then they slow down to half that rotational speed and everything catches up for the release.

As the hips decelerate, they pass the rotational energy up the kinetic chain to the rest of the body - the arms and shoulders and hands - ultimately accelerating the club head.

That's the key to the golf swing.

The key to effortless power is firing those hips and transferring your weight during the transition, peaking out that velocity early in the swing.

Once the hips have turned as far as they're going to go, energy starts going up the rest of the chain and eventually reaches the club head.

It All Starts at the Top

Most amateurs struggle with the transition - that's no secret, it's a hard thing to do.

The trouble is they're typically in such bad positions at the top that they don't have a prayer of making a good transition. 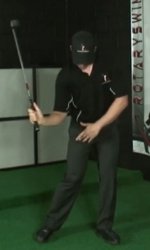 That's why we spend time on the Bucket Drill and those types of lessons.

They help you understand how to get yourself into the proper position at the top, which then allows you to make a good, dynamic, early transition - before the backswing is even completed - so you can get the right golf swing sequence and reach your peak velocities at the right time.

The other important thing is that when you focus on weight shift and early hip rotation, you also get more lag because you're not really doing anything with the club - it's basically just getting pulled down by the movement of your hips.

That's why the pros have so much lag.

Everybody feels things a little bit differently, but the effect should basically be that your arms aren't doing a whole lot until those hips have gotten everything moved over and rotated, then everything releases at the bottom.

We'll continue to research hip speed, rotation through impact, and other aspects of the golf swing.

For now we know the first piece is understanding the transition and the fact that it has to happen earlier and peak earlier, rather than just spinning through the hitting area.

The hips have to decelerate, which can only happen if you start sooner.

That's the key to power. As we do more research we'll be showing you exactly how to drill to get these positions so you can hit the ball farther, with less effort.

Get Your Free Membership to Watch "Hip Speed vs. Hand Speed in Golf Swing" Right Now!