A lot of golfers struggle with overswinging, and it's because they start - and continue - the swing with a lot of arm movement. 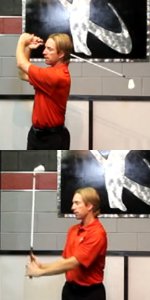 Think of the golf swing like a crescendo. It starts out smooth and slow, then just builds and builds. Whatever you start at the beginning tends to intensify and become more dramatic as you keep going.

This is exactly what happens with the arms. Overswingers start swinging their arms back, with the body just kind of following along.

The body isn't controlling the movement. It's just bracing up to keep from falling over and to allow the arms to swing freely.

How Do You Fix It?

The trick is to load your body first, then let the arms follow along with the movement.

Anyone who's worked with Chuck has heard him talk about "big body turn, little arm swing" in the backswing. When you overswing, you're doing the opposite of that.

We're going to fix it by focusing on your lower body.

You're going to teach your body to sequence things correctly. Once you've gone through and learned this, you will actually be unable to overswing.

It Starts With a Twist

The first step is to twist on your right hip. This is important. 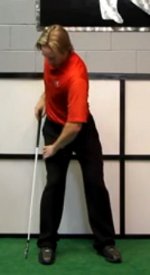 Twist your body on the right hip

You're going to start to load the right glute and right leg early in the swing. Once you're fully loaded up on the right, that's your brain's signal to switch directions and go back the other way.

You've heard it a million times: "The swing starts from the ground up." Now you're going to understand how that works, and how to do it in your own swing.

As you go back, keep your right knee in place. You want to feel that you're just twisting your body on the right hip.

Of course your knee will rotate slightly and move out a little, but when you first start out you need to overdo it and try to feel like that leg really doesn't move at all.

The knee stays still and you just pivot on the hip. You'll feel some strain and stretching in your glutes and your right hip.

Don't hurt yourself of course, but overdo it slightly at first so you learn which muscles are activating and how the movement should feel.

Once you've twisted as far as you comfortably can, stop and observe your position. 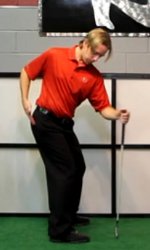 Side view of the twist

Even from just here, you'll look like you're ready to start back the other way. You're in a much more powerful position than somebody who's just swinging their arms around.

The arm swinger has lost all the flex in the right leg. That leg just moves out, instead of staying in position where you can rotate on top of it.

You want to feel like you're twisting on top of that right hip.

It's the same feeling you would get if you lifted your left foot off the ground and turned your body while standing on just your right leg.

Go ahead and rotate on one leg and you'll get that same stretching, loaded feeling. 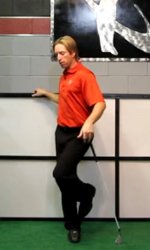 That loaded feeling is your cue to go back the other way. Once that's fully loaded you can't turn any more.

Now let's look at how the rest of it works.

You can start by forgetting about what your upper body is doing at this point. For one thing, it's probably working reasonably well, and for another it's almost definitely doing too much already - that's part of the problem!

Let your arms and torso take care of themselves for now and just focus on the lower body because that's what's causing you to overswing.

Forget about your arms. Your first move is to load into the right glute immediately. That's the very first thing you do in the takeaway.

Forget about what's going on with the club. Loading into the right glute is your number one priority. 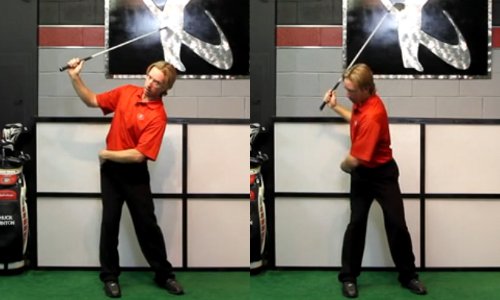 When you overswing, the right hip sticks out (left) instead of being under you (right) where it can support you as you turn

If you feel like you're fully loaded up by the end of the takeaway and you have no other choice but to go back the other way, then you're on the right track.

By the time you get halfway through the backswing, you shouldn't be able to go much farther. You have biomechanically shortened your swing, while creating a proper load in your body.

The first thing you do is twist on the right glute, right away. If you keep going to the top you'll feel like you're still twisting that leg into the ground and there's a limit to how far you can turn. Once you get there, you have to go back the other way.

Twist on the right glute, then keep going - you can't overswing

If you do the opposite - just let your arms swing back without loading the right glute - you won't feel any load, so you won't stop swinging until your shoulders and arms start to feel loaded up and you feel like you have some power. By the time you get there, you're way too far back.

That's the key to the whole overswinging problem: You will keep swinging back until you feel loaded enough - until, subconsciously, you feel like you have power in your swing. If you don't feel loaded up, you're going to keep going until you do.

If you stop before you feel loaded, your brain will tell you that you've got no power and you need to keep going. That's the problem. We solve this problem by exaggerating it a little and loading right away.

What About Keeping the Hips Square?

When you load into the right glute immediately, you'll probably notice that your hips will turn a little bit right away as well. That's perfectly fine; all good players do it. 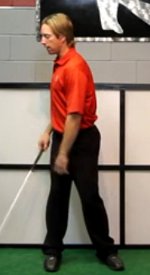 Many golfers turn everything back together - they get no torque

The reason we normally emphasize keeping the hips square is that most golfers let everything go back together and they don't build any torque in the swing.

They don't create any separation between the upper and lower body. They don't properly engage the obliques. That's why we usually teach students to keep the hips square.

But for the purposes of this drill, if you're overswinging, you can turn your hips early and pivot on that right leg. It's fine, because the whole point is to load the lower body early so you can start the downswing earlier.

That loading is the piece you're missing when you overswing. You need a cue to tell you when it's time to move back in the other direction so you can shorten your swing. If you're loading up the right glute going back, you simply can't overswing.

It's a simple thing. Focus on feeling like you're just pivoting on that hip. Load it as hard as you can. Try to load it right away. Once it feels really loaded, start going back the other way and you'll find that you simply can't overswing anymore.