Impact Alignments Down the Line

As I discussed in the video on Impact Alignments Face On, impact is everything in RST. All the work we do at setup, the takeaway, the backswing, etc. is all to lead to tour caliber impact position to produce powerful, penetrating golf shots.

In fact, you can do a lot of things technically wrong in the swing and arrive at a perfect impact position every time and still play great golf.

The key is that all the things we work on in the setup, backswing, etc. make achieving this ideal impact position more repeatable with less effort.

This video goes into detail on the position of the shoulders, hips, hands and club at impact. It also goes into detail how these positions lead to a perfect plane, path and angle of attack at impact that starts the ball on the target line with zero curvature to produce shots that launch low, fly flat and penetrate through the wind with ease. 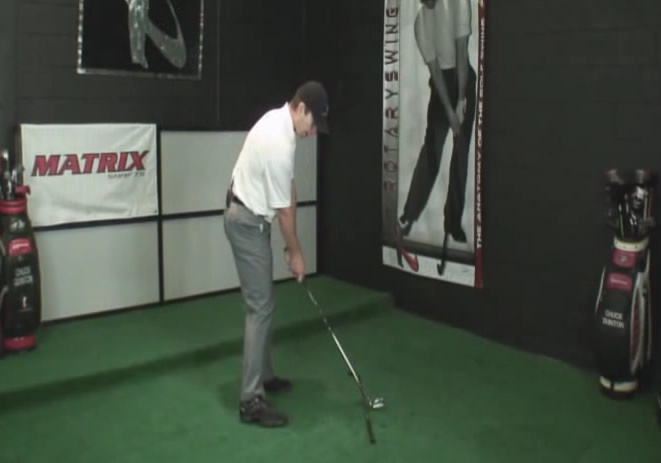 Learn how to achieve this perfect impact position every time and learn the key checkpoints on exactly how to get there in this video and article.

When looking at impact from down the line, one of the most important aspects of RST that differentiates it from RS1 and other swings is the squareness of the shoulders at impact.

Having the shoulders square at impact allows the arms to catch back up at impact which is the easiest way to assure a club that approaches the ball on plane with a square path and descending angle of attack.

As the shoulders get open at impact, especially in the case of "hip spinners", the club tends to drop too far to the inside, leading to a path that is too far from the inside and a very shallow angle of attack. While this is great for bombing drives, the release of the face must be perfectly timed on each swing to draw the ball back toward the target.

The RST swing is designed to start every shot exactly on line with zero curvature on a stock shot. In order to hit perfectly straight shots, the path, plane and angle of attack must match up and zero out and having square shoulders is critical to this.

This video also explains how the "Throw the Ball Drill" is incorporated to help not only get the arms and hands back in front of the body at impact but how it straightens through impact to provide the final burst of speed at the right time in the swing.

If you have struggled with getting the club on plane in the downswing and struggled with a poor impact position, this video will get you moving in the right direction. 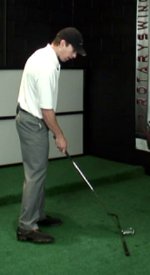 The club should be square to the path at impact

Impact is everything in the golf swing. From down the line, you can see a lot of things that tell the truth about what you've done going back, when you're at impact.

If we do everything right going back it doesn't necessarily guarantee that we're in a perfect impact position, but it makes things a lot easier to get there. Getting there, and understanding what "there" is, is the key.

That's what we're going to talk about here; what are the alignments that you're looking for at impact? What positions? What are you looking for when you look at your swing in the mirror or on video, to put yourself in an ideal position at impact?

Looking from down the line, we're going to talk about what those positions are. There are a couple things here. One, most of this information is going to be geared towards hip spinners because that's the most common problem for members on the website and the students that I teach. 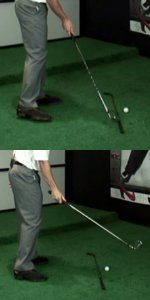 Coming from the inside (above) and outside (below)

It's typically a better player's problem, so if you're not a hip spinner then I'm going to address some things specific to you, but most of this - and I'll point out which isn't directed toward hip spinners - is going to be directed towards guys who really tend to push off the right side too much.

If I'm swinging way from the inside, my club is approaching the ball way from the inside and my path is working this way, way in-to-out. The ball is going to want to tend to start on that line unless I do something with the club face to flip it, to save it, to bring it back around. Obviously, we don't want to do that.

Most higher-handicap golfers are coming over the top so their path is going this way, so the ball is going to want to start left of the target line. 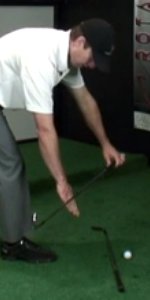 If the swing plane is tilted, it changes the path

What dictates that, a large part, is what the plane is doing. If my plane - imagine the back of my hand here - if my plane is square to my path or if my plane is in this direction, I will come down with a zero degree path.

As I tilt my plane this way, now the back of my hand is pointing this way; my swing plane is tilted, I'm going to swing in-to-out.

When we're doing that, we've got all kinds of problems and we have to really do a lot of work to try and time everything to get the ball to come back towards our target. No need to do that when we can just work on getting everything right and get the right plane and path. 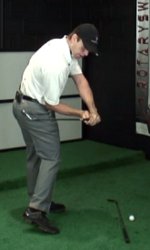 The most common destroyer of getting that path tilted, or the plane tilted so it's no longer here, it's angled back this way, for most better players, is hip spinning. They get to the top of the swing and then the first move down is they fire their hips as fast as they can. Their arms can't catch up, the right heel is way off the ground, hips are way open.

This is no bueno. We don't want to be spinning our hips and then hope to flip the face back the exact right amount to try and draw the ball back to the target line.

What you're going to feel when we look at impact, for most of our better players, most players on the website, as they sit down, coming down in the downswing and they're pulling those arms down, they feel that their hips are very square or even shut in relationship to the target line.

If I match up my shafts here, just putting this across my thigh, this would be square. This is open, and this is closed.

You will feel, if you're a hip spinner, that you are basically keeping this shut - remember the Belt Buckle Drill in the "Hip Spinners" video - you're keeping your hips shut as you come down to give your arms time to get back in front of your body.

Now I can bring the club down on plane, and now as it's on plane my path is square and now I just have to worry about the club face angle.

Now, if you're not a hip spinner and you see yourself usually being square at impact, you need to work on getting your hips to rotate through and getting your hips open at impact, but most of the golfers, again, on the website and the students that we teach don't struggle with that. It's the opposite. 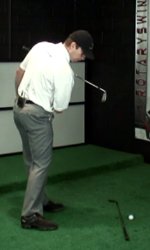 What we're feeling, coming down, getting into impact, this is what you're going to drill at impact, is that your hips are basically square. They'll tend to still be 20-30, even 45 degrees open, but you want to drill that they stay square so that you can get your arms back in front of your body. This is critical.

Now if my arms are back in front of my body, my right foot is just rolling slightly in, my shoulders should also now be square, in relationship to my target line.

If they're very open, my hips are going to be open, I'm going to be struggling coming too much from the inside.

Here's what we're looking for at impact. The right arm should also now, at this point, be almost completely straight. It's straightening through impact, and the release is when it gets fully straightened. Shoulders are square, hips are going to be square, glutes are contracted, just like in the "Impact Alignments Face On" video. That should be impact. 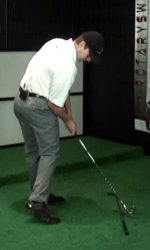 From down the line there's not a whole lot to check here, other than making sure that you're going to drill that your hips are square, glutes are engaged, shoulders are square, right arm is basically straightening.

The opposite of that is going to look like my hips are open, my right elbow is tucked in close to my side and it's very bent, and now I've got to do something to try and save it. Your right elbow should be away from your body - remember the Throw the Ball Drill, getting your right arm to release to get some speed in there - and now we're in a good impact position.

Check yourself in the mirror with those impact alignments and see whether or not you're getting yourself open. You need to diagnose whether or not you're a hip spinner and start working on these impact alignments. You can use an impact bag to do it and it will help you get much better compression on the ball and get you starting the ball on the target line.

Get Your Free Membership to Watch "Golf Impact Position Down the Line" Right Now!