Squeeze the Cheeks — How to Use the Glutes at Impact

The glute muscles (your butt cheeks) are some of the most important muscles in the golf swing. Without understanding how to use your glutes properly, you will struggle with consistency your entire golfing life.

In this video I reveal the SECRETS I teach my better players to stabilize their pelvis, and thus their torso and arms, at impact.

Doing these drills correctly will make your swing almost feel like you're cheating; your quality of impact will improve that much. 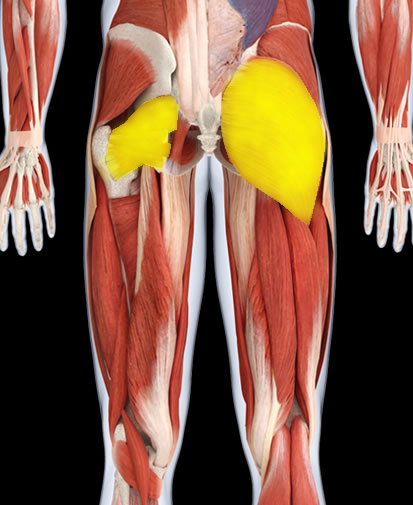 The video teaches you a drill to use your glutes correctly and improve impact.

As the video explains, you really need to feel your glute muscles (highlighted in yellow above) engaged at impact, and you can often tell how much a player is squeezing them by noticing how stable they look at impact.

The pictures below visually demonstrate the differences you'll notice: 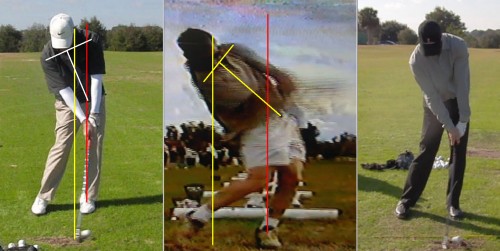 The golfer in the middle severely lacks lower body stability and needs to engage his glutes to reduce his secondary axis tilt, like the other two are demonstrating.

In the middle picture, you can clearly see the effects of the glutes not being engaged.

That golfer's hips are spinning hard through impact, leading to the extreme secondary axis tilt (i.e., spine leaning away from target at impact) and legs that look very "loose."

When you work on the drill in the video and squeeze your cheeks properly, you'll enjoy a ton of benefits:

"This in my opinion is THE best tip yet on getting control of overactive hips and stabilizing the lower body. I am a 6 handicap who has always fought the urge to "fire" the lower body hard towards the target and spin the hips in an attempt to build clubhead speed and it always yielded very inconsistent impact. After trying the "squeeze" from everything from SW to Driver for an hour and a half, what a HUGE difference. Impact was super consistent and the feeling is totally different when you have a stable lower body to swing off of."
-Chris B. | 8/14/11 | Georgia

Check out the video now and feel the stability that comes with mastering the "Squeeze the Cheeks" Drill! 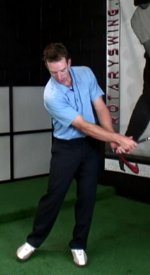 The lower body is stable

Learning how to get into the proper impact position is only part of the key. One of the most important things that the RST is all about is teaching you what muscles to engage, how to align the joints, and what to really feel in the golf swing to make everything correct, and make it easier to repeat, safe on the body, powerful, and efficient.

One of the biggest keys at impact is learning how to engage your glutes, so I use a drill called Squeeze the Cheeks. Long story short, it's not rocket science to figure out what this is.

What you're trying to do at impact is, rather than be in this soft and sloppy position - where your hips are really soft, your legs are really soft, and you can just spin really easily in this relaxed position - at impact you want to have your lower body doing its job in the swing, which is to provide stability. 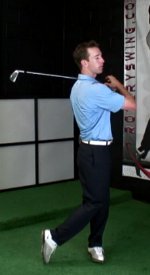 If it's providing stability, certain muscles need to be engaged so that they can support what's going on up top, so that we can control and have stability at impact.

In order to do that, at impact your legs, your glutes, should be contracted. I'm going to exaggerate this drill a little bit, but what I want you to imagine is that you had a penny between your cheeks, and you were trying to squeeze it together as hard as you could at impact, so that when you're here your muscles are activated and now your lower body is really quiet.

That allows you the ability to release the club with some speed and aggression when you need to hit the ball far, or just to have control when you're trying to hit a certain shot.

The opposite of that is for your legs to be relaxed, your glutes to be relaxed, and you'll see that everything just wants to spin through together. I look kind of flowy and loose and soft because my muscles aren't engaged, which are going to keep me from spinning my hips.

Obviously, as I'm moving my body up in the downswing by pushing that left leg into the ground, my glutes are starting to get engaged and I want to squeeze them at that point so I can release the club with a great deal of speed and control, rather than allowing my hips to spin and trying to time all of that releasing at the same point over and over again.

As a simple drill, go and hit a lot of half-shots. Preset yourself into your impact position. You're going to be stacked over the left leg. Squeeze your cheeks together as hard as you can. Then as you come down, just start releasing the club. Keep that heel on the ground - your right heel - on the ground as long as you can.

Then do a couple where you let your legs relax, and you'll feel how you spin. Your ball flight will typically go up because you'll create a lot of secondary axis tilt, and you won't be able to hit the ball as solidly and compress it and feel like you're on top of the ball as much as when you squeeze your cheeks and feel like your hips stop at impact so you can release the club properly. 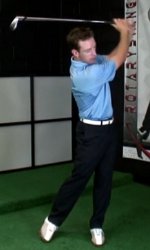 You want to slowly start integrating this into your swing so that as you come down at impact, squeeze the cheeks, release the club, and you'll notice that your right foot will stay on the ground. If you're a hip spinner, this will feel completely different. You'll have a really hard time spinning your hips.

Just stand up with me while I'm doing these drills. Keep your legs really soft, let the club release around; you'll feel it's kind of soft and flowy. Then squeeze your cheeks and release the club with your arms and hands and you'll see your lower body is much more quiet into the follow through.

Work on this drill and you'll be able to lower your ball flight and compress the ball better than you ever have before.

Get Your Free Membership to Watch "Squeeze the Cheeks for Consistency" Right Now!