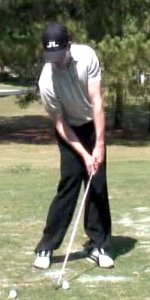 Although the impact positions for one and two plane swings are very different, the fundamentals are actually similar.

In a rotary type one plane golf swing we're keeping our arms more behind and connected to our body.

Because of this, we have to do one thing that's very specifically different than a two plane swing; as we come into impact we have to make certain that while our hands and arms are staying back with our body, our hands are still leading through impact. That's very important.

The photo at right shows the ideal impact position for a Rotary Swing. Notice that the left wrist is flat and this right wrist is still bent back. That's an important piece of the swing

The role of the right wrist in the golf swing is really little more than to hinge back and release through on the downswing. 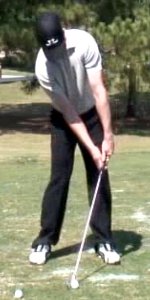 Coming into impact in a two plane golf swing

We don't want that release to happen until well after impact, so as we're coming through the downswing that right wrist needs to stay bent back.

Notice that this brings the hands down in the proper position, allowing the body to just continue to release through the shot.

A two plane golf swing is very different, but the hands are still going to do very much the same thing.

You notice that the hands are leading at impact in a two plane swing. 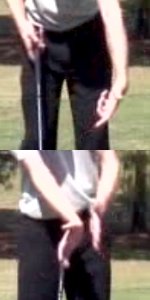 Your hands need to get into the same position either way. The hands do very little in the golf swing, but it's very important to train them to be in the correct position.

The proper feeling at impact is that the right wrist is staying back - not that you're holding it back, just that you're not releasing it through - and that the left wrist stays very flat.

Imagine that you're backhanding the golf ball with the logo on your golf glove. That visual will help you keep a very flat left wrist.

With the right hand, imagine that you're going to strike the ball with the edge of your palm. Don't envision a slapping motion with wrist release, but rather a solid blow with the edge of the hand.

As you come into the Rotary Swing impact position, your hands should maintain that position. They're still very soft, not rigid; you're hitting hard with your body, not your arms, but you still need to maintain that angle.

The right elbow thrusts in front of the body

You should feel the exact same thing in the two plane golf swing. You still want that sensation of backhanding with your left hand and driving through with the palm of your right.

The difference is in the shoulders. In the two plane swing your shoulders will actually be square and feel shut at impact.

When you bring your arms back in front of your body, notice that the right elbow thrusts out more in front. In a two plane golf swing it's very important for the right arm to get back in front of the hip and work down that way to release.

The best way to ingrain this is to hit half shots, so let's look at the right way to do that.

The focus during a half shot drill is on getting the technique correct. In this case you need to imagine that, from the bicep down, once you've set your wrist angle at the top nothing changes all the way into the downswing. 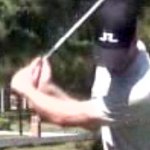 Swing to the top, get a full wrist set, and then hold that position. From the bicep down, nothing is going to change. Just rotate your body down, bringing the arms and club down with all the same angles they had at the top of the backswing.

It's very important not to flip through impact, which is what most amateurs do - they come into impact and throw the club at the ball. The left wrist breaks down, everything breaks down, and the ball goes really high because there's no compression on it.

Just rotate down, keeping all your angles the same. Turn your body through without changing anything. 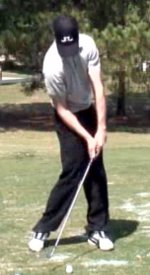 Turn the body through, maintaining all the angles

The club will release. Your momentum and centrifugal force will cause the club to release, but you don't want to actively release it. Keep those angles the same for as long as you can in the downswing.

The same is true in the two plane swing. Your arms will be working more independently of your body, but you're still maintaining the angles and not actively releasing the club.

You don't ever want to throw the club or over-accelerate from the top. Just keep this "package," the same all the way down into impact, then everything releases through.

Practice little half shots, focusing on keeping the arms and wrists quiet, making sure the left wrist is flat at impact and the right wrist stays back.

Get Your Free Membership to Watch "Golf Impact Position Face On" Right Now!