Those of you who have had the opportunity to work with the Putting Plane have certainly seen a remarkable improvement in your putting consistency as you begin to understand your alignment and what the putter is actually doing through the swing.

The Putting Plane does a lot of great things, and is hands-down one of the best, simplest putting training aids we've ever seen. 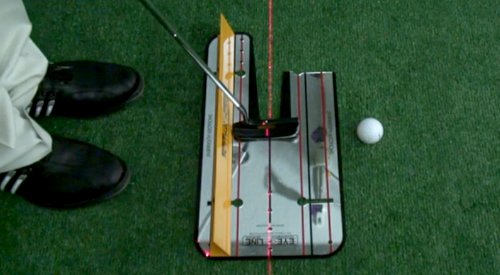 The Laser Line and the Putting Plane

However, as we've discussed in our Putting lesson series, to really improve your putting you have to understand what the putter face is doing.

The Putting Plane training device is great for understanding the stroke and the path of the club, but it can't give you the kind of feedback that would tell you what's really going on with the putter face.

Fortunately, Eyeline Golf has come up with another very simple putting aid called a Laser Line. It simply attaches to the shaft of your putter and projects a red laser line onto the ground. 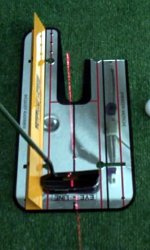 Designed to work on an arc, it points left if the face goes back square

The line is about three feet long, and perpendicular to your putter face so if you're rotating open, the line will point off to the right. If you're taking it back hooded it will point to the left.

The great thing about the Laser Line is that the line stays square even though, when you take the putter back normally, it travels on a slight arc. In fact, if you were to take the face back perfectly square to the target that would technically be considered hooded, and the line would point to the left.

The Laser Line is designed to show you when the putter face is square to the arc of your stroke.

It provides instant feedback so you always know if your putter face is staying square to the arc of the stroke.

It's All About the Face 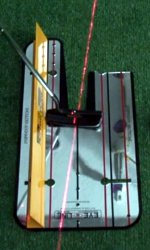 You may see drastic rotation when you first use the device

As we discussed in the Hand Dominance lesson, the alignment of the putter face at impact is what really determines whether or not you're going to make a putt.

It all comes down to where the ball leaves the face, so you need to understand what that face is doing on the way back and, especially, through impact.

Now as you look down at your club you can see the laser line pointing at 90 degrees to the putter face. Simply line up the laser line with the black line on the middle of the Putting Plane device, and keep it there throughout the stroke.

A lot of golfers see some pretty drastic angles the first time they use this training aid. You may be surprised at how open or shut the club face can be while it still looks fairly square to the naked eye. 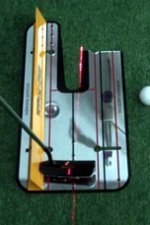 Even if it barely feels rotated, the face may actually be very open

Try turning the putter back and forth a little to get a feel for how open or shut the putter face is when you rotate it slightly with your hands.

If you swing into impact and see that the laser line is pointing to the right of the target line, you'll know that the face is still open and you'll miss the shot to the right. It's very, very subtle and it gives you an exact picture of what the face is actually doing throughout the stroke.

Swing the putter back and forth without the ball a few times, focusing on keeping the red laser line constant on the black center line of the Putting Plane throughout the stroke. Practice until you can keep that alignment even as the putter is in motion.

Again, the face will actually move through a small arc - that's just the nature of the swing - but the Laser Line aid is designed for that, and will display a straight line throughout the swing. 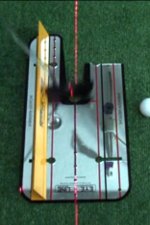 Keep the line constant as the putter is in motion

Practice on a normal arc again, keeping the laser line straight as you take it back, at impact, and as it goes through.

Now you've got all the components of a great putter. The Laser Line allows you to perfect your face alignment, while the Putting Plane improves your path while the mirror provides instant feedback on your setup.

Now practice hitting balls. If you are able to keep the laser line true, your putts will roll very, very straight. If not, the laser will show you if you have rotated open a little bit, or what's going on at impact. 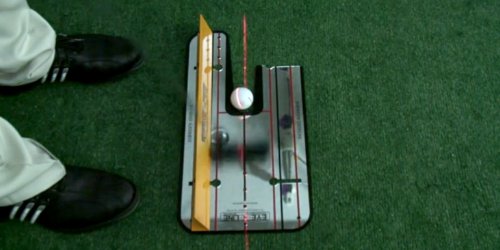 This little device is as good as it gets for showing you exactly what the putter face is doing throughout the stroke, and as we mentioned in the other lesson that's the key to putting.

If you can get the laser line to work straight back and straight through, you'll know the putter is staying on its small arc and will be square at impact. If you can do that, you can make a lot of putts.