Rotary Swing Hitter Backswing and Role of the Right Arm

When we look at the Rotary Hitter versus the Rotary Swinger, a lot of the difference can be found in the golf backswing.

Setup for the two swings is very, very similar, but once the club leaves the ground there are some key concepts that differentiate the two styles.

One big difference is the role of the right arm in the hitter backswing. 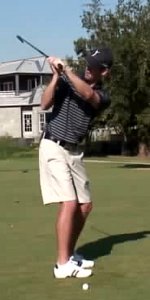 The Rotary Swinger keeps the right arm fairly passive. Going back to the Rotary Drill, one of the key things we discuss is just using the right for support. You don't stick your right arm way back behind the body or out in front of the hip - it's just there to support the club and keep it level.

As you can see in the photo, the right hand keeps the club on plane as you tilt.

The majority of golfers are right handed. Unfortunately, that's actually a disadvantage here. We tend to over-use the right hand, but the golf swing is more balanced than that. The left hand has a bigger role in the swing than most golfers think.

The right arm stays relatively passive in the Rotary Swing, and the right hand needs to remain relaxed. If it tenses up, you end up over the line like in the photo below. 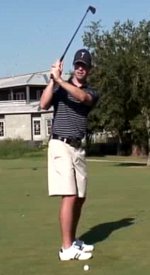 Over-dominant right hand gets the club over the line

You want to keep the right arm in a fairly passive position so the club stays on plane.

For the Hitter, the exact opposite is true.

The right arm is a more dominant part of the golf swing because the Hitter is making a much more compact, aggressive move, going back.

With a shorter, more compact backswing and turn, the Hitter has to actively use the right arm in order to accelerate the club and get any speed. The right arm has to thrust down and extend.

That's why the Hitter's arms get back out more in front of the body. 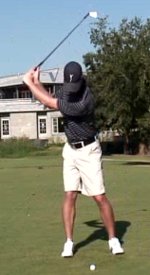 Appleby's club may only be over his head at the top

Stuart Appleby is a perfect example of the Rotary Hitter backswing.

A lot of times with the 5 iron, his club head is almost directly above his head at the top of the swing, while a Swinger would go much farther back.

With the shorter backswing, he doesn't have a great deal of distance to accelerate the golf club. He's coming down on a very direct path to impact so he has to extend that right arm.

To understand this movement, you need to realize that the Hitter is making a very compact move. There's not a lot of hip movement or rotation. It's all very compact. 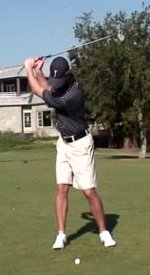 The Swinger, meanwhile, is taking the club back with a very big shoulder turn, almost like Vijay Singh.

Vijay's swing is more long and loose, and he gets a lot more turn coming back through.

Likewise, the Swinger is takes the right arm back into that supportive position and then the left arm pushes it a little bit back behind.

Stuart has a much shorter, more compact and aggressive swing, so his hips have to stay pretty quiet as he goes back.

For the Hitter, once that right arm is fully set, the backswing is done.

The Rotary Hitter swing is like throwing a ball. When you throw a ball, you cock your arm and that's it, you're done. There's no reason to take it father back.

The same is true for the Hitter. As soon as that right arm reaches its full 90 degree angle, it's in the fully cocked position and you're ready to go back down.

Swinger backswing (above) vs Hitter (below)

All you're trying to do is cock the right arm enough to get enough leverage to "throw" the club.

In fact, that's the whole purpose of the Throw the Ball Drill - to learn the feeling of the downswing by throwing a ball down at your golf ball or just in front of the ball.

For the backswing, then, the Rotary Hitter cocks the right arm then fires it down. That's the key. The Hitter should develop a sense of the right arm dominating the golf swing. It goes up, cocks, then fires down. It's a very different feeling from the Rotary Swing.

That's why the Hitter doesn't make a big turn. It doesn't take much to get the right arm back and fully set.

The Swinger goes a little bit farther back and gets a bigger, smoother turn, without such an aggressive acceleration.

That's the first thing to understand about the Rotary Hitter motion. As soon as the right arm is fully set, the backswing is done. There's no need to go back any farther. Learn how to fire that right arm down and you'll get a feel for the Rotary Hitter swing.