How to Hit Penetrating Wedge Shots

Amateurs struggle with hitting wedge shots all the time. Many players have trouble hitting their wedges even a moderate distance because they hit them too high.

We're going to use the example of a golfer with a 60 degree wedge, who is 85 yards out from the target. For many golfers, hitting a 60 degree wedge 85 yards is simply out of the question, but it doesn't have to be. You just need to understand the three keys. Key One: The Right Setup for a Wedge Shot

Buttons are aligned in front of the ball

The first key is setup. The setup is critical for hitting wedge shots, and there's an easy way to get it right every single time.

You're making a shorter swing in a wedge shot so you need a steeper angle of attack. You can easily achieve that at setup by making sure the buttons on your shirt are in front of the ball.

Who Should Do This?

If you have a tendency to slide out in front of the ball and get out in front of it anyway, this advice is not for you. This is intended for golfers who tend to hang back and hit their wedge shots too high.

You want to feel like the buttons on your shirt angle forward toward the target during your downswing.

You want the ball back in your stance so the shaft leans forward and your buttons line up just outside your instep, a couple of inches in front of the ball.

This setup position allows you to come down on the ball sharply, which is very important.

How Do the Pros Do It?

You may be familiar with the golf research done at TaylorMade Performance Labs. TaylorMade has studied the Tour pros and found that their angle of attack with wedge shots averages negative 12 degrees.

That sounds pretty steep, and when you see it, it looks even steeper. 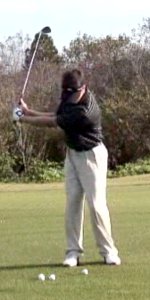 Take the arms back to the 9:00 position

That's why you see a lot of those guys sending out massive divots; they're getting the angle of attack they need to drive the ball low even though the club has a lot of loft and is going to want to put a lot of spin on it.

Driving the ball low is the key to hitting more accurate wedge shots. A wedge shot is not throwing the ball straight up in the air and hitting it as high as you can. You want to hit your wedges as low as possible with a lot of spin.

There's an inverse relationship between loft and trajectory. You may or may not understand the physics, but basically it's all about accuracy.

You need your irons to go really high because they need to land very soft. Wedges are already going to fly high and have a lot of spin because of the loft, so you want to hit them very low.

Imagine throwing a lawn dart. You wouldn't throw a lawn dart straight up in the air because it wouldn't be very accurate.

You want a flatter penetrating trajectory like you see on the PGA Tour. The first key to doing that is getting your buttons in front of the ball. 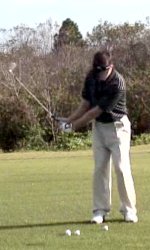 The second key is getting a nice compact backswing and setting up your weight on the left foot. These two go hand-in-hand.

A lot of golfers tend to over-turn and shift on their back foot, and they end up with a big, long, loose swing with the wedges.

You don't want that. You want a short, compact swing without a lot of wrist set. You just want to take your arms back to about 9:00, and back down.

The simplest way to shorten up your backswing is by increasing the weight on your left foot.

If you get your buttons in front of the ball and about 70% of your weight on the left foot, that's going to encourage a steeper angle of attack, which will shorten up the backswing.

Keeping your weight on the left foot means you can't swing back as far. That's perfect, because you don't want a long, loose swing. You want a short, compact swing with speed.

Finally, you want a nice, controlled release on your wedge shots.

You have a shortish backswing with very little wrist set, and you want a follow through that mirrors it on the other side. A big, long, loose follow through would put a lot more spin on the ball, launching it higher and making it difficult to control the trajectory.

To recap, get the buttons on your shirt in front of the ball. Swing shorter, with more weight on the left foot, and follow up with a more controlled release.

These three keys will allow you to take a little 60 degree wedge and hit it 80-85 yards with no problem. You don't have to make a big, long swing.

That's all it takes to be a better wedge player. Remember the three keys and your wedge play will improve, guaranteed.

Get Your Free Membership to Watch "How to Hit a Wedge Shot | Penetrating Wedge Shots" Right Now!