Most instructors and golfers alike consider Tiger Woods setup to be the model for athleticism and balance. For such a relatively static position, Tiger always looks as if he just can't miss when he sets up over the ball.

But that's not what we're discussing here. I'm sure that for many of you, the big question is whether he sets up to be a one planer or two planer, right? The answer to that is that he sets up "athletically".

That's the term I use when I teach anyone, whether one plane, two, or ten. The golfer needs to be poised, relaxed and balanced and Tiger exemplifies that.

One of the big distinctions in Jim Hardy's one and two plane theories is the amount of spinal tilt at address toward the ball. Hardy advocates an angle of 35-45 degrees of forward bend in order to get your shoulders in his 48" zone at the top of the swing.

While the amount of forward bend is a big piece of Hardy's theories, it doesn't appear that Tiger does anything unusual at address. He has a spine angle of about 38 degrees. Not too much, not too little, just right, but certainly fitting within Hardy's guidelines for a one plane swing at the start. 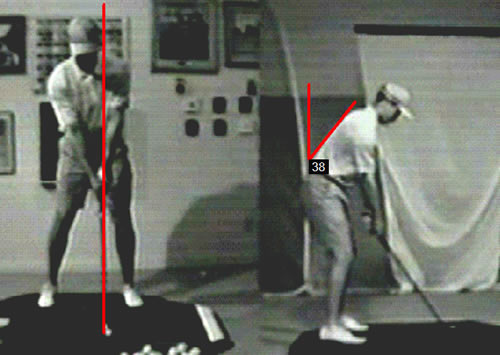 From face on, again, Tiger has a model setup to the golf ball. The ball is just inside his left shoulder, or about where the logo on his shirt would be. His head is also behind the ball, the left side of his head lining up with the back of the ball.

Most amateurs do the exact opposite here having their head way out in front of the ball and the ball too far back in their stance. Tiger's setup overall is very neutral with nothing extreme one way or the other which is the way it should be. You shouldn't be bent over too far for your height and build, nor should you stand up to tall and too close to the ball.

Tiger's arms hang down very naturally from his shoulders with this mid-iron, but not directly below the shoulders. This very slight "reach" for the ball encourages a flatter swing plane and minimizes the amount of wrist cock at address which also tends to shallow out the overall swing plane.

Tiger used to take the club very much to the outside and implement an early wrist cock to aid with keeping the club in front of his body and these setup changes serve to counterbalance those things.

The lesser angle between the clubshaft and arms also makes it easier for Tiger to aggressively rotate the clubface open during the takeaway, but, we're getting ahead of ourselves here, so back to the setup.

Square, square and more square. Tiger has always had his feet, knees, hips and shoulders square at address and that has remained the same here. The only thing the very observant person might glean unique is the position of the right forearm. Note how it actually rests slightly higher than the left at address.

For many years, instructors have taught that there should be a bend in the right elbow and that it should come from underneath to position the right hand on the club. This would make the left forearm visible when viewed from down the line at address. Unfortunately, this encourages a path that is too inside and a plane that is too flat during the takeaway and later encourages you to hit too much from the inside.

A lot of this mindset in teaching has likely developed from the idea of trying to get the high handicap golfer to stop slicing but it's bad advice. Hogan set up with the high right forearm, Tiger does, so do I and that's what I teach. It's a subtlety, but it's a more natural position to be in at address.

Another piece of Tiger's setup worth mentioning is his spinal tilt away from the target at address. Or better yet, the lack thereof. Tiger sets up with his spine more vertical than tilted significantly away from the target. This too, fits in with a one plane setup position.

The last thing I will point out is where Tiger's weight is at address. It's about 50/50 or slightly favoring the left side and spread pretty evenly over his feet. His rear actually sticks out quite a ways behind his heels than a lot of pros, but with his steeper spine angle, it centers his weight nicely.