Arms vs. Body Release in the Golf Swing

One of the things I often refer to in my lessons is to "release the body" and many golfer don't understand what is meant by this. There are two very basic ways of releasing the club to square the clubface. You either release the body through the shot or you release the arms. Understanding these two types of release dictates a great deal what type of things you need to work on in your golf swing.

In general, Rotary Swingers should release their body through the shot and Classical Swingers need to release their arms. Inside this video, we take a look at both. 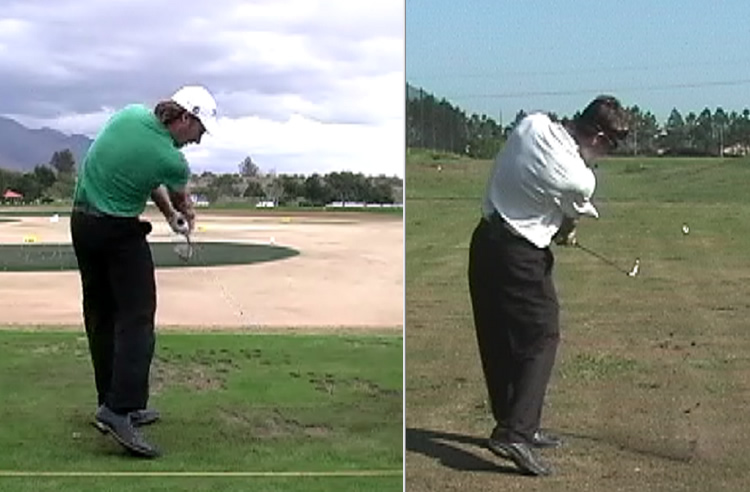 Note the two photos above. In the left photo, this golfer has aggressively released his arms, hands and clubhead to square the face and you can see that at this point in the swing the clubface is very shut, or in a "toe down" position. This can create a great deal of speed but increases the demands on timing and hand eye coordination.

The golfer on the right has the butt of the club appearing to go right through his belly button and the clubhead is still directly in front of his chest. In order to square the club, he needs to continue rotating (ABT) his body and no excessive use of the hands and arms is necessary.

In the golf swing we've talked about the three different types of releases in regards to the club and the hands specifically. We haven't talked about the main difference between what I consider two of the key component releases of the golf club, which is an arms release versus a body release. 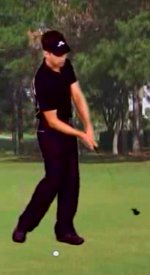 It's very, very imperative that you understand the difference. In a rotary type golf swing, we're looking more for a body type release. It doesn't mean you can't have an arms type release, but it does mean that some aspects of your golf swing will be different and you'll need to change those to compensate.

We need to understand what they are first, so let's talk about the body release first. In the Rotary Golf Swing, we like to get our arms up to a certain position and then rotate our body aggressively on the way down, turning our core, turning our hips, turning everything. As we come into impact, the elbow stays back and we continue to turn.

The key here is, as we turn through the ball, those arms aren't racing out in front of the body until after impact.

What we're looking for into impact is basically the club - it's kind of pointing at our belly button, so you imagine that you're turning your body through and the club is connected to your belly button - as you release through, then your arms of course are allowed to release on. If you're doing a Head Cover Drill then the head cover is allowed to come out. 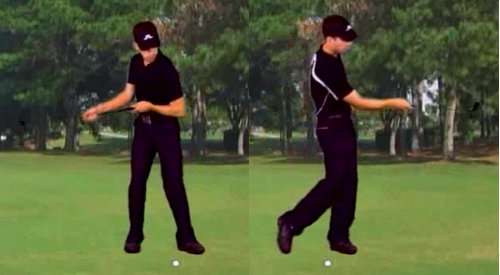 Body release: Imagine the club is connected to your belly button

But we're looking primarily for the body to turn, and then for the arms to release through impact. 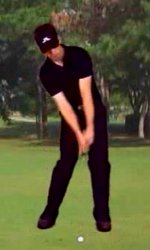 In an arms type release, which you see more commonly in a two plane golf swing, as your come into impact your shoulders are staying more shut and your arms and hands are releasing the golf club. You see this type of release, where you see a lot of extension coming in from the arms and the club is going to start to pass the body a little bit earlier, but you're not going to see the arms staying back and connected to the chest.

In a Rotary Golf Swing release the elbow is staying back a little bit more. As you come into impact you'll see the toe of the club not releasing the same. You'll see it staying more constant through impact. There's a lot less movement through impact, of the club head to square it. 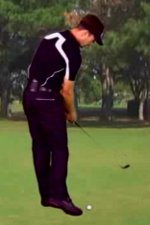 It's that the body, continuing to rotate - remember your ABTs, Always Be Turning - that's what squares the club face and that's why you see the face staying more neutral through the impact area.

In an arms release you see the club head release a lot more aggressively and the body and the shoulders stay back. You get speed by releasing your hands and the club head, and that's how you square the club head.

Those two releases are a very important piece to understand in the golf swing. Let's say you're trying to learn a Rotary Golf Swing but you just know that when you look at it on video and you'll see, typically on video the golfer's arms will be out away from the body and the club head will be down the line this way. 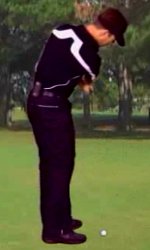 Does that mean you're a two planer? Not necessarily. You can still have a bit more of a rotary type golf swing where you're shallower at the top, you don't get your arms very steep above your head. You're a little bit shallower at the top and you're rotating your body, but it is important that you learn to sync up the release of the golf club with the rotation of the body.

It is easier for you to release your arms and swing your arms more around your body rather than turning your body aggressively and releasing it because that's going to tend to lead to hooks.

If you look at your swing on video and you're saying, "OK, I know he's saying to rotate my body really aggressively and release my body through impact," but you don't realize that you also have an arms release coming through the ball so you get your shoulders open at impact and the club head going like this, and you don't understand why you miss left all the time. This is why.

If you're getting your shoulders open at impact it's important that the club stays very quiet coming through the hitting area and into the follow through. It's more of a body release. 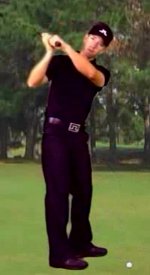 Arms are shallower at the top in the Rotary Swing

Taking the club into your belly button and turning back and through, that's the type of release we get.

If you're trying to be more of a Rotary Swinger and you release your arms it's going to take a little bit more timing to learn how to release the club head consistently through impact.

Obviously, that's not what I recommend. I prefer that it stays quieter. I prefer that it's more synced up with your body and you release your body, but that doesn't mean that it's going to work for all golfers. Some golfers just naturally use their arms and it's very difficult for them to use their body more, coming through the hitting area.

Ideally, what you're going to find for a more arms release golfer, if that's something that you're not able to break, you're going to want to move to more of a hybrid blended golf swing, where you keep your shoulders quieter on the way down and you work to get your arms more in front of your body into impact, and then releasing through. But that's another chapter, another story, another day.

Understand what type of release you have. It's really important that you look at your swing on video to get an idea, saying, "OK, gosh, I see that I'm really flinging my arms through and my shoulders are really square. The club head is really releasing, my hands are really releasing over another." 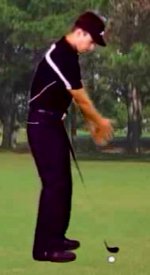 For a hybrid swing, keep shoulders quiet, get arms in front

That's going to lend another hint for you moving to understanding your golf swing a different way and not just being a Rotary type swinger unless you start learning to get your arms a little bit more into your body, turning your body through impact and staying a little bit more connected.

Understanding these two releases is very important, so take the time to look at your swing on video and you'll know what direction you need to go, whether you're more of a one planer, more of a two planer, more of a hybrid swinger.

Learn the differences and understand your golf swing, and see your scores improve.