I can rarely think of a time where I have played a perfectly windless day of golf. I treasure those days because they don't come around too often.

But more often than not, I find myself needing to hit the ball low to keep it under the wind. But it's not just when it's windy that I pull out this shot. The lower you hit the ball, the easier it is to control in general, so when I need to be very accurate and don't have any trouble in front of the green that I must clear, I will hit this boring shot.

It will release a bit when it hits the green, but not a ton because it will have a fair amount of spin because I still hit the shot at full speed with my body, it's just my arm swing that becomes restricted. If you need the ball to release more, you will want to hit it a bit easier with more club to take some of the spin off.

There are two important observations to be made here. First, is the launch angle. While I hit both these 6 irons the same distance, there is a significant difference in launch angles, with the one on the right coming out much lower.

Second, the low shot has traveled much further at the same point in the swing, about 28" more and with 3 mph more ball speed. So how do two golf balls travel the same distance when one is traveling at a higher rate of speed? Trajectory.

Even though the lower shot has more ball speed, it doesn't have the trajectory to travel as far in the air.

Even though the high shot wasn't hit quite as hard, it traveled the same distance because it spent much more time in the air. So, that begs the question, why not just hit it higher all the time since you don't have to hit it as hard and get it to go the same distance? In one word - wind.

At times, you will need all three shots, low, medium, and high to score your best in all conditions. Master these two shots and add them to your shot making arsenal to play your best under any circumstance.

When we're wanting to hit the ball lower - say for instance we've got to go under a tree branch or we need to keep it under the wind - and we need to get this more penetrating ball flight, we need to make a couple adjustments, very slight adjustments, to our swing. 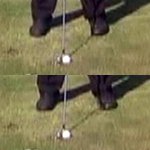 When wanting to hit the ball lower - say for instance, I've got a 6 iron in my hand here and I want to hit it about half as high as I normally would - what I need to do is move the ball back just a tiny amount in my stance.

I'm not going to move it way back where I'm going to be chomping down on it. That's actually going to cause me to put more spin on the ball and hit down on it harder.

I want to move it back just slightly in my stance. Maybe here's my normal address position. I'm going to move it back maybe 1/2", 3/4" tops, depending on how low I need to hit it.

When I want to hit this ball lower I don't want to have this fully released finish because that's going to cause the club head and everything to release. Through impact the club head is going to have more loft on it than I want. I need to come in on a shallow path with the club head delofted. 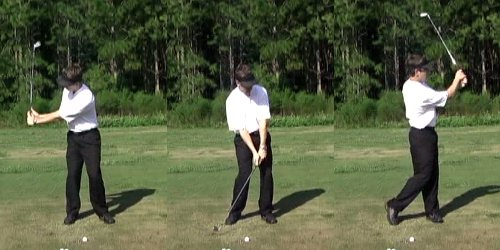 Make a short, controlled 9 to 3 swing

The only way I can do that is to keep from making this big swing back here because that's going to cause a tendency for the arms and hands and everything to release. The farther back you swing, the harder it is to control the club head through impact because there's more momentum on it, so what we want to do is make what I call a 9:00 to 3:00 swing.

Now, your follow through is going to have a bit more momentum so you might go past 3:00, but you want to imagine that you're stopping at 3:00. 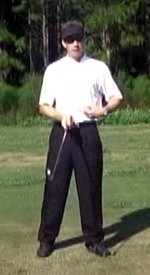 Imagine that the club is connected to your belly button

The 9:00 swing is pretty easy to get on the backswing. You're just going to swing back to here and then rotate through, but of course as the club head speed increases it'll be a little bit more challenging to hold off this finish right at 3:00.

If you're trying to make a full shot - with a 6 iron I would hit, normally, 190 yards and I would want to still hit it close to that distance - there's going to be a lot of club head speed so I'm not going to be able to hold it off right at 3:00 but my visual is that I am trying to hold it off at 3:00.

The reason for that is I want the club head...I want to almost imagine that it's a bit more into my belly than normal.

As I swing back and I get back to 9:00 and I come back into impact, I really want the club head to be pointing at my belly button, and through impact I want to maintain that same sensation. I don't want this motion, to where now the club is pointing at the ground. It's pointing away from me.

Through impact I want to imagine that the club head is pointing at my belly, and that's going to allow me to control the club more with my body and keep it from releasing and adding loft to the club head. 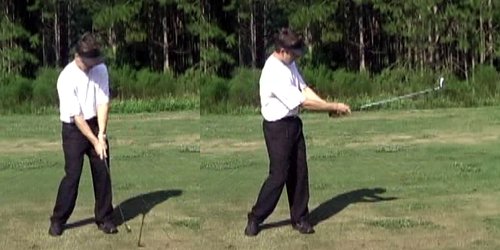 Imagine that the club is connected to your belly

I want to imagine that I'm stopping here, and I'm trying to keep that club more in front of my body, connected more with my belly button through the shot. That's going to allow me to control the shot with my body.

That went about a normal distance for a 6 iron, a little bit shorter than my normal distance. I tried to stop my finish at more like 3:00, and that's keeping that club head from releasing, adding loft and spin to impact. 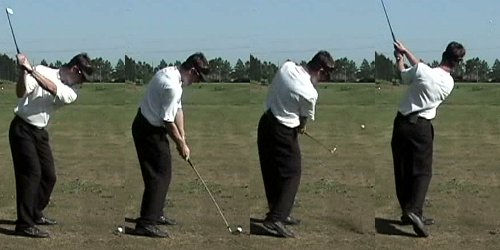 Low, penetrating shot seen from down the line

I'll show you the difference in trajectory here.

That ball went about literally twice as high as the first one did, and all I did there was I simply made my full swing, released everything through, the club head is coming through impact with a little bit more loft. I'm not able to hit through and control it as much with my body.

All you need to do, again, to hit the ball a little bit lower is play the ball back just a touch in your stance, swing back to 9:00, and swing through to 3:00. Imagine that the end of the shaft of the club is connected to your belly through impact, that you're really controlling the shot with your belly.

All the club head speed is coming from your body, the speed of your body rotating through the shot, and that will help you hit the ball a lot lower.

Get Your Free Membership to Watch "Day 5: How to Hit the Fade" Right Now!