Golf Fade, How to Hit a Golf Fade

Once you've learned the basic technique of the golf swing, you can begin learning to work the ball left to right, or a golf fade.

Hitting a golf fade is a very useful shot to have in your game for more reasons than just getting at tucked pins. It is also useful for even the beginning one planer to understand what causes a fade and how to control it because so many golfers struggle with hooking the ball in the one plane swing when they first start out.

Learning how to hit a golf fade gives you something to fall back on when you are releasing the club too much with the arms and hands and can quickly give you the proper sensation you are looking for through impact.

In fact, many golfers I teach who struggle with hooking the ball, when I ask them to hit a fade, they almost invariably end up hitting the ball dead straight.

So even if you are just starting out, don't hesitate to watch this video to get an idea of how to fade the ball.

Note that my swing has remained exactly the same, nothing changed other than the angle of my clubface. I've clearly held on to the release in the picture on the left and this has not only imparted a cut spin on the ball but launched it on a higher trajectory as well when compared to the shot where I hit a draw. 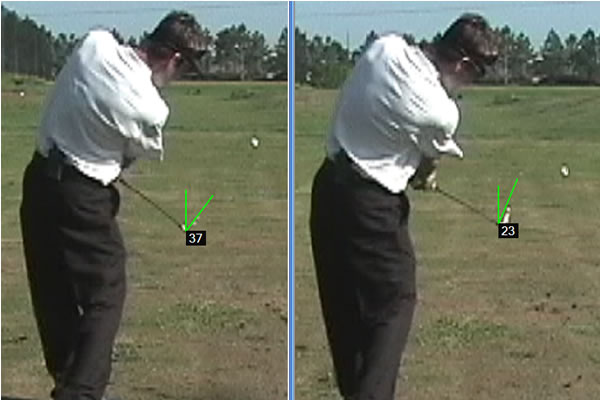 As I come into the finish, you can clearly see the angle in the clubface is significantly different.

The one on the left is much more open as I have worked to keep the clubface open through the shot and the one on the right is more square or slightly closed.

You can also see again the difference in trajectory here, the ball on the right is still significantly lower than that the one on the right. 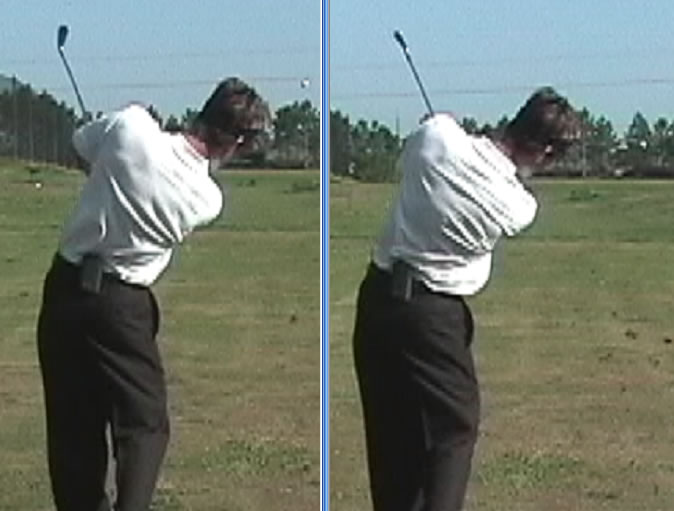 Video Transcription: How to Hit a Golf Fade 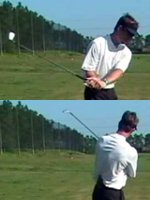 The toe of the club turns over

You notice here as I'm working the club back and forth, the toe of the club is turning over. It's releasing. My arms and everything are just flowing through the shot. I'm not holding onto this release. I'm just letting everything work.

Of course that's going to cause the ball to go right to left. When we want to hit the ball left to right in the one plane swing, again we don't want to change the path of the club head. We don't want to swing dramatically out over the top and cut across and all those things.

We want to still keep everything constant. Our body's still making the turn. It's rotating through, but what we have to do here is keep the club face more open through impact, and we do that with our bodies.

Now to hit a golf fade, I've actually got to cut across it a bit more, in the sense that I don't want the toe of that club head to release. I'm actually going to hold the club head open through impact a bit more, without letting it release like this.

The face of my watch, and my hand, isn't going to shut down and be pointing the other direction. I want to keep that watch working out so that somebody in front of me could almost read my watch through impact.

I'm just cutting it and leaving the club face open through impact. I'm cutting across it a bit more rather than letting the club head release and all those things, or even more so than in a normal swing when I'm coming into impact square and I've got this arm in my chest. I want to do that even more so. 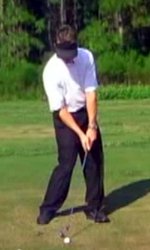 Arm in chest even more than a normal swing

I want to keep this arm back even more and keep that club head open through impact because I want to hold onto it with my body. I don't want it releasing because that's going to cause the ball to go right to left.

What I do for that is rather than making this big full swing and release and coming all the way into a full finish, I'm going to hold onto that release just a bit. My finish is going to be more of a held-off finish here, where you can see I'm working to keep that club face open throughout the shot.

You watch guys on Tour; Tiger Woods is a perfect example of somebody who works the ball on most every shot. When he's practicing, he's making his practice swings to get ready for a shot, if he's working a draw you'll see him make a bit more of a round swing, swing the club a bit more around his body and he's releasing the club head.

If you see him practice hitting a golf fade, you'll see his finish is a bit more like this. He's keeping that club from releasing. He's holding onto it with his body. He's keeping the club face open as long as he can because he doesn't want the toe of the club head to turn over.

As you're making these practice swings to get used to hitting a fade, you want to start to practice keeping that club head from releasing, making more of a held-off finish to keep the toe of the club a little bit more open through impact. 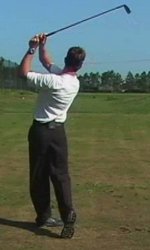 Hold off the finish

I'll hit a small fade here, for the first one. This is like a three yard golf fade.

I ended up right on my target. It was about a three yard cut, and all I did there was simply hold onto it through impact. I made my normal swing, everything else was the same, but through impact I held onto that finish. I imagined keeping my watch facing somebody in front of me and holding it up into the sky as I come through impact.

Then as I take it back I just want to keep that relationship that I had at impact. I don't want to roll the club face open and have to try and time it and square it. I just set it up in the position that I want it to be at impact. 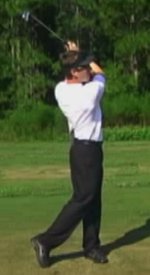 I'm going to swing back and I just maintain that same position at impact, all the way through into the finish.

Again, to reiterate, all you need to do to hit a cut is you're simply working on holding onto that finish. Imagine your watch facing somebody in front of you as long as you can. You're going to open your address position just enough, depending on the amount of cut that you need.

You want your club face at address to more or less point at your target. You're kind of wanting to set it up where you're wanting the ball to end up, and then you're going to maintain that. Keep your swing path and everything the same and just hold that finish through the shot.

You don't want to come into this full release finish where your arms and everything are rotating over. You're going to hold onto that finish and that will work the ball left to right.

That's all there is to hitting a golf fade.

Get Your Free Membership to Watch "Hitting a Fade" Right Now!