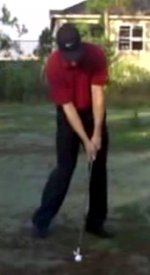 If you look at the golf swings of the great golfers over the past 100 years, you'll start to see what Henry Cotton identified as three different types of releases, which are:

Each type of release has its own key characteristics that dictate a lot of other aspects of the golf swing.

We're going to talk about all three releases today, and explain how they work within the Rotary Golf Swing. 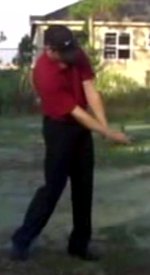 The first release we're going to talk about is the easiest one, and one that is well suited to many golfers. It's called the Slap Hinge Release.

A Slap Hinge Release works with a neutral or strong grip.

As you come down into impact your hands are flat and your wrists are leading. Then, just after impact, your left wrist releases up and the right hand releases underneath.

We're always telling you to hit down on the ball. Why would you ever want to do this?

You're still hitting down on the ball. That doesn't change. You're coming down into impact leading, and then your wrists release this way.

Who should use the slap hinge release? 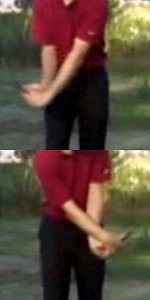 Wrist movement alone can generate a lot of speed

The Slap Hinge Release is a great option for anyone who struggles with getting enough club head speed.

If you just stand there and flip the club back and forth with your wrists, you can get the club head moving reasonably fast. If you do it with some speed, you can even start to hear the shaft cut through the air.

It's all just hand motion - hands and a little bit of arms - creating all that speed.

A lot of golfers do this when they hit a flop shot. You've got the club face wide open, you come back, and then you're trying to release it and add loft to the club head through impact.

Getting the left hand to release just after impact provides a lot of speed without a lot of effort.

The Drawback
The problem with the Slap Hinge Release is that it's difficult to control the timing of that release, and very difficult to keep the trajectory down, because the slap hinge adds loft just after impact.

As a result, this release is great for golfers who swing without a lot of speed or strength from their core, midsection, hips, etc., because it helps them get some speed.

It's particularly good for older golfers, as long as you're able to control the timing of that release.

It's definitely a challenge to control the timing of the Slap Hinge Release through impact with your hands releasing that way, but it's a great way to get some extra club head speed, and it works perfectly well in the Rotary Golf Swing.

Up next is the Crossover Release. This is one of the most common releases among better golfers. 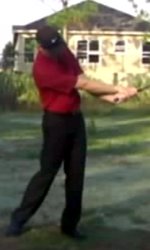 Unlike the Slap Hinge, where you're coming through and your right hand is almost working underneath the left, in the Crossover Release the right hand works more over the left.

You see a lot more right hand rotation, while the left forearm rotates counterclockwise through impact.

From down the line, the most noticeable characteristic of golfers who use a Crossover Release is that, as they come through, the club face will point down at the ground just after impact because they're releasing the right hand.

The Crossover Release works very well with neutral and even the weaker grips. It can be done with a strong grip, but you would have to come through and have to release it a little bit later because the club face gets really shut coming into impact. It would be difficult to time it.

Both the Slap Hinge and the Crossover Release require elements of timing; the Push Release less so. 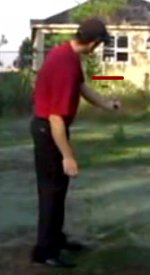 The club face points down at the ground

The good thing about both of these releases is that they add club head speed. If you use a Slap Hinge you'll see that the club head will tend to come through a little bit more up or neutral, compared to a Crossover Release.

In the Crossover, it's the sidearm throwing motion that adds club head speed through the impact area. That's why it's another great way to release the club head. You'll see a lot of professional golfers releasing the club in this way.

Pros such as Ernie Els get a lot of release with the right hand as they come through impact. We talked about it when we looked at his golf swing from down the line in the Members Vault. You saw his right hand coming in and releasing through impact.

This release also works just fine in the Rotary Golf Swing, as long as your arms are rotating back and through correctly. 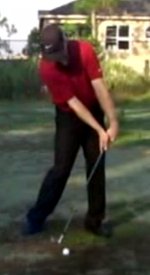 If you take a weak grip, your hands are really on top of the club. As you come down into impact for a Push Release, the club face is going to want to stay more open and not get a lot of release.

A weak gripper who attempts the Push Release is going to tend to miss shots out to the right. A stronger grip will have more success with this type of release.

As you come down into impact and get your hands leading the club head with a stronger grip, now the club face is square.

Be aware that this release is completely different from the other two. If you're the kind of golfer who likes to feel the release of the club and get that sensation through impact, the Push Release may take some getting used to.

As you're coming down, you're almost going to feel like you're holding off the release to fight a shot going left. 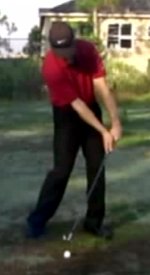 The big advantage of the Push Release is that it helps bring your trajectory down for a flatter ball flight.

The problem with it is that it's more difficult to learn than the other two, and it doesn't necessarily help if you don't have a lot of club head speed.

You're not releasing with your hands for added club head speed as you come down. You're releasing down, maintaining lag coming down, then hitting down, so there's no extra hand boost at the bottom.

It's a more challenging release to learn. You do get a little more hand speed because you're maintaining lag coming down, but you don't necessarily get the as much as someone who's going to do a Slap Hinge or a Crossover and release it through that way.

Which One is Right for You?

Choosing a release is really a matter of understanding your golf swing.

The stronger, more aggressive hitters are probably going to want to learn a Push Release, to maintain the angle, keep the wrists really flat after impact, and keep from flipping the club face over. It will help you control your direction and get the speed you already have under control.

Take a look at your golf swing on video and see what tendencies you have. Think about your misses; do you tend to not have enough speed? Do you have plenty of speed but not very good directional control so you're not very stable through impact?

Identify the characteristics of your swing, then take a look at these three releases and see which one is the best fit for you.