Ben Hogan's address position has been considered a work of art for decades and is something that has been studied by many golf professionals.

Jim Hardy has stated that his concept of the one plane swing is based off of the swing and setup positions of Hogan, but there are many discrepancies that warrant a closer look.

1. Spine Angle
Hogan's spine angle at address with a driver was approximately 29 degrees and this remained fairly constant throughout the set. You can see in the photos below of a driver on the left and a 7 iron on the right that it didn't change much from club to club.

Hogan stood 5'8" tall which is pretty close to the average male height in the US, so this can act as a guide for many golfers learning the one plane swing.

It is NOT necessary to be overly bent over at address. 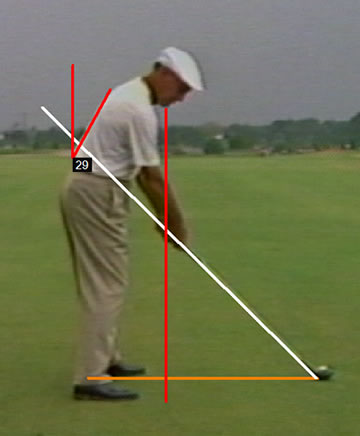 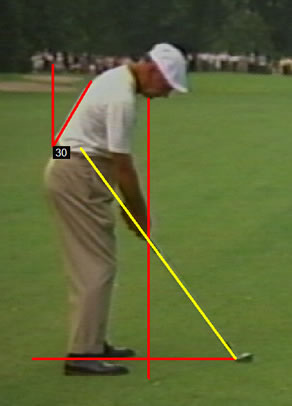 2. Length from the Ball
One of the ways I check to make sure I'm setting up from the ball the same distance when things go awry is to setup, and then lay the club straight down from that position.

In general, I will have about 1.5" of grip sticking out behind my left foot with each club in the bag on average. As I move to the shorther clubs, this number increases a little as the club sticks out a little further each time.

With the driver, it is almost level, or just slightly sticking out behind my left heel. This simple check allows me to setup the distance from the ball everytime and have a point of reference.

From the pictures above, you can see how far Hogan setup away from the ball with each club. With the driver, you can see from the orange line (the line is the same length as his driver) that the butt of the club would line up roughly with his left heel.

With the 7 iron, in the photo on the right, he standes significantly closer with his arms closer to his body and the butt of the club would stick out well behind his left foot.

3. Arm Position
With the driver, Hogan extended his arms a bit further away from his body than he did with all his other clubs.

This is very common and seen in almost all better golfers as it is simply making an allowance for the flatter, more roundish nature of the swing with the longer clubs. Hogan's hands progressively got closer to his body with each club.

The photos below show Hogan with a 2 iron on the left and a pitching wedge on the right, where his hands are almost touching his thigh.

Another interesting and often overlooked aspect of Hogan's arm position at address is the fact that his right forearm, particularly with his driver, sat considerably higher than his left.

In fact, if you look closely at the driver photo above you can actually see the bottom of his left forearm beneath the right. This is the exact opposite of what has been taught for years but is an important piece of Hogan's overall setup.

It is partly due to his weaker right hand grip which has the right hand sitting more on top of the club and partly due the fact that Hogan sat up to the ball with his entire body open to the target except for his feet, which were closed.

It is often taught that you should be able to see the left forearm at address above the right and there should be a slight bend in the right elbow at address. 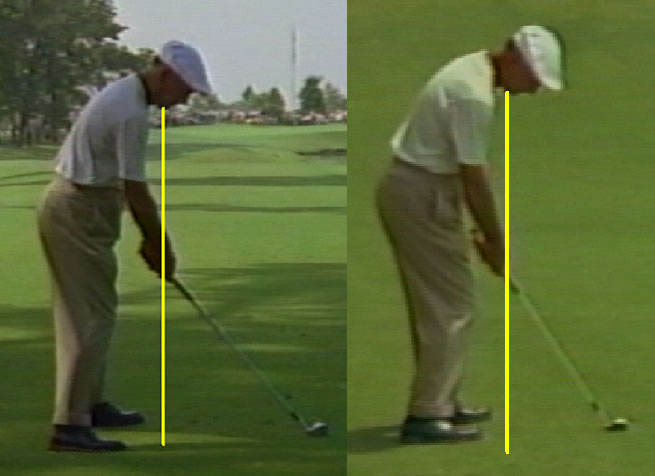 4. Body Alignment
As I mentioned, Hogan setup to the ball with his shoulders and hips open to the target with his feet closed. Hogan's hips were open to the extent that you could see the back of his left pant leg from down the line. This, along with his grip, encouraged his right forearm to ride a little higher on the club and have his forearms aiming a little left as well.

All these things put together helped him have a more level look with his shoulders at address rather than the very low right shoulder that is taught today. Because Hogan swept the club to the inside more than most, this position at address helped keep him from getting the club too far around and too deep during the backswing.

Many golfers learning a one plane swing setup very square with the right shoulder significantly lower than the left and then sweep the club to the inside, ending up with the club too deep behind their bodies and too around. Hogan helped prevent this with his setup.

5. The Right Knee
Hogan kicked his right knee in toward the target at address. This move also helped open up his hips at address, but most importantly, it gave him a brace for stability during the backswing to prevent any bowing of the knee or sliding of the hips.

This fundamental made it easier for him to start his downswing as it increases tenson in the core of the body.