Much discussion has been brought on by Jim Hardy's parameters for a one plane swing and how you can't mix fundamentals etc. Hardy mentions Ben Hogan on numerous occasions as being the ultimate one planer, and I agree.

Ben Hogan often spoke of having the club, his shoulders and left arm all on the same plane and more or less dug the concept of a one plane swing out of the dirt.

However, there are several key fundamentals that Hardy believes are of absolute importance that Hogan does not fit into that I think have led many golfers astray and caused them to try and achieve unnatural positions in their golf swings, positions that are not suitable for their body types.

As many know, Ben Hogan stood 5'8" tall, thus, putting him very close to the average height of all men in the US at 5'9". Given this fact, it is important to understand that the shoulder plane at the top of the swing is something that the average golfer may not be able to fit into Hardy's guidelines and should not try to do so.

As you can see from the picture below of Ben Hogan hitting a driver, his shoulder plane falls just outside of Hardy's guideline of 48" outside the ball. For reference, this was calibrated off the known length of Hogan's driver. 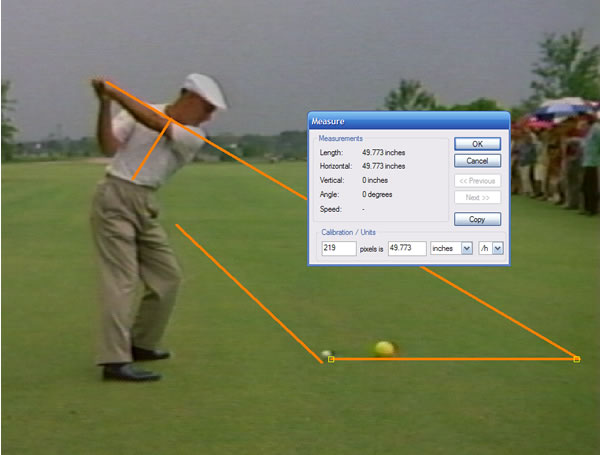 Hardy prescribes that the shoulder plane should "point close to the middle of a zone anywhere from the ball to within 48 inches beyond it." He later says in his book that you should "not let the plane of your shoulders wander toward a point more than 48 inches outside the ball, or else your backswing shoulder plane will become much too flat."

For a golfer of greater than average height, this advice applies fairly well and can be seen in his top student, Peter Jacobsen, who stands 6'3" tall. Hardy, himself, is also over 6' tall.

But what about the majority of the rest of the golfers who are of average height?

They have a couple of options. They can stand with more tilt and with the ball further away from them at address; although, almost all golfers of average height will feel this is very unnatural and unathletic.

Or they can ignore this advice and do what feels more natural, using the 48" zone as a rough guideline. It is silly to think that two golfers varying in height by 6 or 7 inches, using identical length clubs, would feel comfortable with the same amount of spinal tilt at address.

If you were to swing a 60" long driver and then pick up a child's club, you would naturally adjust your spine angle accordingly. While I do agree that the one plane swinger should have more tilt at address and throughout the swing than what is required for a two plane swing, it is not necessary to fall into a 48" zone in order to swing the club well on one plane, just as the great Ben Hogan demonstrates here.

The best advice you can take? Be athletic, tilt your spine and swing the club on a natural arc, letting your body be the engine of the swing.

Get Your Free Membership to Watch "Creating a Swing Plane" Right Now!